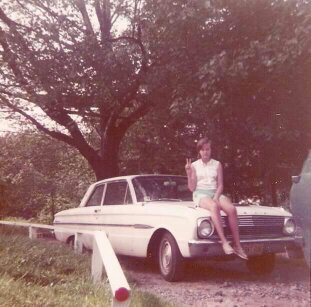 In late August of 1969, a very dear and wonderful blessing came to my life. It was a blessing that was given to me, beyond my wildest imagination. Now, over 50 years later, it still amazes me the sequence of events that was an incredible blessing to my life.

My cousin, Wes Mabey, was about 10 years older than me. Wes lived in Towaco. Back in late Summer of 1969, Wes got a promotion at his job. He was now the Supervisor of the Machine Shop of a small manufacturing company that was located on Route 202 in Towaco. And, as almost required with a work promotion, there’s the calling to buy a new car. And, that’s just what my Cousin Wes did. He bought himself a new car!

As fate would have it, the Ford Dealer, where Wes was buying his new car, wasn’t willing to give him a really good deal on the trade-in for his 1961 Ford Falcon. So, without thinking twice, before he bought his new car, Wes drove to the old Mabey Homestead.

It was a Saturday in late August. I remember this all so well. We were all eating lunch at the kitchen table, when suddenly we heard a car horn honking in the backyard. It was Cousin Wes in his 1961 Ford Falcon. Dad got up and looked out the back window of the kitchen.

“It’s Wes,” Dad said to all of us. And with that, Dad proceeded to go outside and I followed him.

“Hey Unca Dick,” Wes called out to my father as Dad and I walked out to the back driveway.

“Hi Wes,” Dad replied. I gave a hearty greeting to my cousin.

“Never guess in a million years!” Wes said to Dad.

“I got a promotion at work!” Wes said.

“And that ain’t all,” Wes announced.

“Well, here’s the good part. I figure Richie here’ll be driving soon. So’s I figured I give you the offer of a lifetime!” Wes gleefully announced.

“You got it, Unca Dick. I figure I’ll sell it to my favorite cousin here. Say, for a hundred dollars,” Wes announced.

“What do ya’ say, Richie? How’d you like to be the proud owner of this deluxe Ford Falcon?” Wes asked me.

“I sure would Wes,” I happily replied.

Well, one thing led to another. We all came into the house. Mom offered Wes some lunch, but he said that he just had a hamburger at Moe’s Sweet Shop. We all sat around the dining room table. Dad went upstairs and came down with five 20-dollar bills. Dad and I agreed that I would pay him 10 dollars a month, till I was all paid up. At the time, I had a little business of my own, where I would mow neighbors’ lawns.

We signed the paperwork of the Bill of Sale at the kitchen table of the old Mabey Homestead. I was now the proud owner of white, 1961 Ford Falcon. Dad and I went to the Ford Dealer with Wes. I remember that at the Ford Dealer, Wes bought a shiny, red Ford Galaxie 500. It was a sharp looking car.

Outside the Ford Dealer, Dad and I said our goodbyes to Wes. We both wished him good luck with his new car. Dad drove us home. I wouldn’t get my driver’s license for another year, but I felt like I was walking on air, being the new owner of this great, classic 1961 Ford Falcon. A new era of my life was dawning.