The Railroad That Wasn’t in Morris County

Often the fugitive slave had the clothes on his back as his only possessions. (New Jersey Historical Commission) 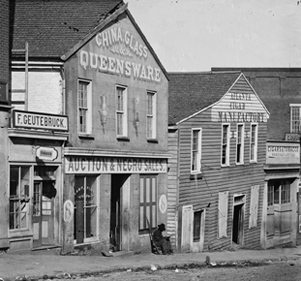 The fear that traveled with the runaways was being captured and returned to the slave auction block. (Library of Congress)

The Underground Railroad is an epic American story featuring the forces of righteousness against evil, locked in a moral combat. The fight would eventually eliminate one of the greatest expressions of inhumanity: the ownership of one human by another.

In the years up to the start of the American Civil War (1861), New Jersey was a major route for slaves escaping their masters in the South. The legendary Underground Railroad (UGRR), which was neither underground nor a railroad, is preserved today at sites throughout the region including Morris County.

Most Underground Railroad fugitive slaves came from Kentucky, Missouri, Delaware, Maryland, and Virginia. Most were males between the ages of 15 and 30, who traveled alone, by foot, horseback, wagon, stagecoach, train, and boat—and at night, often guided by the North Star.

While most people have heard of the Underground Railroad, few people know that it came as far north as Sussex County. Most UGRR books list Jersey City as the railroad terminus.

There were people like Harriet Tubman who was a major figure in the Abolitionist movement. Maryland put a $40,000 bounty for her capture because she encouraged and strongly advocated freedom for the African slaves.  She is credited with helping over 300 slaves reach freedom. She was never apprehended.

There was always a bounty on the head of the runaway slave, from $50 to $500, depending on the value of the slave as a chattel, as was the horse.

Until the outbreak of the Civil War, New Jersey continued to bear witness to the presence of runaway slaves. However, with the passage in 1804 of the New Jersey Act for the Gradual Abolition of Slavery, these fugitives saw New Jersey as part of the “Promised Land,” where they escaped their master’s lash, or worse.

There are several sites in Morris County which are documented by the New Jersey Historical Commission and listed as “Communities with extant Underground Railroad Sites.”  Boonton and Boonton Township are two sites that are preserved.

One of the more conspicuous stops on the Underground Railroad was the Boonton home of abolitionist Dr. John Grimes. There, at the corner of Main and Liberty streets, the doctor harbored fugitive slaves, according to Grimes’ 1875 obituary in The Jerseyman. The railroad’s “Boonton Station,” is now home to a commercial business, and never was underground.

Boonton was an epicenter of anti-slavery work. It was considered an important Underground Railroad link in the New Jersey chain that moved some 40,000 slaves north to freedom in Canada.

Grimes lived there while publishing his monthly newspaper, The New Jersey Freeman, an abolitionist newspaper, and he sheltered runaway slaves in his home.

The Grimes Homestead, in Mountain Lakes, is one of the few documented physical remnants of the UGRR, and the Abolition movement of the 19th century in New Jersey.

Near Grimes’ home, in neighboring Boonton Township, is another station, the Powerville Hotel. It was owned by Nathan Hopkins, whose son Charles became involved in the railroad as a teenager.

Hopkins indicated there were Underground Stations at Rockaway, Dover, Pequannock, Newfoundland, Stockholm, Canistear and Charlotteburg, areas at the convergence of Morris, Passaic and Sussex counties.

In the Northeastern part of the state, in Morris County, are Dover, Rockaway, Pompton Plaines, which were UGRR communities. However, there was no town called Randolph, until it was split off from Mendham in 1805, and it is there where a UGRR site and a probable extant building remains.

For decades a rumor floated that the (Quaker) Friends Meeting House (circa 1757) in Randolph was an Underground Railroad station. James Brotherton, a member of one of the founding families, speaking of his father Richard in A History of Randolph said, “Richard was a kindly man, often helping those in need. He felt that slavery was a great wrong and his house, along with the Quaker Meeting House became one of the stops on the Underground Railroad…”

The popular story states that fugitive slaves on the way to freedom in Canada, would stop and rest at the Brotherton house. Richard would feed them, clothe them, and give them a little ready cash, according to his son.

To protect these unfortunate persons from search and seizure by authorities, a secret passage from the Brotherton house to the Quaker Friends Meeting House supposedly existed. With the physical altering of the landscape by developers, it may never be known where exactly that secret passage was.

Should the authorities enter the meeting house itself, with or without respect for the sanctuary, fugitive slaves could be concealed in the gallery with the “shutters” closed, or in a space under the seat where the elders sat.

No fugitive slave was ever reportedly recovered, and the number of slaves sheltered at the Friends Meeting house remains unknown.

The story is derived from Richard Brotherton, who is later repeated as a Newark News feature story.

Those slaves who were not rescued by the Underground Railroad would have to wait until the end of the Civil War and the ratification of the 13th Amendment, on December 6, 1865, for their freedom.

The Underground Railroad was for the slaves who had escaped the terror of recapture, an opportunity to befriend people who were sympathetic to their plight, and to live free.