The Summer of 1969: A Most Sacred Moment in Time 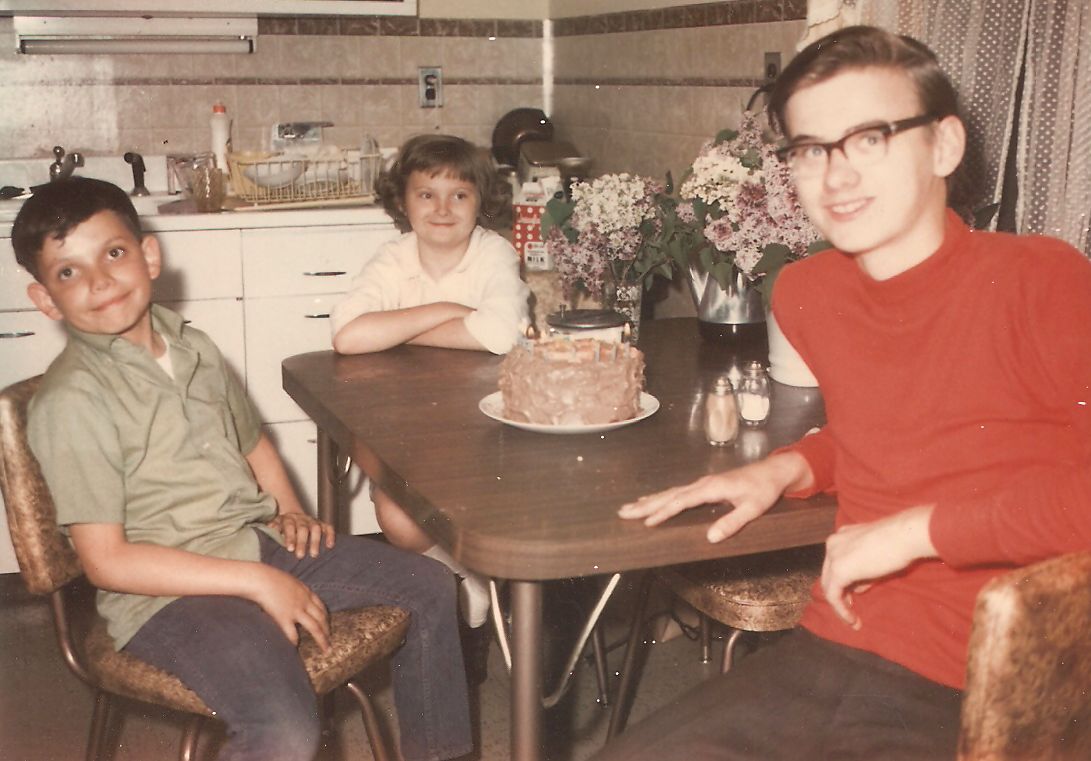 Our true-life story so far: It is the afternoon of Thursday, the seventeenth of July of 1969. I had just completed painting the entire length and breadth of Thorpe Hall at Saint Andrew’s Episcopal Church, for my service project for the coveted rank of Eagle Scout. I had also painted all the downstairs Sunday School classrooms. The project had taken me several weeks to do. I walk home to the old Mabey Homestead on Main Street, near the Towaco border.

It was the seventeenth of July of 1969, about one o’clock in the afternoon. There beneath the big maple tree, the very tree that I had built my three-tier tree fort upon, sat my sister Patti and my cousin Eddie at the picnic table. As I walked down from Route 202, along Mabey Lane, I could see that they were intensely planning something.

When I reached the picnic table, Patti told me that she and Eddie were planning Aunt Helen’s birthday party for tomorrow. Aunt Helen, who lived with us at the old Mabey Homestead, was about to turn 67. Aunt Helen had been a widow for many years. She wasn’t really our aunt, but rather a first cousin to my Mom. Since my Mom was the youngest of nine children and her mother was the youngest of 11 children, Mom had cousins that were old enough to be her mom or dad.

Eddie and his mom and dad, Uncle Ed and Aunt Joy, lived next door to us in the little house at the corner of Mabey Lane and Main Street. Uncle Ed was one of Dad’s older brothers. Eddie was like a brother to me, in growing up in Lincoln Park. Eddie was the same age as my sister Patti, both being five years younger than me.

There was a certain joy, an exuberance, a childhood magic, in Patti and Eddie’s voices as they told me their big plans to have a surprise birthday party for Aunt Helen. If truth be told, I am ashamed to say that I had totally forgotten about Aunt Helen’s birthday. But my sister and cousin had held the day, dearly in their hearts.

For Patti, Eddie, and myself, it was as if the good Lord had given us a third grandmother, in having Aunt Helen be a part of our lives. She was a most kind and caring woman. Aunt Helen was a great story teller. Her husband, Uncle Bill, drove a coal truck in Brooklyn, where the two of them lived when they were younger. Sadly, Uncle Bill passed away with a heart attack, when he was only middle aged. Aunt Helen had now lived with us for a good 10 years or so.

As I sat at the picnic table, with Patti and Eddie, they brought me into their world of being 10 years old again. At the age of 15, it was a magical place that I had totally forgotten about. I had been lost too long in worrying about Mary Tafano, the cute girl who lived down the street from me. I had been lost in false hopes that my swimming instructor, Lisa Ann, would actually go with me to the church’s youth group ice cream social. It was at best, a lost delusion since Lisa Ann was three years older than me and attending Paterson State College.

This was a magical place, sitting at the picnic table with Patti and Eddie. They had allowed me to be a part of their wonderful and enchanting innocence. They lived in a mindset that didn’t worry about an Eagle Scout project. They weren’t concerned about getting into college. They knew not the pains and agonies of going to an overcrowded regional high school, three towns away.

“Let’s bake a cake to look like the Empire State Building and we’ll put a big gorilla on top of it, to look like King Kong,” Eddie laughingly said.

“No, let’s bake a cake to look like Cinderella’s castle,” Patti said with a song in her voice.