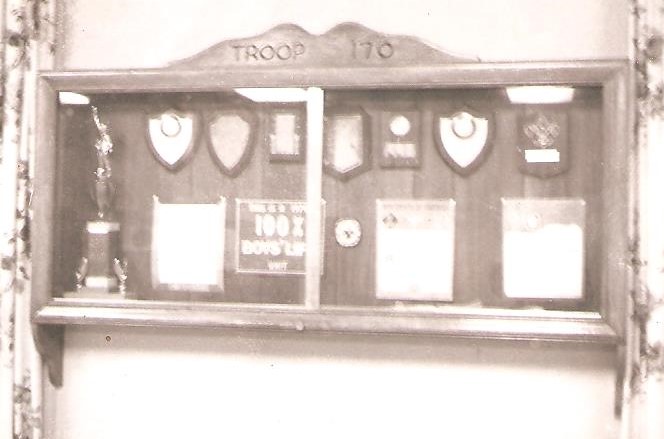 Our story so far: It is now Saturday, the morning of the twenty-eighth of June of 1969. I am still working very hard on painting the infamous Thorpe Hall of Saint Andrew’s Episcopal Church, for my Eagle Scout Service Project.

The beautiful wooden trophy class for Boy Scout Troop 170 was designed and built by Assistant Scoutmaster Jack Floyd Sr., back in 1963. It was a monumental treasure of the scouts and scout leaders of the troop. And, now I was about to take on the awesome responsibility of moving it from the wall of Thorpe Hall.

It was the last Saturday morning of June. I am ever so grateful that by the grace of the good Lord, I kept my old diaries. Dad had driven me down the mile of ribbon of road of old Route 202, also known as Main Street, early that Saturday morning.

“Now, Richie, this is gonna be heavy. Real heavy. The important thing is to get a good grip, with both hands,” Dad said to me as we both looked at the treasured trophy case.

“I will Dad, I’ll be sure to get a good grip,” I replied to my father.

“I’ll take the left side, you take the right,” Dad told me.

As we both approached our appropriate ends of the trophy case, we both took firm grips on the bottom corner with one hand and the side edge, with another hand. Dad looked me square in the eye.

With a most serious expression on his face, Dad looked directly at me and simply said, “okay, Richie, on the count of three. One…. two…. three.”

I remember so very well lifting the trophy case from the bolts on the wall, then carrying it to the middle of the Thorpe Hall, then gently placing it on the floor. Dad and I both looked at each other with a sense of having just accomplished a great feat.

“I’m proud of you son. You done a good job,” Dad most sincerely said to me.

“Thanks, Dad,” I shyly responded.

It felt good to have my father tell me that he was proud of me. Now, I simply had to take all the curtains off of the windows to ensure that paint did not get onto them. Dad helped me with this big task, as there were at least 10 windows looking out to the parking lot of Thorpe Hall.

When the last curtain was taken down, Dad surprised me by asking me if I wanted to go Moe’s Sweet Shop for lunch. There was no hesitation on my part at all. Moe made the best cheeseburgers in all of Lincoln Park.

Before we walked out of the side door of Thorpe Hall, Dad looked back at Thorpe Hall and said to me, “you’re doing a good job Richie. You’re really gonna earn your Eagle Scout medal.”