Those Jumbo Fiddles in Mount Olive 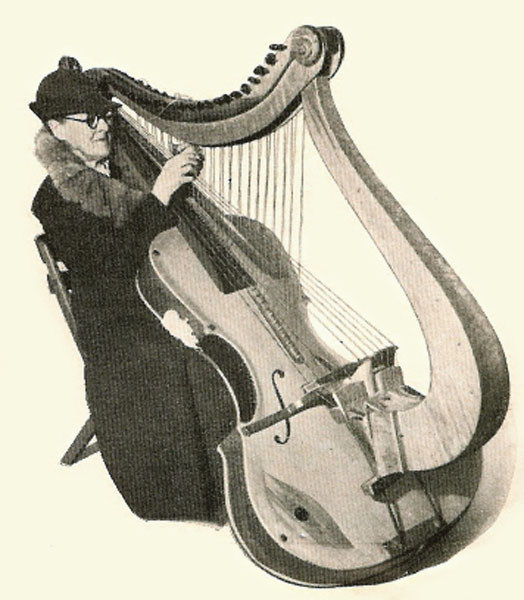 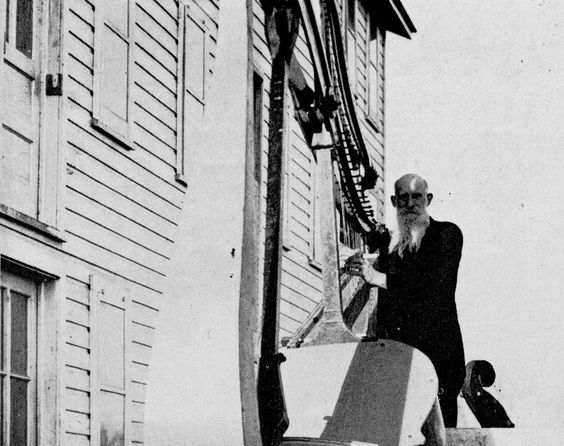 The five-foot-high raised platform pictured was required to play his jumbo harp with his Ferris Celestial Orchestra. (credit author’s collection.)

Mount Olive resident Arthur K. Ferris became famous for his hobby – creating “jumbo” musical instruments. During his lifetime he worked in Flanders/Ironia area, and the 1940 U.S. Census lists him as living at Main Street, in Mount Olive. Born 1871, in Madison, Wisconsin, and lacking any musical training or carpentry skills, he worked as an estate caretaker and landscape gardener.

During the cold months, he had essentially no work to do outside so he began making musical instruments to occupy his time. At first, he had tried creating crude fiddles but failed miserably.

Ferris’ hobby of making jumbo violins started one winter night around 1924. During the winter months and over the years Ferris created many instruments, from a small “angel” violin to a combination harp-violin with strings one hundred inches long.

According to his wife Bertha, he was inspired by the angelic music of the Seventh Day Adventist Church, where he was a member.

Bertha related in a newspaper interview in 1940, that in 1924, Ferris had a visionary encounter with the angel Gabriel. Gabriel gave him detailed instructions on how to build massive angelic-sounding instruments, according to angelic designs.

The Ferris’ together devoted their lives to Christian ideals of the Seventh Day Adventist and used music to spread the Word. Bertha was not a composer; she was the chief performer in his ensembles and provided her original contribution during ensemble improvisations.

“Then,” Arthur’s wife recounts, “a voice spoke to him. “I’m Gabriel,” it said, “you write this vision and make it plain that people may read it. You make these instruments and show these people that the word of God is true.’”

The instruments ranged from a tiny angel violin barely a foot and a half long to a 300-pound goliath among fiddles, the world’s biggest bass viol. It stretches 14-feet from top to bottom and its strings were 104 inches long.

Even more massive was another product of Ferris’ upstairs workshop. It was the biggest harp in the world. When completed it tipped the scales at more than 400 pounds. Eighty-three of the 99 strings were made of steel. Some of these vibrating wires were nearly 100-inches long.

One remarkable feature of the massive harp was a row of double strings forming a series of “Vs.” Opposite strings were tuned differently. When one was plucked, sympathetic vibrations were set up in the other, producing unusual tonal effects. Two or more musicians could play on different parts of the great harp at the same time. The vibrations could only be felt when played inside a barn which acted as a giant resonator

Arthur Ferris’ Big Fiddle was recorded in the Guinness Book of World Records as the world’s largest viol; a five-feet-high by eight feet raised platform was required to play it with his Ferris Celestial Orchestra.

Ferris’ local success slowly began to spread to nearby states. However, the booming tones of the big fiddle were heard from coast-to-coast when the first musical performed on a nationwide radio program. Questions about the concerts and his unique orchestra reached as far as Ohio. Ferris’s music was played on a New York radio station, featured in Ripley’s Believe It or Not show, and featured in Popular Science magazine.

The owner of a cabaret offered him $25 a day for personal appearances with the world’s largest fiddle. Devoutly religious, he turned down most of the offers as he would permit nothing but sacred music to be played on his instruments

As a present for his wife on her 60th birthday, Farris designed a huge “whispering harp.” The sound from the harp’s vibrating strings grew in volume as it entered a large violin-shaped body to which the harp had been attached. On his wife’s “whispering harp” – one plays the harp strings while giant violin strings sympathetically resonate on the cello-like body.

Before Ferris took up his unusual hobby, he could not tell one musical note from another. It was after he began making his first unconventional instruments that he began to learn how to play them.

The superb workmanship shown in some of his instruments is amazing since the fact that he possessed little natural ability as a carpenter. He had difficulty driving a nail into a piece of wood and even sawing a straight line. Two of the violins made by the self-taught craftsman sold for $500 each, a fancy price in those days, and similar sums had been offered for other instruments.

More often than not, he shaped his novel additions to the orchestra from green unseasoned wood. Ferris was familiar with the characteristics of many local trees and the qualities of their wood. Each instrument uses a combination of woods, chosen as much for the Biblical virtues they represent and structural potential. Each instrument of his Celestial Orchestra was for sacred music (although he permitted one to be played for profit).

He claimed he could notice no difference in the tone of the instrument before and after the wood has been completely dried out. Only rarely did he buy seasoned boards.

Although none of his written compositions survive, the Ferris spirit is amply contained in the 20 or more string instruments made in the 1920’s and ‘30s, a dozen of which are found in the Schubert Club Kugler Collection in Minnesota.