Troop 8 Commemorates Centennial All Year Through 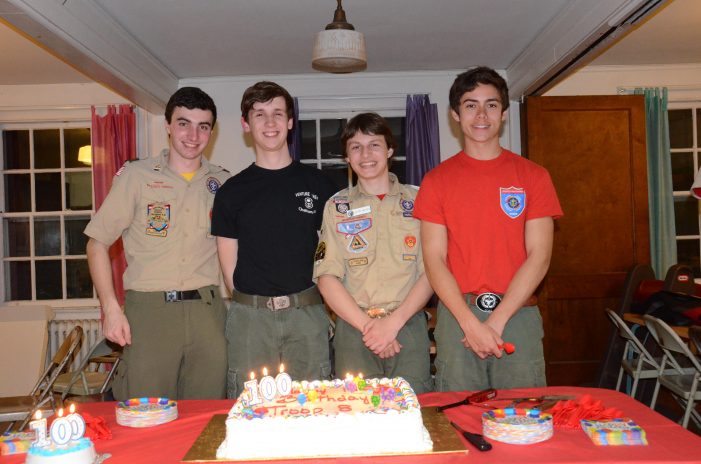 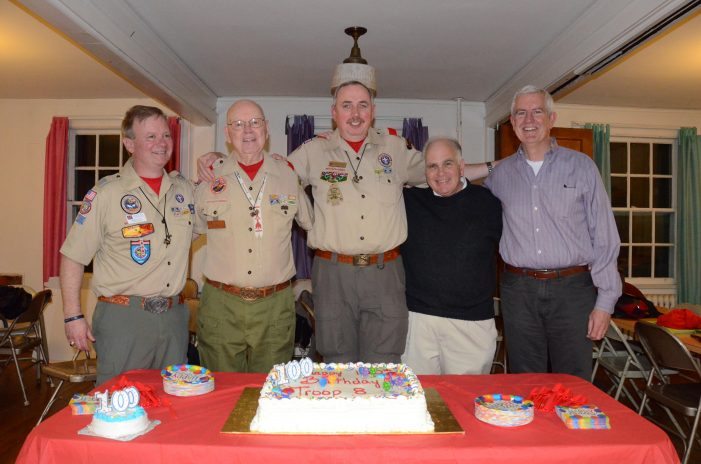 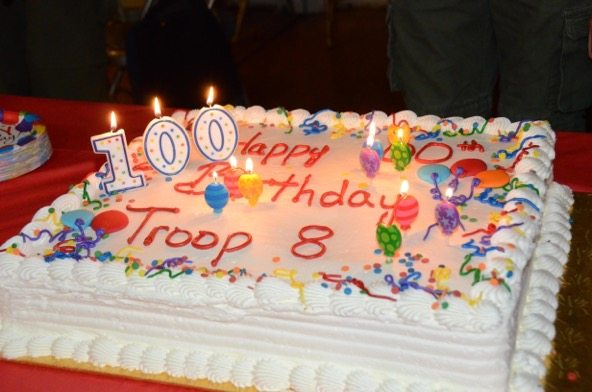 Based out of Chatham is one of the oldest Boy Scout troops in NJ.

The Boy Scouts of America was founded on Feb. 8, 1910. It was only six years later that Troop 8 began to hold meetings in conjunction with the Ogden Memorial Presbyterian Church. It is a partnership that has lasted 100 years and is thriving today.

Tony Britt is a scoutmaster with Troop 8 whose son, Erik is currently working on his Eagle Scout project. Britt has been with the troop for five years, since his son was promoted from Cub Scouts. This year, however, he has been using his skills from his career in marketing to draw attention to this historic year for Troop 8.

There is a four pronged approach to this celebration, which started with a birthday party back in April. The celebration was complete with a chorus of “Happy Birthday,” cake and candles to commemorate the day of the troops beginning.

Then in May, the troop held a Gala celebration at the Fairmont Country Club, with about 190 people in attendance. A dozen or so alumni were present, some of whom received the honor of “Scout Legend.” These were people who have been integral in continuing the legacy of Troop 8 and who had left a lasting impact on the alumni.

John McGrath was one such “Legend,” who was pointed out specifically for preserving Troop 8 for future generations of boys, by working to return the troop to its foundational principles.

One of the principles of scouting that was instituted by Robert Stephenson Smyth Baden-Powell, who wrote the book “Scouting for Boys” and who is credited with starting the worldwide phenomenon of boy scouts, is having the boys take leadership in their troop and be a vital part of the planning and decision making process.

When McGraff was a scoutmaster for Troop 8 back in the 80’s, it had gotten away from the idea of boy led scouting. The level of interest in scouting was waning as were the troop’s numbers. There were only eight to 10 boys.

“He saved the troop,” said Britt “by reinstituting boy leadership and reinstating the senior patrol council once a month to map out objectives.”

On the subject of boy lead scouting Britt is firm.

“We’ve had both sides of it and the boy lead aspect has all these great dividends,” he says.

Commenting on the growth he has seen in his own son after he was elected as senior patrol leader, “The transformation was incredible. I’m looking around thinking, ‘Is this my son?’” Britt was so impressed by his son’s growth as a leader as he stepped up in a scout leadership position; his public speaking skills, decision making skills, and his confidence. Being given the opportunity to make decisions for the troop and plan troop events as well as manage time and resources helps the scouts develop self-management skills that are vital for success in life.

Baden-Powell first saw the need to teach boys basic survival and scouting skills while serving in the English army.

According to the Boy Scouts of America web site, “While stationed in India, he discovered that his men did not know basic first aid or the elementary means of survival in the outdoors. Baden-Powell realized he needed to teach his men many frontier skills, so he wrote a small handbook called Aids to Scouting, which emphasized resourcefulness, adaptability, and the qualities of leadership that frontier conditions demanded.”

Those involved in scouting today can see the same deficits in the 21st century boys, not only in frontier conditions, but in life skills.

“It is modernizing in many ways,” says Britt “which is tremendous. It is not 1916 anymore.” Still he is quick to point out that the core aspects of scouting still apply and sticking to the principles of boy leadership serves the troop and the boys themselves well.

“We are very active in the community, and have some outdoor related activity every month. The times have changed but the volunteer efforts in the community have remained the same.”

In preparation for the recent Gala, Britt went through old newspaper issues looking for mentions of Troop 8. A lot of the efforts to help in the community are very similar to things the troop was doing to improve the community back in the 1920’s till the present day.

One current service project is for the boys to paint all 370 fire hydrants in town. Having the boys paint them frees up the highly skilled workers with the Department of Public Works, to do things better suited for their skills set. That is something boy scouts from any era might have participated in.

There are two more centennial year events planned for this year. One is the 4th of July parade in which another “Scout Legend,” Dick Ligertwood, will be marching as the parade’s Grand Marshall. At 85 years of age he has spent more than 70 years as part of scouting in Chatham. At the recent Gala, many alumni and scouts stood up to commend him for having made such a huge difference in their lives.

The last event planned for the centennial celebration is a scout and alumni scouting expedition being held in September. Both current scouts and alumni will be attending to celebrate Troop 8 and to take part in a variety of traditional scouting activities.

Britt is hoping that many Troop 8 alumni will join the scouts for both the July 4th and September events. Any past troop 8 scouts can contact Britt at Troop8100yrs@gmail.com

Unfortunately the troop does not have a current database of past members, so reaching out to him is the best way to receive updates and find out more about how to be involved in this salute to Troop 8’s 100 years of scouting.