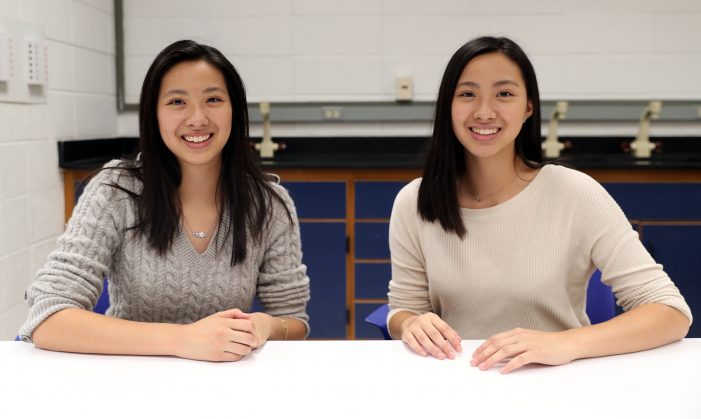 To look at Jacqueline and Josephine Wu, twin sisters at Randolph High School, you would think they are typical high school seniors. You’d be right, but they have one unusual accomplishment for anyone their age.

The study evaluated the efficacy of patient immobilization by analyzing spinal patients’ movements during their treatments.

“The sisters were inspired to do the research for different reasons but found commonality in their curiosity,” said Matthew Pfouts, the high school’s director of communication. “Jacqueline has ambitions to pursue a career pathway in this line of research.”

“I want to explore the medical field and see what kinds of research I could do and what I could ultimately explore,” said Jacqueline.

“Josephine on the other hand is genuinely curious,” said Pfouts. “She thought that pursuing this research could be an area where she could expand and grow personally.”

Jacqueline and Josephine started their research in the summer of 2017 at the Memorial Sloan Kettering Cancer Center at New York, under the Laughlin Medical Physics Internship. Together, they worked with physicists and physicians on a research project called: “Intrafractional target motion during spinal stereotactic body radiation therapy.”

The twins analyzed thousands of patient records for success rates of immobilization techniques. Their research, understandably, was challenging. “Analyzing the data from more than 1,000 patients was tedious,” said Josephine. “Sometimes I wouldn’t pay attention and later would realize we had made a mistake. We always double-checked the research we collected making it a lot more accurate with the two of us doing it. We would have to sift back to find the error, correct it, and move on.”

“While research is fun, not all research is fun,” said Jacqueline. “You must get through the tough things because the result is worth it. Seeing the outcome of our research made it all worthwhile.”

They presented their results at the IEEE Engineering in Medicine and Biology Society’s International Conference in Las Vegas on March 4-7, 2018. Later, they submitted the manuscript to the PRO journal for consideration. After two rounds of peer-review, by physicists and physicians, the paper was accepted for publication.

The two girls learned many things. “Josephine learned how to work closely with others and how to allocate tasks to ensure their research stayed on schedule,” said Pfouts.

“In addition to being published researchers, both are incredibly accomplished at Randolph High School,” said Pfouts. “They are heavily involved in the district’s music program. They are both affiliated with several honors groups including English, math, science, and social studies honor societies.”

Jacqueline has a passion for mathematics and science. She loves competing on Science Olympiad team as well as the district’s Math League. Josephine enjoys giving back as she frequently tutors students at other schools.

Both credit their education at Randolph for their success and are inspired by their teachers. “The entire staff is so helpful, and you can talk to them outside of class at any time,” Josephine said. “Everyone is so supportive, and I just love all of my teachers.”

Jacqueline cited Mrs. Kessell, an English teacher, and Mr. Douglas, a math teacher, for helping her to pursue her goals. “They maintain a high level of both fun and rigor. It’s great to be able to go to class where you can be challenged and supported. They have inspired me to pursue my dreams which includes majoring in multiple studies.”

Jacqueline intends to enroll in pre-med with objectives to pursue molecular biology, biochemistry, and English. She is not afraid to double major as she has many passions she would like to pursue.

Josephine would like to pursue a degree in history, east Asian studies or medieval studies. She believes she will one day end up in academia and would love to conduct historical research.

Both cited their parents as being key contributors to their success and for instilling the right values in them. “They inspire us to work hard and never give up on our goals,” Josephine said.