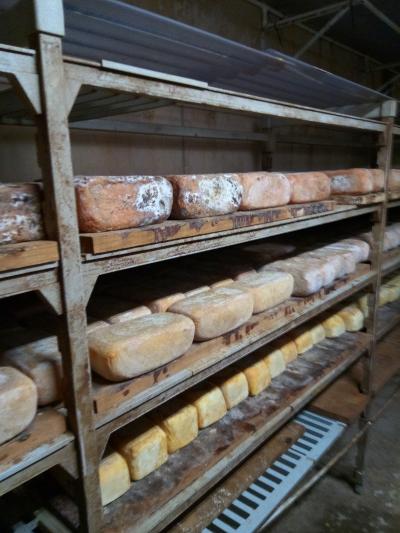 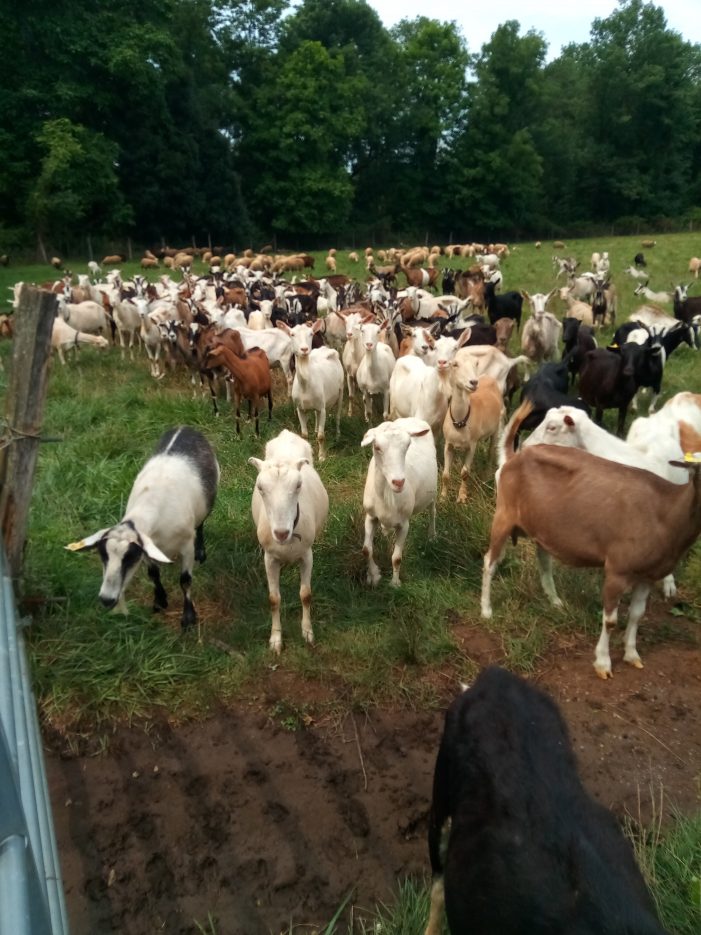 In order to age his cheese, Eran Wajswol – founder and owner of Valley Shepherd Creamery with his wife, Debra – dynamited part of the hill to create a cheese Aging Cave about a mile away from his Sheep Shoppe.

It’s a nice walk on a nice day. But on a nearly 90-degree recent Friday, cheese maker Aldo Cammalleri opts to take a visitor by SUV. As you drive slowly up the road, many large, empty fields are passed. They are not for expansion, but for rotational grazing for the goats and sheep, which number about 600 at the 122-acre farm.

“What that (rotational grazing) means is we’ll use the same field for multiple days and rotate them around,” he explains, “so they eat the grass evenly in the fields, and that also lowers the parasite load.”

On a lower field, great numbers of goats and sheep approach the fence as the vehicle passes. They know the time is coming to get milked.

“There never is a dull moment,” says Cammalleri. “Were milking, were processing, were selling.”

“It’s never boring and there’s always something different to do,” Schoenlank says.

Wajswol and Van Sickle met and studied engineering at Stevens Institute of Technology in Hoboken, opted out of that field, and instead now run a major operation that produces primarily sheep and goat cheeses. Originally at his home in Califon, Wasjwol had started with sheep only in the 1990s. When he wanted to increase production, he purchased the Long Valley land and built a barn, buildings, and all.

“I think it’s over 20 years (old) now,” Schoenlank says. “Around 2003. We do cheese out of all three, sheep, goat, and cow. It originally started with sheep, so we had the sheep and goats here, and we did work with another farm for the cow milk.” She further explains the timeline. “The goal initially was sheep cheese.  Sheep’s milk makes the best cheese due to the high fat content.  Goats were added later.  Although the fat content of goat’s milk is one of the lowest, it was discovered all the great goat cheeses we were able to produce such as our chevre (fresh goat cheese), Verigoat and Gotogetagoat, two of our very popular cave aged goat cheeses.”

Cammalleri started at Valley Shepherd Creamery in 2013 at age 16. He’s 24 now. How busy his day is depends on what he’s making. “Some days, like on a day we’re making cheddar, that’s one of the longest days – we get started at 4 in the morning. So that’s pumping that whole vat fill of milk, 3,000 pounds, and that day usually finishes up around 6:00 at night.”

“As far as New Jersey goes,” says Cammalleri, “we’re the only one (milking sheep and goat for cheese).”

The general steps for cheesemaking are as follows. The animals in the fields consume their feed, and they then produce milk in the milking parlor (a 2-hour at most process) and every two days the tanks are emptied out, and then the milk is heated, bacteria is added, and either raw or pasteurized milk is made. If pasteurized, the heat is turned up, killing bacteria in it, and inoculating it with good bacteria. For raw cheese, the milk is heated to incubation temperature, adding bacteria into it, and that bacteria plus the natural microflora in the milk, is what give cheese the natural flavors.

Valley Shepheard does both retail and wholesale business. There’s a regular staff of around 20 people.

Schoenlank  says, “I know he (Wajswol) saw this as the perfect piece of land. It’s fertile ground, nice pastured land, and the hillside – the (cheese) cave is built right into the hillside. So, I think that’s what made this the ideal area for that purpose.”

“My bed is over there,” says Cammalleri, while looking into the cheese making room, a pun to the long hours he often works at a job he enjoys .

“This is where we make everything,” says Schoenlank.

The one word to describe it? “Hectic,” says Cammalleri. “Most days, just because there are things that are happening all at the same time. So usually I’ll come in the morning, start pumping milk, the interns will come in and take cheese up to the cave, or sometimes if they’re new I’ll have to multitask pumping milk, show them what they have to do for the day, and things like that. On any given day, we can run anywhere from 1 to 4 cheeses.”

Valley Shepherd Creamery gives back to the Black River area by offering school tours, tours for girl scouts and boy scouts, agriculture and 4H groups. It also takes part in farmers markets in the New York City, but also in Montclair, Hoboken, and Ramsey, and soon Duke Farms in Hillsborough. Locals visit during the week for yogurt and cheeses, and weekends are busier, when out-of-staters visit. Per Schoenlank, “Yogurt production and fresh goat cheese are big things on the horizon and finalizing production and  going wholesale with both moving forward. That is really on the horizon. The focus is on our glass jar sheep’s milk yogurt in several different flavors.”

The cheese Aging Cave is between 50 – 55 degrees. Your voice echoes when you enter. The main room of the four is in the rear of the cave. Different varieties of aged cheese sit on shelves; some big and round, some tiny and rectangular. The smell of the cheese if fragrant.

The cheeses are taken out of their molds and arrive to the cave with not much flavor. Then the magic happens. They are to a brine for various periods of time, anywhere from 36 hours to 5 days, then are placed on a drying rack to dry from 1 to 3 days, and then moved to a proper shelf to age. The oldest cheeses per name are placed on lower shelves, youngest higher up. Wajswol names the cheeses, and he often uses the names of local places. Some cheeses in the room are aged  3- 5 months, some longer. “Tewksbury” ages for  8+ months, “Valley Thunder”, a sharp cheddar, takes a year to age, and ‘Somerset”, a popular alpine style cheese, ages for 18 months.

“I’ve been here a little over two years,” says Schoenlank, “and he’s (Cammalleri) has been here longer and is still learning every day.”

“There is always more to learn,” says Cammalleri, “more and more as far as cheese making goes, animal handling, and even selling the cheese. There is always something else to learn.”

Valley Shepherd Creamery is located at 50 Fairmount Road in Long Valley. To learn more – and there is much more to learn – visit www.valleyshepherd.com, or call (908) 876-3200.