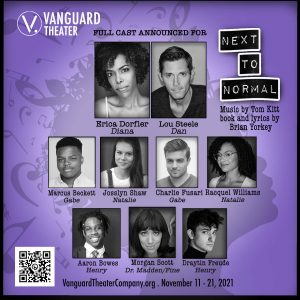 Vanguard Theater announces the cast and creative team for its Mainstage production of the Pulitzer Prize–winning musical, Next to Normal.

Erica Dorfler stars as Diana. Erica made her Broadway debut in the 2010 Tony Award‐winning hit Memphis, followed by the Tony, Grammy and Olivier Award‐winning The Book of Mormon, and the original Broadway cast of Natasha, Pierre and the Great Comet of 1812, nominated for 12 Tony Awards including Best Musical. Playing Dan is Lou Steele (Regional credits include Diner, Violet, Songs for a New World ) as Dan. They will be joined by Josslyn Shawand Racquel Williams, alternating as Natalie, Marcus Beckett and Charles Fusari, alternating as Gabe, Aaron Bowes and Draytin Freude alternating as Henry, and Morgan Scott as Dr. Madden/Dr. Fine.

Janeece Freeman Clark, director, states: “We are thrilled about the cast we have assembled for Next to Normal! Our experimental approach to this show (having the same show – with shifting actors) will be part of an exciting process to explore how the narrative shifts with players of differing complexions.”

In addition to the 2010 Pulitzer Prize for Drama, this unflinching look at a suburban family struggling with the effects of mental illness with book and lyrics by Brian Yorkey and music by Tom Kitt won three Tony Awards, including Best Original Score. The musical also garnered three Helen Hayes Awards, including Outstanding Production, during its pre-Broadway run at D.C.’s Arena Stage.