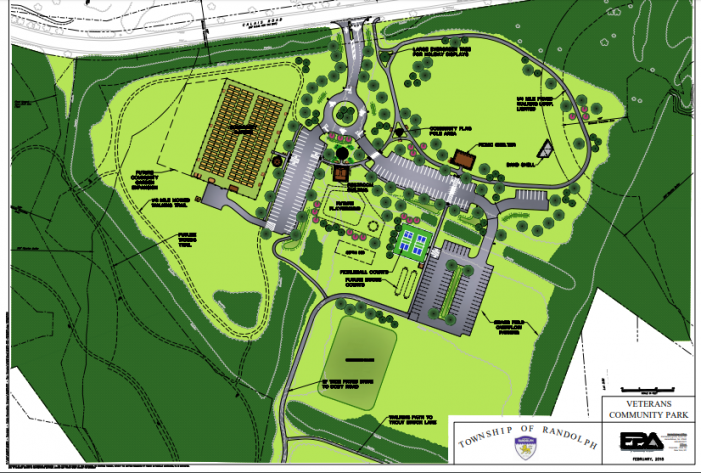 Randolph Township has four major parks: Freedom Park, Hedden Park, Randolph Lake/Park and Brundage Park where residents can enjoy watching or participating in a game of baseball, soccer, tennis, swim, see stage productions created by young people and performed by Munchkins (in Brundage Park Playhouse) and where children can have fun on swings and other kiddie rides. These are all parks designed for the most part for active sports.

“The idea for building a Veterans Park was incorporated into the development of the Parks and Recreation Master Plan in 2016,” said Russ Newman, Director of Parks, Recreation and Community Services.

“After it was proposed we went through a design phase, and then it had to be put out for bids. Then the bid had to be awarded. So we didn’t actually break ground until September 2018.”

Rochelle Contracting, of Landing, New Jersey assume responsibility for the project’s completion. The new park will feature an amphitheater, a band shell for public celebrations and concerts, quarter-mile paved track, a lighted walkway loop, a community garden, a pavilion will be available for rental picnic parties and other celebrations. Pickle ball courts, paved and natural trails, rest room facilities, and multiple open areas for passive recreation and public events will round out the park’s profile.

The project was funded from the Park and Recreation/Open Space Trust and no additional municipal funding will be required to complete the project. The construction of the park was originally expected to be completed in the fall of 2019 but pushed into the spring of 2020 and now to the summer due to the original contract as default.

“The park was funded for about $2.5 million, and we are on target with that,” said Newman

“The concept of the park is to have an area where we can do public gatherings celebrations,” said Newman. “Our other parks are mostly centered around athletic facilities so this is more of passive space where people can just go and enjoy the quiet as well as having a place where we can have public celebrations.”

“About a year ago we asked the residents for input into what to name the park,. and Veterans’ Community Park is what came out of that request.

The park will be located on Calais Road, in Randolph, about a half mile west from the community center.”