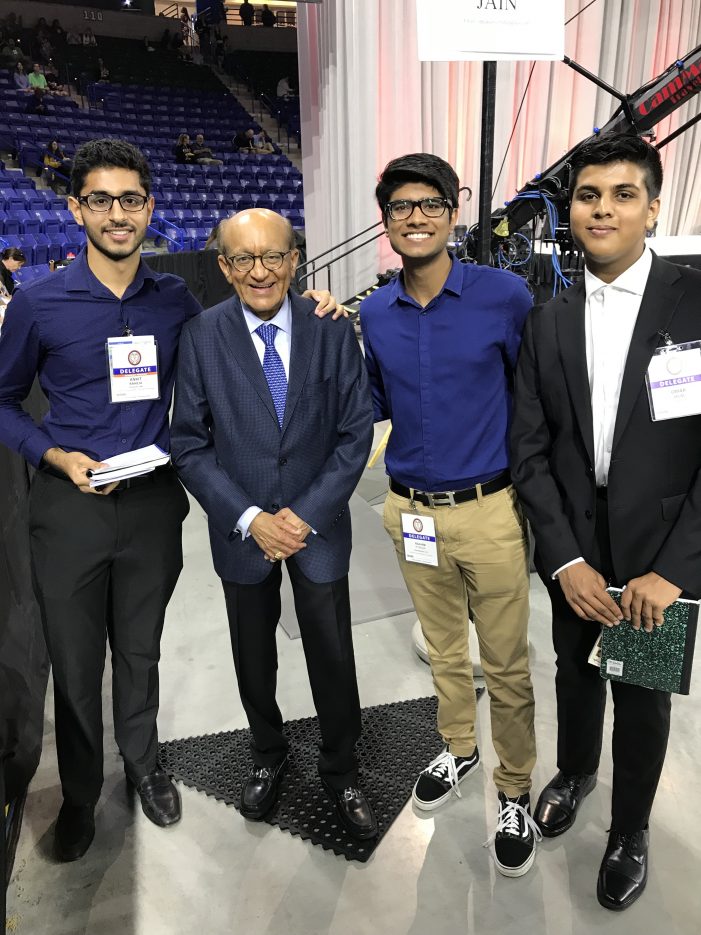 Raahim Iftikhar, in the navy blue shirt with Khakis, standing next to Dr. Rakesh who is on the left of him. And the two other people are some other students he met at the Congress

A senior at West Morris Central High School was recently recognized for his completion of a prestigious medical conference for students in the summer.

In October, Raahim Iftikhar, 17, of Long Valley, a senior at West Morris Central High School, was the recipient of the Award of Excellence for his completion of the National Academies Congress of Future Medical Leaders in Boston. He attended the conference in June.

“There were a lot of emotions,” Iftikhar he said regarding winning the award. “I was just kind of baffled. I was ecstatic when I received the award.”

Iftikhar, who has been passionate about the field of medicine his entire life, said the conference was worth going to and he is proud he was recognized.

“I’ve always been interested in science and math,” he said. “The congress of future medical leaders allowed me to know that I do want to pursue the field in medicine.”

The theme of the Congress was “Greatness Awaits,” and students were mentored by renowned doctors. There were Nobel Prize Laureates, top medical school deans, leaders in medical research and cutting-edge technology and leaders from private industry.

The doctors Mario Capecchi, a biophysicist and a professor of human genetics at the University Of Utah School of Medicine, J. Craig Venter, who is regarded as one of the leading scientists of the 21st century for his contributions to genomic research, Sir Richard Roberts, an English biochemist and a Nobel Laureate and Rakesh Jain, an oncologist and professor at Harvard University. Iftikhar enjoyed meeting and picking the brain of Jain.

Furthermore, students had the chance to view a live knee replacement and learned about state-of-the-art diagnostic tools.

Iftikhar has done an internship at Stevens Institute of Technology in Hoboken, worked at Cura Inc, a rehabilitation center in Secaucus and volunteers at Saint Clare’s Dover Hospital.

He said the most important thing he learned at the conference is “whatever you want to do you can achieve it, no matter your age.”

His two uncles, Imran and Rizwan are doctors in Pakistan and Saudi Arabia, and he plans to follow in their footsteps and one day join the medical field. While he isn’t sure if he will go abroad, he is keeping his options open.

Looking to the future, he is applying to a few colleges with a goal of studying biology and or biomedical engineering and he hopes to eventually become a pediatrician.

“I think I can have an impact in the field of medicine as well,” he said. “They’ve (his uncles) helped me and guided me.”