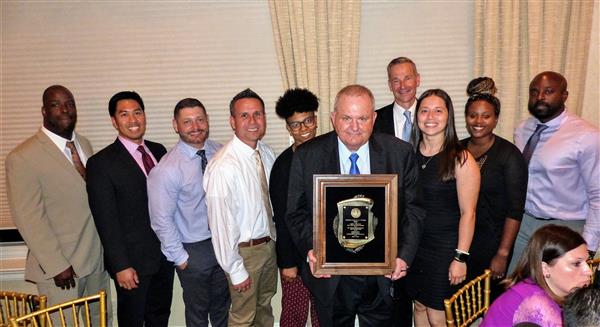 Photo: Courtesy of WO Public Schools

Ron Bligh, Athletic Director at West Orange High School for the past ten years, has recently been named Athletic Director of the Year by the Super Essex Conference (SEC) and the Essex County Athletic Directors Association. He was honored with the prestigious award at the 42nd Annual Scholar Athlete Awards Ceremony, which was held at Mayfair Farms in West Orange.  There, he was surrounded by friends, family, and even students. Bligh said, “I got to share it with my family and closest friends, and what made it more special, was that my sister and brother presented it to me.” They are both Athletic Directors from Essex County. He was proud to say, “I am a member of a fine group of people.”

Bligh has had a love of sports from the beginning. He’s had a 40 year involvement in sports communities. Over his career, he had transitioned from player, to coach, to principal, and then to Athletic Director.  He fell in love with sports at an early age. It began as a young athlete when he recalled, “My dad was my first coach, and in my home, it was always a family affair.” His family gave him a strong work ethic. They also taught him to be generous, to care, and to be committed. At an early age, he learned that care and commitment to kids was the most important thing.  He enjoyed and took part in wrestling, football, baseball, and track.

He became a physical education teacher and coach at Bergenfield High School and Irvington High School. He proudly acknowledged, “I have always looked up to my coaches.  Good coaches are good teachers. I’ve tried to make every position I’ve held a team one.”

Later on in his career, he became the head of the Physical Education/Health Department at Irvington High School and then the principal of Union Ave. Middle School in the same town. “I have always thrived on the competition and made great friends along the way,” Bligh said.

Over the years, Bligh has received many awards, and his accomplishments and contributions have been acknowledged. Moreover, he has served on many important committees and commissions.  In his current position as Athletic Director of WOHS, he has done great things for the girls program, especially. In 2018, the girls’ program was named the number one athletic program in Essex County (a first SEC Ronald SanFilipo Cup for the program).

When asked what made his latest award so special, Ron Bligh replied, “Get a job you love, and you will never work a day in your life.  Teaching and coaching allow you to make a difference in the life of a child, and Oh, what a rewarding feeling.” He has been inspired by his career in education and athletics, and he wants people to know that most of all.

He shared the night with sixty-six scholarly students who were also recognized for their great contributions to athletics.  The night was applauded and celebrated by parents, coaches, teachers, and administrators who came to honor the athletes, along with Ron Bligh.