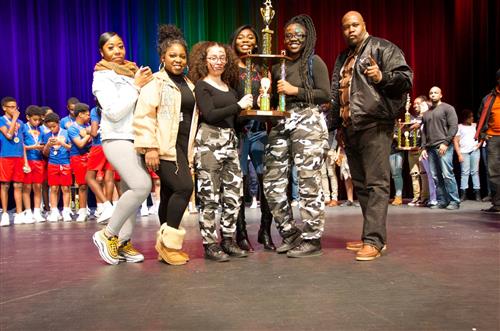 Stepping is a form of percussive dance in which the body acts as the instrument through stomping, speaking, clapping and tapping. Step teams perform group dance in formation, similar to drill teams. Step teams use elements of breakdancing, gymnastics, tap and African dance to choreograph highly energetic and athletically demanding pieces.

The boys step team won first place at Nationals back in 2012 and has placed in the top three in the nation for the past eight years. Currently, Ab-Salute is ranked number one in NJ and Nu Theta Omega is ranked number two by Youth Step USA. The West Orange teams compete against one another in the Youth Step circuit, but at the National Competition coming up on Memorial Day weekend at Newark´s Symphony Hall, the teams will compete in separate divisions. Youth Step organizes this event where the best teams from across the US will compete for over $23,000 in championship prizes.

The spring is the busy time for the West Orange step teams, with many Saturday competitions organized between various high schools in the tri-state area.

West Orange High School first started having a Step Team in 2000 when the current boy´s coach, William Farley joined the school’s faculty. At that time there was a girl´s drill team but no boy´s team. The school where Farley had taught previously had a successful boy´s step team, and Farley offered to start one in West Orange. That was 19 years ago and the program has grown to be the consistent standard of excellence that it is today.

At the time that Farley was starting West Orange´s Step program, The New Jersey State Step Association, NJSSA, was also starting up, organizing regular competitions between step teams throughout NJ. This helped provide valuable experience for the West Orange teams and raise awareness of stepping throughout NJ.

Over the past two years however, NJSSA has not been organizing meets in the state. As a result of this change, the first competition that West Orange´s teams participated in this academic year was the Regionals on Feb 16th.

Ab-Salute and Nu Theta Omega performed exceptionally well at the regional competition, taking 1st and 2nd place respectively. “The Boys and Girls put on two great shows. That was our first competition of the year, so we are pleasantly surprised, and of course excited for Nationals,” said Farley in a recent press release.

Each dance is about ten minutes in length and often tells a story or is focused on a particular theme. When asked if he choreographed the pieces for the competitions, Farley was enthusiastic, “That was the great thing for me. I thought I was going to have to do that…but the kids are talented enough to do that themselves.”

Farley is adamant about offering the team members leadership opportunity. Each year there are two captains and two co-captains chosen from the team´s upperclassmen who help organize the team and lead in the routines. There are about 23 boys on Ab-Salute currently and Nu Theta Omega has about 25-30 members. The teams travel to events together, sometimes compete against each other and in the past have even tied for first place at the NJSSA Championships.

Both teams are excited to be heading to Nationals and look forward to continuing West Orange´s legacy of excellence.