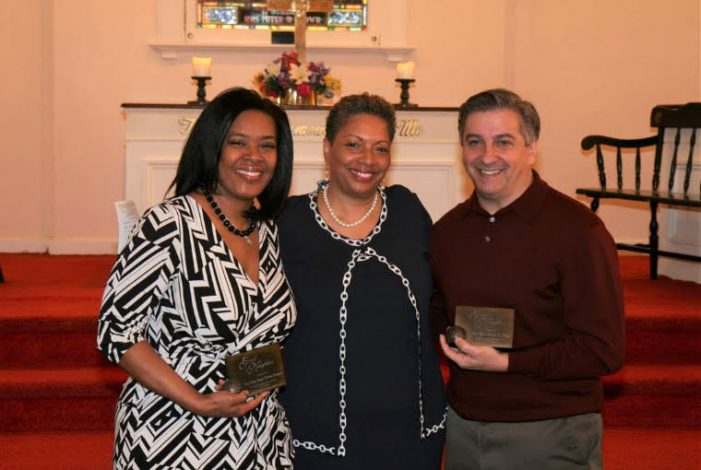 Being a good neighbor. There are many different components to being one. Caring, empathy, compassion, and going out of the way for someone else are just some of them. Being a good neighbor also encompasses an awareness and recognition and inclusion of community diversity. Realizing that all people are unique, interesting and have something valuable to say and do that others can relate to.

It takes tolerance and an open mind and a willingness to care and learn. Such is the spirit of the Good Neighbor Award presented by the Federated Church of Livingston.

On March 24th, taking place at the church in Livingston during a special service, the church presented this award to West Orange Mayor Robert Parisi and the West Orange Human Relations Commission.

United against hate and celebrating diversity, and the things that make everyone unique and special, both Parisi and the Human Relations commission are quite honored and humbled about receiving the award, letting their good works speak for themselves.

“Kindness matters,” Parisi says abashedly, “This is all about just being kind. It was so nice of the church to do that.”

Established in 1992, the West Orange Human Relations Commission have been developing and implementing programs and initiatives that encourage a positive and constructive dialogue within the township regarding diversity and diversity related issues.

Parisi, who has been mayor since 2010, jokes that he “fell into the role of mayor,” in actuality he served on the township council for 12 years, before becoming mayor. A lifelong resident of West Orange, he has been helping and giving back for as long as he can remember. He enjoys going out into the community, making a difference wherever he can. From such as going out into the community to read to the children, something he likes to do several times a year.

“This is all about people from different walks of life working together for a common shared goal,” he shares. “We pride ourselves in being a diverse community in West Orange.”  Parisi has worked several times in the past with the West Orange Human Relations Commission on various other projects, but this was the first year he had worked with the Livingston Federated Church, and he hopes to do more with them in the future.

Winning the award for their inclusive efforts in the West Orange Community, Parisi asserts that he and the West Orange Human Relations Commission was recognized, not just for their good works, but also with the work they did during their Martin Luther King Day celebration.

“We celebrated the theme of service, we not only celebrated Martin Luther King Day and the man that he was, we honored West Orange residents who were outstanding service members as well.” Parisi explains.

Dancers, speakers, poetry, music, patriotism, and so much more. The day was filled with excitement for folks of all ages and walks of life. One of the most exciting events was the appearance of social media’s “Discovery Twins,” Alexis and Ava McClure.

Out of the mouths of babes, when asked what they knew about Dr. Martin Luther King, the twins remarked that Dr King believed in “being nice to all people and that all people were created equal.”

“There’s three things people can control,” the commission asserts. “Our thoughts, our speech, our behavior. If we can control this, we can change the world.”

“I loved growing up in West Orange,” Parisi tells. “Living here it’s wonderfully diverse and the town itself has such a good vibe of neighborliness. It’s what we love about the community. It’s been my pleasure to serve it.”

Ever humble regarding the award, West Orange is looking forward to doing even more for the town. He is eagerly anticipating the upcoming street fair held on the first Saturday in June and the Memorial Day Ceremony and Flag Raising ceremonies where people will celebrate their country of origin.

On any given day the mayor and the West Orange Human Relations Commission adheres to the motto, listen and turn passion inward to do something valuable for others. For these folks, being awarded the Good Neighbor award is not about them, it’s about giving hope and possibility to all.

Parisi sums it up with these words, “The Good Neighbor Award is an example of what positive and good is out there. It’s a way to show what we can be like even in this modern world.”