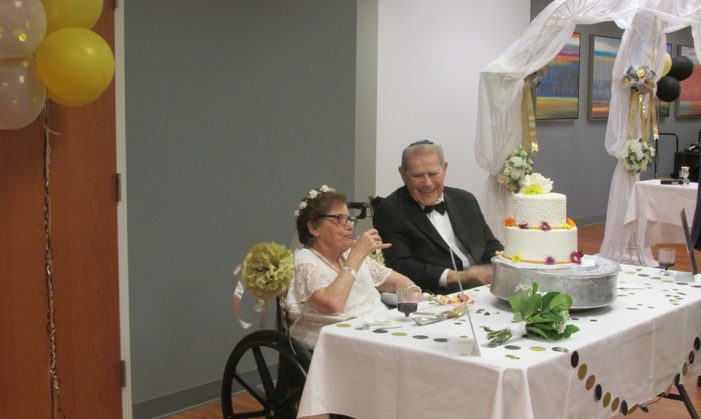 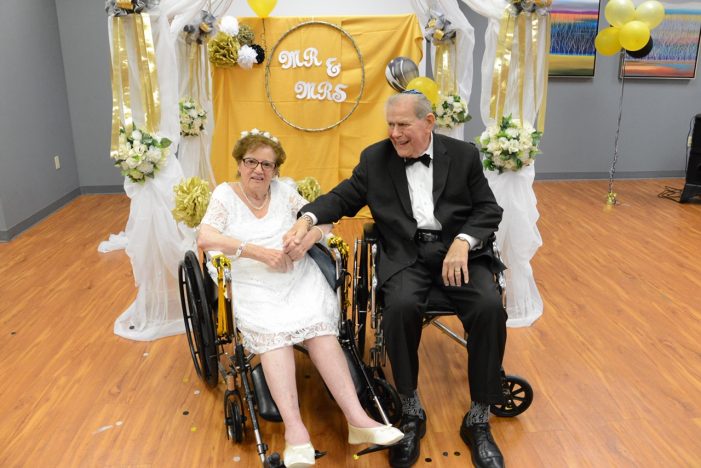 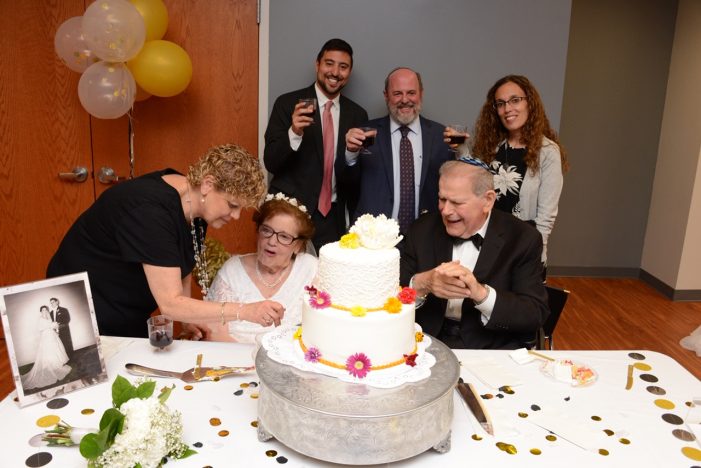 Photo: Eleanor and Daniel Clarich at their vow renewal ceremony at Daughters of Israel.

Eleanor and Daniel Clarich, both residents at Daughters of Israel (DOI) in West Orange, had a special reason to celebrate this summer. The couple renewed their wedding vows in a festive ceremony put together by DOI staff on June 27, to mark their 65th wedding anniversary. The ceremony, which took place at the DOI facility, was an elaborate celebration of a lifetime spent together. 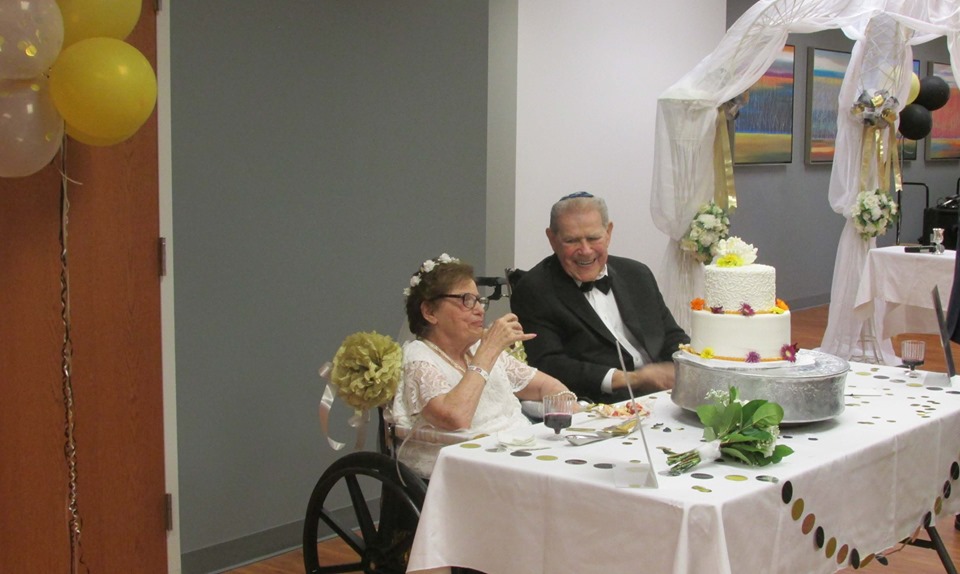 The Clarich’s renewed their vows with a chuppah, dessert reception, wedding cake and other festivities. The celebration was officiated by Senior Rabbi Geoffrey Spector and Assistant Rabbi Simeon Cohen from Temple Beth Shalom in Livingston, along with Cantor Sharon Knoller. The guests, who consisted of DOI residents and the Clarich’s family, friends and fellow temple members, received personalized chocolate wedding favors.

Patti Lowy, the Clarich’s daughter, said that her parents have known each other since they were children. Eleanor was born on the Lower East Side of New York City and in her childhood moved to Brooklyn, where Daniel had also grown up. According to Lowy, the two always socialized via a circle of neighborhood children, often hanging out in Eleanor’s grandparents’ house.

“My father says they met at a dance after Yom Kippur, and they went out for ice cream – although his chronology sometimes changes,” Lowy mused.

The actual 65th anniversary for the couple will be in December, but they held the celebration earlier as DOI marks such events during the summer. According to Lowy, the couple, who has been living together at DOI since April, was approached by the facility’s staff with the suggestion for the ceremony. DOI had already been in touch with the clergy of Temple Beth Shalom, where the Clarich’s had been members for nearly 50 years.

“The ceremony was beautiful, and aside from the residents, many family members and friends from Beth Shalom attended,” Lowy said. “That was very special for my parents.”

DOI is a multi-faceted nursing facility offering modern and comprehensive services including long-term care, sub-acute rehabilitation, memory care, hospice/palliative care and respite stays, according to its website. The facility is staffed by skilled and dedicated professionals who deliver the highest quality of care for some 300 residents; this includes varied levels of healthcare as well as a full array of recreational and social programming.

Lowy was full of praise for the way DOI has been taking care of her parents.

“They have been absolutely incredible – it’s a wonderful, cheerful place with friendly staff,” she said. “My hat goes off 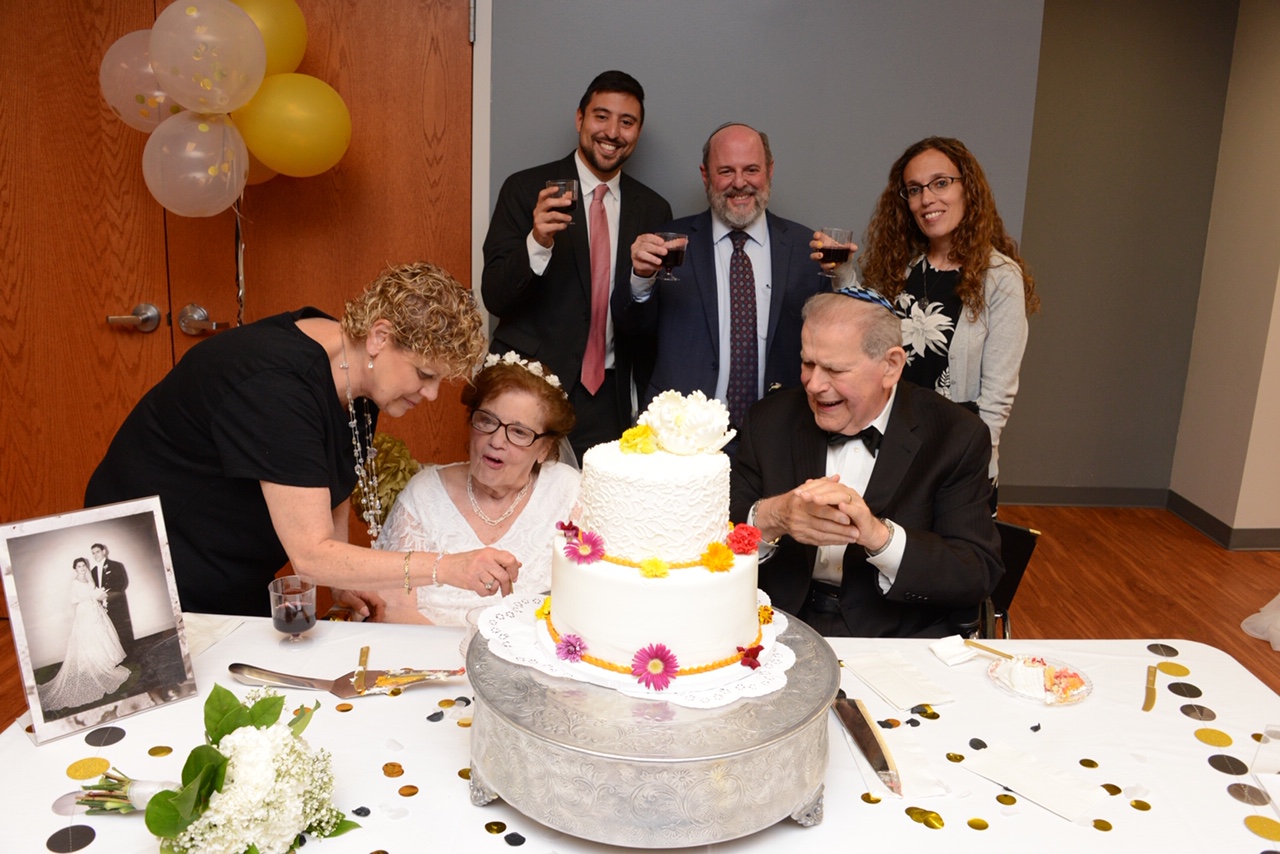 to them, not just for the vow renewal ceremony, but the way they take care of their residents.”

As part of the ceremony, two staff members used photos provided by Lowy and her family to compile a memory book for the Clarich’s. The “beautiful” album contains all of the couple’s and their family’s essential milestones, according to Lowy.

Eleanor and Daniel have two children, Patti and Jonathan, four grandchildren and one great-grandchild – who Lowy says is “the light of their life.” As the Temple Beth Shalom clergy that officiated the ceremony has known the couple for many years, the event was especially tinged with emotion.

“They absolutely enjoyed it,” Lowy said of her parents. “It was very emotional for them.”