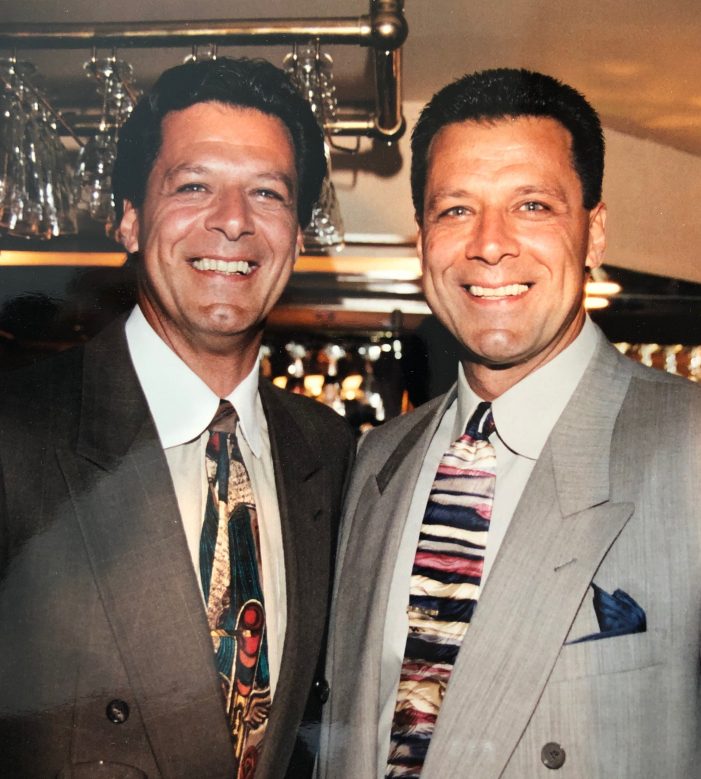 Twin brothers Nick and Pat Galante are two such workers. As educators in West Orange, they have 80 plus years of service between them; designating a deep devotion to career. To them, educating young minds in West Orange was more than a job, paycheck, or even just going to work.

Giving back to the community and paying it forward, they served as educators, student and teacher advocates, and are proud alumni of the West Orange High School class of 1965.

So much more than a party or even honoring these two educators, the celebration held a heartwarming surprise. The Galante Scholarship, named after the two, started just this year, to give approximately 50 West Orange High School Students based on academic achievement, financial need, and community involvement, the chance to further their education.

Jim Quinn of the West Orange Scholarship Fund excitedly discloses that the idea to honor the Galante Brothers for their contribution to West Orange Schools was a “no brainer for everyone.”

“They were so gracious when I told them about what we were planning,” Quinn relates. “They are both terrific guys.”

Inspiring, educating and instructing youth, that’s the motto of West Orange Schools, and the Galante brothers wouldn’t have it any other way.

Both Nick and Pat Galante speak about their moving from Newark, about growing up in West Orange, about attending various West Orange schools, including Redwood Elementary, Lincoln Jr. High, and Mountain High School. Both are animated when they talk about how they both went to Seton Hall University, getting their degrees in Elementary Education. They enjoy talking about sports and coaching, but it is the subject of family that they enjoy discussing most.

Warm and gregarious, for both brothers, Nick and Pat Galante, family is everything. In speaking to both of them, their enthusiasm and devotion to family shines with every word.

They speak about their parents, and how they raised four sons, and how all of them went into education of some kind.

“My father was our biggest fan,” Nick Galante shares. “To both my parents, education wasn’t just a thing, it was the thing. Both of them were way ahead of their time. They encouraged us all in so many ways. They took an interest in what we were doing, talked to us, helped us.  When it came to our wanting to go into education to become teachers, his philosophy was, “Try it, you’ll know if you like it after a couple of years. You’ll know it by wanting to get up in the morning. If you do what you love, that makes all the difference.”

“They were so supportive, and selfless, they really made a commitment to us all.”

With such amazing role models as their parents, Nick and Pat Galante sought out to give children just some of what they were given. The brothers not only loved what they did, they sought to make a difference in the lives of their students, teachers, parents and co-workers. In short, they sought to give back to West Orange.

The Galante’s shared philosophy was an amazing one of treat the students like they are family.

Their approach to teaching was an inclusive one. Realizing that the old adage that it takes a village to raise a child was 100% accurate, the Galante brothers actively sought to bring parents, co-workers, and administration into the lives of students.

An example of this was when, in 1984, Nick Galante helped implement the Madeline Hunter Method, a model of teaching that benefited students everywhere, not just in West Orange.  “It concentrated on things such as studying teacher behavior, their lessons, recognizing the efforts of students, making successful programs, what they should say, how to say it,” he explains.

For Pat Galante, he asserts, “I wanted to give the students a reason to come to school more, to give them a positive and personal experience.”

He had the opportunity to test this out when he was the Dean of Students, in charge of discipline. He gave the students both guidelines and boundaries as well as inspiration.

His approach was golden. Through guidelines and his critical thinking, Galante taught and advised students, giving them consequences when they needed them, and always turned a negative situation into a positive one.

Sometimes he didn’t even know the results of his approach.

In disbelief, Galante shares a story of a former student who had some school troubles but had an interest in cooking.  “He had left the school for a more technical one but had shown up one year on Superbowl Sunday with a whole mess of food for me, just to say thanks.”

Despite their 80 plus years of service between them, the Galante Scholarship is something they just cannot wrap their heads around.  “It completely blew me out of my shoes,” comments Nick Galante.

“It was totally a surprise,” adds Pat. Focusing fully on the ultimate goal, the next words he says are a humble characteristic of the Galante family. “The best part of all of this is that it benefits the kids.”