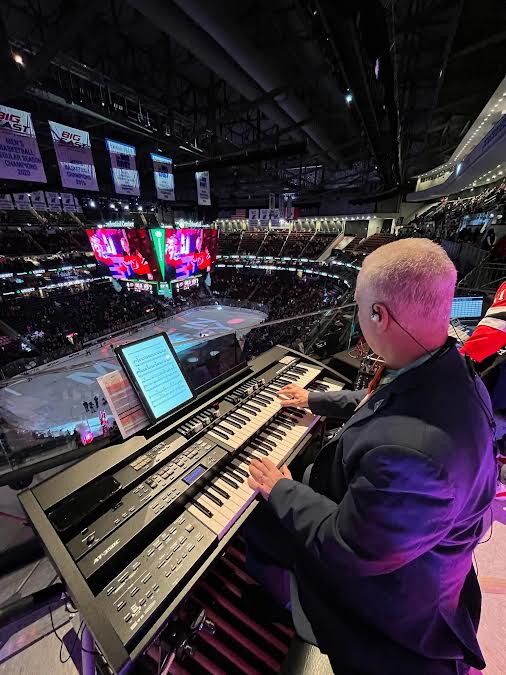 Cannarozzi, a lifelong musician, has played alongside Yoko Ono, Valerie Simpson, George Benson, and many others. Cannarozzi, manning the organ for the NJ Devils, a post he has held now for over 20 years.

This story started in a church in Chicago. When he was 11, Pete Cannarozzi, chest-deep into his Catholic grammar school years, caught the attention of his school principal. There was little Pete, casually, as easily as one might drink a glass of water when thirsty, playing the organ. But not only was he playing it; he was playing it beautifully, and by ear.

The principal assigned the young Cannarozzi to play the Mass, a responsibility that quickly incorporated the playing of weddings, funerals, confirmations, and just about every other formal service the church had to offer is parishioners. Even during baseball season in the spring, where 11-year-old boys across the country tend to find themselves suddenly swamped, the organ awaited what was by then its primary handler—the kid with the golden touch (and ear).

“The principal lassoed me into it,” says Cannarozzi over the phone, recalling those early days that set off a career he could not have possibly imagined then. “But in retrospect, I’m happy he did.”

By 12, he was showing up to gigs. His father served as his roadie, and on weekends for the next six years, he would load that unloadable organ into his truck and together they would hit the road. Unbeknownst to him then, the time playing these gigs planted within Cannarozzi the seeds of what would later bloom into the inner confidence necessary to project himself fully into his music. Clocking in the hours and miles, within time his skillset grew sharper, more precise, his ear more sensitive, more lethal.

Entering his college years at Indiana State University, he wanted to major in music but did not know how to read it. The skills were there, though, and so he matriculated into the basic musical courses to pick up the academics of the trade. Now into his third year, one day he came across a note on a bulletin board calling on an organist able to work immediately, for hotels. He left school at once, and spent the next three years on the road. By the time he came back to Chicago he enrolled in the American Conservatory for Music.

The young man that emerged from those years was a polished debutante part deux, ready to relaunch himself into the great unknown, this time into the teeth of it all.

“I really considered myself a street musician by ear, and a schooled musician by every other standard,” says Cannarozzi, seemingly relieved that his earliest exposures to playing live music did not, in fact, come from inside the cozy confines of a lecture hall basement, but in brick and mortar venues, in front of paying customers, and his supportive father.

This time, Cannarozzi’s inner compass beckoned eastward, and a phone call from a buddy in New York was all it took for him to set his new bearings. His friend, also a musician,  had a really big problem and needed Cannarozzi’s help. The problem: He had too much work and needed someone to give all of his overflow to.

In no time, Cannarozzi, now in the heart of the world’s capital, was playing jingles, film scores, records, backup gigs. He was a solid guy, dependable and of good fundamentals, easy to get along with. Before long, he was working with George Benson, Chaka Khan, Yoko Ono, Ashford and Simpson …

“It snowballed,” Cannarozzi says. “At one point, I had to hire a road crew just to move all my instruments around to each of the studios I was scheduled to play at in a given week, or day.”

A typical day often included a jingle session at 10 in the morning, a film score at noon, and band work at 2.

These were the great times, which would soon enough segue into different—but no less great—times. By the late 1990s, he was hired as an in-house arranger at a jingle company. While working one day in the studio, he received a phone call from the New Jersey Devils, asking if he would be interested in becoming their new in-game organist. Needless to say, he just wrapped up his 22nd year on the job.

“The hardest part of it all was the beginning, really,” he says. “Learning the game. You don’t have to be a fantastic musician, but a competent one. Knowing when to play, what to play, and being able to do it in a moment’s notice. Learning the rules to the game.”

Only two years after he signed on as organist for the Devils, Cannarozzi witnessed first-hand the team’s meteoric rise to the Stanley Cup Finals, and was a part of its victory in those Finals. It is a memory, he says, he will forever cherish.

Aside from his work for the Devils, he also works as a media technician for William Paterson University in Wayne. Here, he works as an audio and video engineer, and also works with professors and students, teaching them to record music into computers.

“I love the people I work with,” he says of his colleagues and students at William Paterson.

For more information on Pete Cannarozzi, please visit his website at www.petecannarozzi.com.