“It’s kind of a surreal moment,” says Hirshon, “when you see that you’ve been recognized because we do a lot of hard work here in our chapter.”

Hirshon was cited for four reasons. He in 2017 formed a first ever chapter of the William Paterson University Society of Professional Journalists (WPSPJ); led an SPJ walking tour of designated literary historic sites this year in Philadelphia; has initiated regular visits by seasoned, working journalists for speaking engagements and forums of discussion with university society members; and for hosting the inaugural New Jersey Journalism Hall of Fame ceremony at William Paterson University last April. 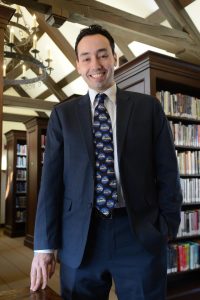 Hirshon, 33, now in his fourth year at the school, started the WPSPJ society for a few reasons. “When I was an undergrad at St. John’s University, we didn’t have an SPJ chapter, so essentially the journalism culture so to speak was just what you and your friends made of it: if you had friends from a class, if you were on the school paper, that was really beneficial. But beyond the conversations of the school paper, there weren’t really opportunities to meet professional journalists and to get a sense of, ‘What’s the industry really like?’ When I look at SPJ chapters, that’s where they can really fill in a gap.”

Anthony Baamonde, a junior, is Sports Editor of the campus newspaper, The Beacon. He has been a member of the WPSPJ since January 2019 and was elected Vice-President at the end of last semester. He has taken classes with Hirshon, benefitting from his tutelage. “Oh, he’s great,” says Baamonde. “I think the most important thing he taught me is the first sentence is your hook to your audience. The lede sentence. He’s a great professor; I talk to him all the time. But he’s taught me a lot, and not just in class. Outside of class, it’s how to be a better member of SPJ, how to write better, how to do journalistic things better like lede paragraphs, how to construct a story better. He’s just taught me how to write better. I mean, I’ve seen my writing change when I started with The Beacon in 2017 to now, and I credit that mostly to him.”

Hirshon, who also garnered a 2019 New Jersey Journalism Educator Award from the New Jersey Society of Professional Journalists, is also an adjunct professor at the Columbia Journalism School, received a Bachelor’s degree in journalism from St. John’s University (2006), a Master’s degree in journalism from Columbia University (2008), and in 2016 a Ph.D. in mass communication from Ohio University. Hirshon is also the author of three books: We Want Fish Sticks: The Bizarre and Infamous Rebranding of the New York Islanders, published in 2018, and two Images of America releases about the Nassau Veterans Memorial Coliseum (2010), the Long Island host arena of the New York Islanders hockey team, and Forest Hills (2013), New York, home for many years to the US Open Tennis Tournament.

What does Hirshon feel is the most important thing he has imparted? “Obviously there are the particulars that we teach in the classroom – how to write a lede, how to compose a nut graph, and all those sorts of things – but as I think Anthony is pointing out, one of the values of the SPJ chapter is how to be a good journalist. How to become a student of the world. How to be curious about things, to be compassionate to the people you’re covering, to be professional. How do you act when you’re in these different situations as journalists: when you’re interviewing someone who’s just experienced trauma, when you’re interviewing people who are not used to speaking to reporters? There’s all of these different ethics that we follow and codes of how to act. When we shadow journalists at events and we start to see, ‘Okay, this is how they’re acting,’ they start to learn through osmosis all of these experiences.”