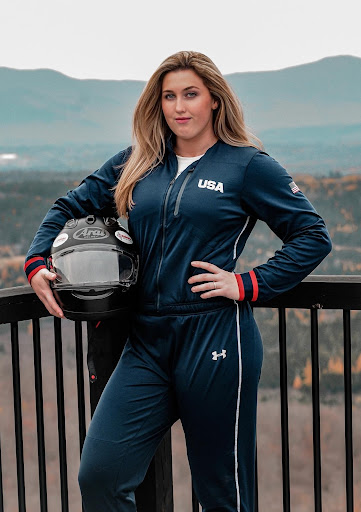 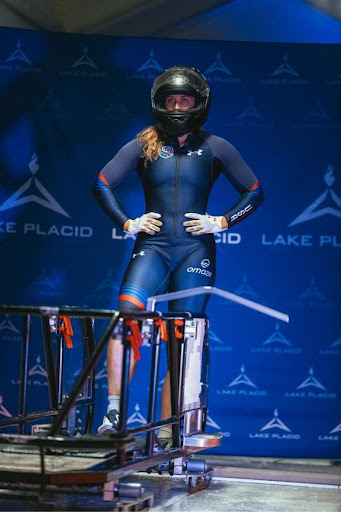 She has a dream.

A dream of wearing the colors of red, white, and blue.

It is all she ever wanted.
An effort to chase the single greatest trophy in all of sports:

She originally thought her dream would be chased through track and field, yet the changing of the world during an unforeseen battle opened her eyes to a new endeavor.

Today, she is ranked 11th overall in the combined women’s standings of the International Bobsleigh and Skeleton Federation. 355 points out of 1st and the 4th highest American woman. She maintains a goal of remaining in the Top 15 and making her dream a reality.

Her dream? Competing for Team USA at Milano Cortina in the 25th Winter Olympiad.

The spirit of competition has always been in Zozzy’s soul. From racing her siblings down her hometown street to the nearest garbage can to adolescent athletics. The passion. The desire. One that ignited her with purpose and being unafraid in sharing that her dream was to be a professional athlete when she grew up. Originally aspiring to become a soccer player, Brzozowski’s journey led her to a full-track scholarship at Elon University, specializing in both 400 and 200-meter events. An epiphany during her freshman year told Brzozowski that if she wanted to be a star, she had to get to Europe.

Following the career journey of Sydney Griffin, a fellow Phoenix, Brzozowski was provided with the needed confidence of taking that next step. As there is no jurisdiction in Europe by the National Collegiate Athletic Association, it showcased to Brzozowski that college sports aren’t limited to the respective university where one competes. In Brzozowski’s case, it was the experience of that initial trip that cemented the next step of her dream becoming a reality.

“I faced a huge culture shock (in Europe). The level of competition is there, but they will not have anything that compares to the NFL or the NBA. The sports are different. The way (an individual) trains is different. I really just felt like a professional athlete. I had coaches, but they really weren’t hands-on (in the vein of collegiate coaches) and I was responsible for choosing my own dream. I am super grateful that I was able to have a taste of that experience because that has set me up for success today,”  Brzozowski says.

Brzozowski was training in Switzerland when COVID hit. An uncertain pause for many. Yet for Brzozowski, it was a pause that ended up opening the door for a new opportunity. A new desire that told Brzozowski she could do that if, for whatever reason, track fell through. The desire to trade in her track spikes for ice spikes.

Brzozowski’s journey toward bobsleigh greatness began by following the journey of two athletes. Veronica Day and Megan Kelly. Day, a fellow Phoenix alumni, competed in skeleton for eight years. Kelly, a fellow athlete within the Colonial Athletic Association (Towson), competed in bobsled and skeleton. With the similar competitive mindset of these athletes combined with the drive of wanting eternal glory bad enough, Brzozowski immediately felt at home in the case of making the transition.

“(Bobsleigh) has the power to unite us all in different ways. Whether it’s bringing us together or getting us through a tough loss, it’s a beautiful thing that I think needs to stay in this world as much as possible,” Brzozowski says.

While no pristine athlete can sleep on their start, Brzozowski says that while she is not an adrenaline junkie, a relaxed approach to her mindset is what helps her mentally focus on balancing anxiety.

“In a sport that is so scary…to be able to laugh at the little things…having a more laid back attitude…because (bobsleigh) is so crazy,” she shares.

Lauren Brzozowski is a reminder that an individual can never say never.

“Never give up on your dreams, because you never know who you could inspire,” Brzozowski says.

In a time where self-confidence is critical, athletes of all backgrounds can look to this 25-year-old athlete and share an emotional connection that anything is possible.

“If I can inspire someone to (chase their dreams) and work hard, then I know that I’ve done my job.”

Whether it’s a televised competition for the IBSF, or trials to make it to Milano Cortina, hearing Leigh Diffey call Zozzy to victory across NBCUniversal’s platforms will help bring that inspiration to fruition.