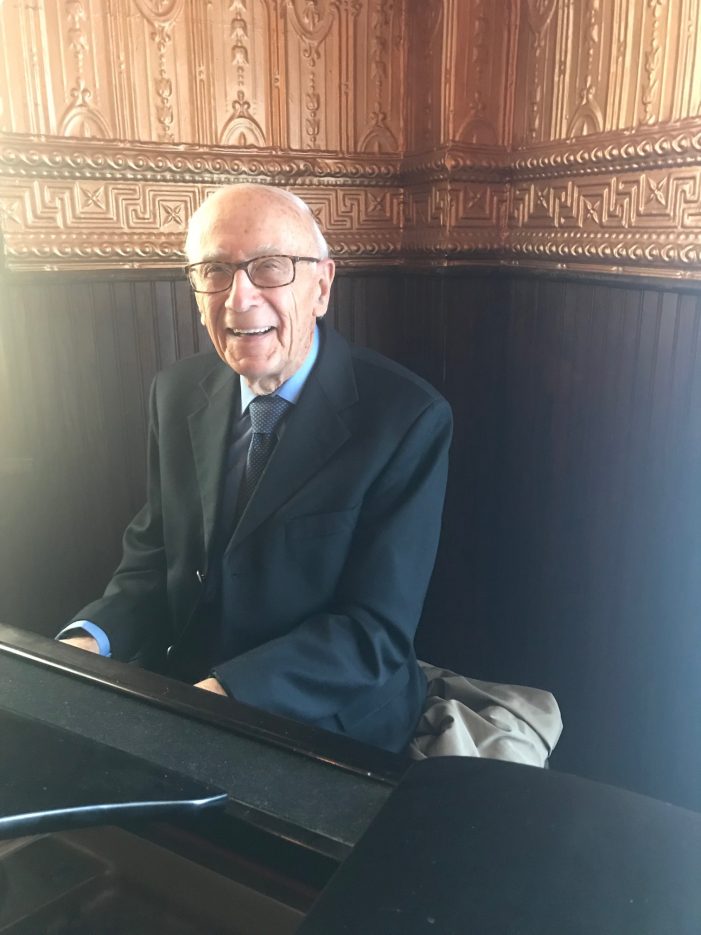 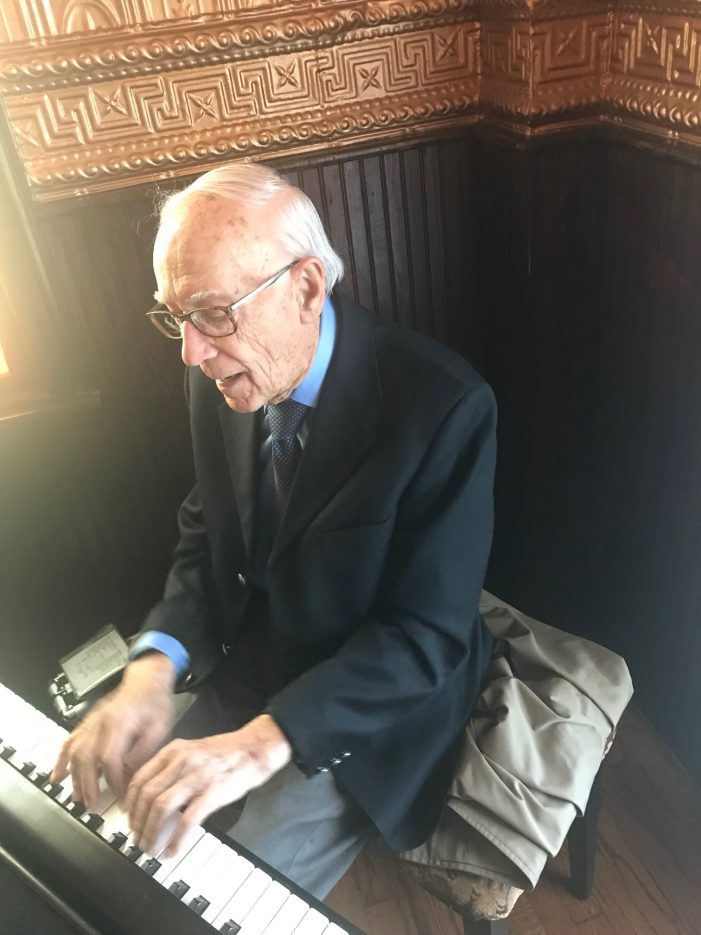 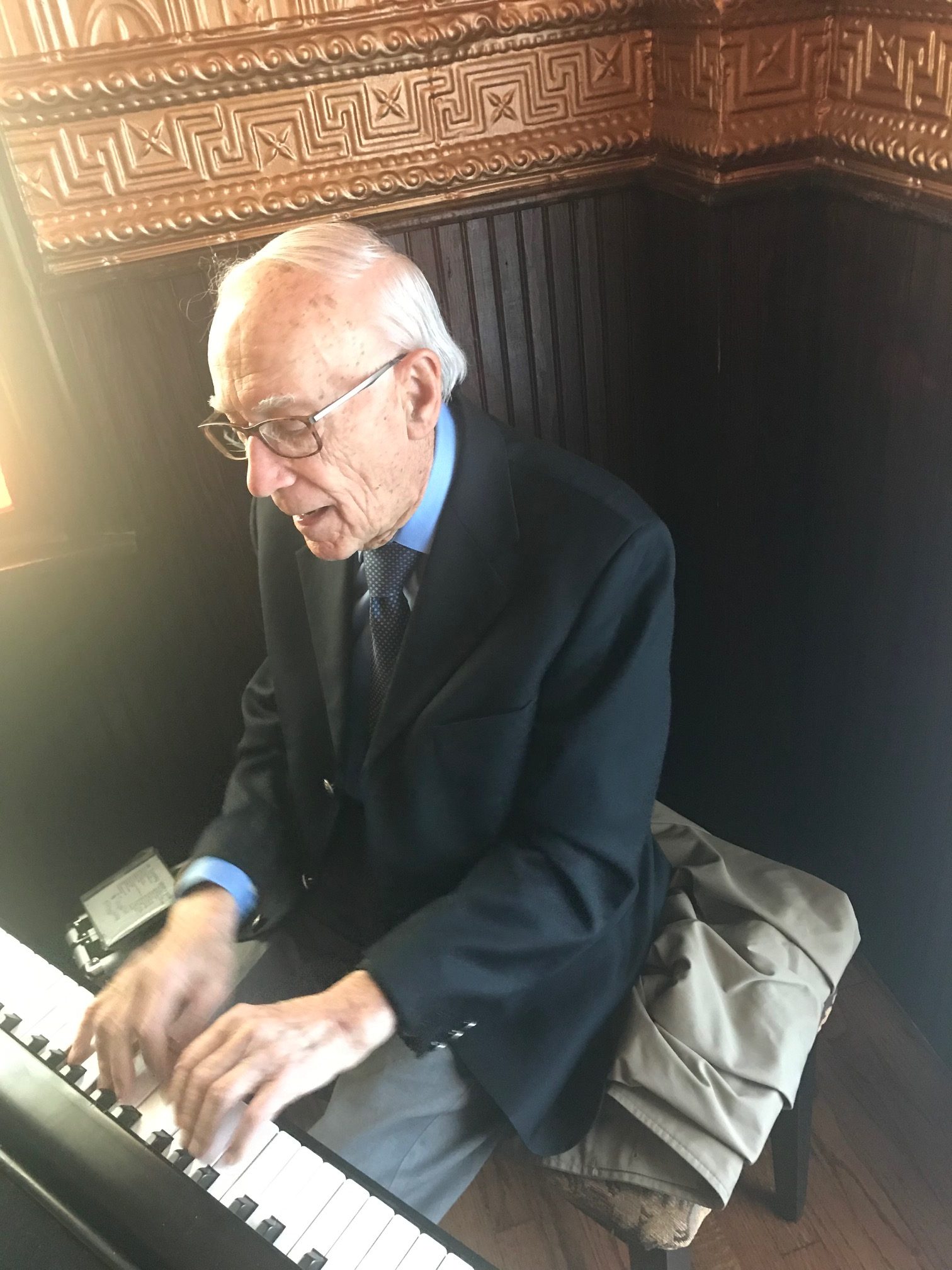 Each Saturday, Henry “Hank” Shapiro sits down to play the piano in his daughter and son-in-law’s Mine Hill home.  Shapiro has played at many venues during his 92 years at the piano, but his latest is far different than the rest.   Through live-streaming on his Facebook page (Henry Shapiro), people as far away as the Netherlands and Australia have been able to enjoy his music, at a time when much of the world could use a little boost and forget Covid 19 for a while.  Recently, Shapiro, who celebrated his 100th birthday on September 13th, his daughter, and some fans shared some of the pianist’s background, how he got into playing his Saturday concerts, and what that music has meant to people.

Shapiro grew up in the Dover area and started taking piano lessons when he was five.  His daughter, Rosalind Lynch, shared some further biographical information on her father’s piano  studies. “He studied with a number of teachers, some local and some in New York.  He studied classical piano, ragtime, jazz improvisation, writing and arranging music and piano technique.  To study piano technique, he went to Manhattan to study with Herman Wasserman, George Gershwin’s musical arranger.” Lynch said.

Coincidently, Shapiro will tell you that he loves to play Gershwin’s music, noting that Gershwin did a number of Broadway musicals.

Shapiro’s first paid gig was at Gearhardt’s on Lake Hopatcong in Woodport; he was paid 75 cents a night.  By the time he was 16, he had his own band which played at popular dance clubs in northern New Jersey, many of which were around the Lake Hopatcong and Budd Lake areas.

World War II came and after serving (the only gap in playing piano), Shapiro returned to the family business: Shapiro’s Modern Economy Store in Dover.  He was married, having wed his high school sweetheart, Doris, before being deployed in the war.  Even though he worked at the store, “music was what I wanted to do,” he said.   He played at various venues nights and weekends; he played restaurants and dance halls in Morris and Sussex counties, rather than trudge into New York.  He credits his passion for music with helping him to put four kids through college.

Shapiro also noted that he lived for many years in Florida. There, he continued to play and especially loved playing the grand pianos at the country clubs.  Returning to New Jersey, he added to his usual venues, assisted living and nursing homes, and performing concerts for local libraries and historical societies.

“I’ve made some wonderful, wonderful friends through the music business.   Having friends is extremely important,” Shapiro said

After surgery in February, Shapiro he stayed at his daughter and son-in-law’s home to recuperate.   They were the ones who suggested the online concerts. Now, although he’s moved back to his home in Wharton, he continues to go to their home in Mine Hill to do the live stream concerts.  His concerts include Broadway show tunes and popular songs from decades past.

When asked how he feels playing in front of what is probably his largest audience ever, Shapiro said, he doesn’t even think about how many virtual eyes are on him.  “I just concentrate on the music and playing,” he said.

While Shapiro said he does not keep track of things like “views”, his daughter and son-in-law do.  Lynch shared that during the “‘live’ time and a half hour later, he gets about 350 views or higher. The total views run between 2500 and 8000, the highest [being] on his birthday.”

“[I] always look forward to seeing Hank on Saturday at 5pm.  We really miss going to his gigs.  He is a bright star in this sometimes dull life these days.  He is a definite inspiration to all who know him and enjoy listening to his fantastic gift he shares with us all,” said fan Kay Avers of Lake Hopatcong.

Fan Barbara Repp of Netcong said, “I love having Hank Shapiro share his music online. We are able to listen to him every week, and we don’t have to go anyplace to hear him.  Hearing him ‘live’ is nice, but in some ways online is even nicer.  I’ve shared the information with several friends who have also become listeners.  If you happen to be busy at 5 p.m. on Saturday, you can always go back and listen at another time.  Listening to Hank is the highlight of my weekend!”

Many treasure Shapiro and that has been reflected locally, in his recent election to the Dover High School Hall of Fame. To catch one of Hank’s concerts, visit his Facebook page at Henry Shapiro.