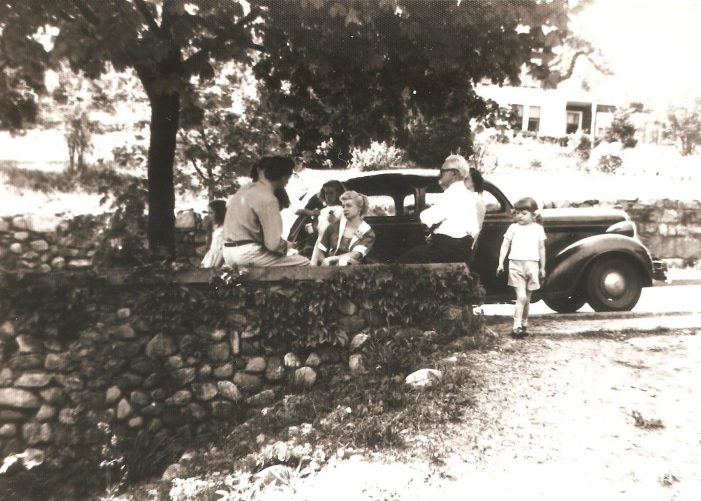 Perhaps the only photograph that exists of the rock wall that my maternal grandfather built on the front yard of his home on Boonton Avenue. Across the street, you can see the old maple tree. 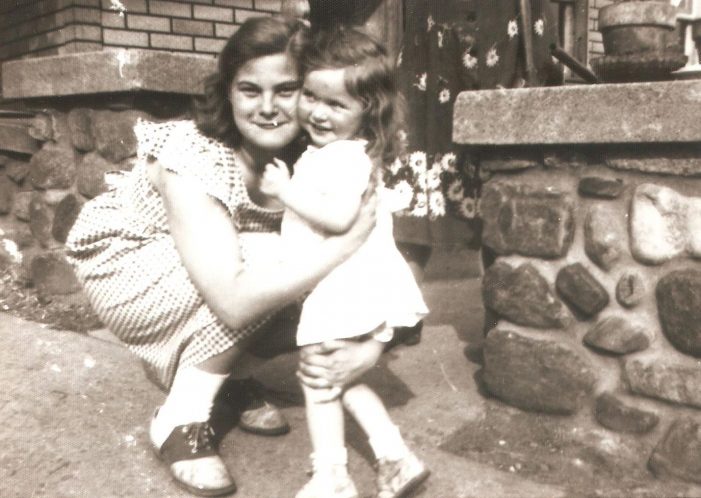 My mom looking so cute, at the age of 15, hugging her niece Sharon. Both of them are now residing in Heaven. I am looking forward to seeing both of them again.

Shortly after the First Word War ended, my maternal grandfather, Edmund C. Kemmerer built a wall in the front of his home atop Boonton Avenue. My mom was the ninth of nine children. On a Sunday afternoon in the mid-summer of 1943, my mom sat upon this very special wall and was reading a book. On the surface it seems like a very ordinary and mundane event. But, in reality, it was a most profound moment.

In the middle of the Summer of 1943, my dad had completed his basic training at Fort McClellan in Alabama. Dad had a week-long furlough. He was then scheduled to report to Hickam Airfield in Hawaii, to be a part of the Seventh Army Air Corps. And, on the Sunday afternoon, of his week-long furlough, he visited his brother Earl and Earl’s wife Eleanor, who lived directly across the street from the Kemmerer family.

This is how the story goes. This is how my dad told my sister Patti and I, a few hundred times, over the years. Before supper, Dad and his brother Earl, took a walk around the yard. They walked to the front yard of Earl’s home. They stood beneath a maple tree and Dad saw my mom, for the very first time. My dad often told my sister and me that it was love at first sight for him. Dad was 18 and Mom was 15.

My dad would often tell the story, with great heart-felt drama. Dad would tell how he had been looking at this beautiful girl, sitting on the stone wall in front of her house and she never once looked up from her book. Dad told the story of how he asked his brother Earl who this cute girl was, and Earl told Dad that she was Janet Kemmerer, the youngest of the Kemmerer clan. Dad would often say how, standing beneath the shade of that maple tree beside his brother, he decided he was going to marry this pretty girl.

Those few precious minutes, where my dad saw my mom, from across Boonton Avenue that Sunday afternoon, was the only time that Dad saw Mom before reporting to Hickam Airfield in Hawaii. But fate and destiny were to be kind to be beloved father. The Kemmerer family attended the Boonton United Methodist Church, as did my Uncle Earl and Aunt Eleanor. During World War II, the church had a program where they encouraged people to write to the men and women who were serving in the armed services.

My Aunt Eleanor gave my mom, my dad’s name and address at Hickam Airfield to write to him. I suspect that my Uncle Earl told Aunt Eleanor that my dad had asked about my mom, during the few minutes that Dad and Uncle Earl stood beneath the maple tree, while Mom read a book sitting on her rock wall.

Well, Mom did write Dad. And, I’m glad she did because I don’t know where I would be if she didn’t. Dad often said that when he was granted leave, he stayed in his barracks and wrote his mom and dad a letter. And, also wrote a letter to the pretty girl who was reading a book, sitting on the rock wall, across the street from his brother Earl’s house.

Dad would put a little flannel in his remembrances and say to my sister and me, “I think I used to write three letters to your mother before she finally wrote one back to me.”

Then my mom would say something like, “that’s not true, Dick and you know it. It was more like the opposite way around.”

And they would go on and on, with this joyful bickering about who wrote to each other the most during the time that Dad was stationed at Hickam Airfield. I remember this happening, from time to time, all through my years of growing up in the old Mabey Homestead.

To some extent, I believe in fate and destiny. Sometimes, it causes me to shutter to think what if Mom had not been sitting on her rock wall, reading a book, that exact moment in time when Dad and his brother Earl walked along Uncle Earl’s front yard and stopped to talk beneath the shade of that old maple tree. I don’t know where I’d be today.

Life is funny, with its twists and turns. I never did thank Grandpa Kemmerer for building that rock wall, when he was a young man. For without that rock wall, my mom might have resorted to sitting in her backyard, out of sight from Dad on that fateful Sunday afternoon. You just never know how carefully the good Lord has planned everything out.