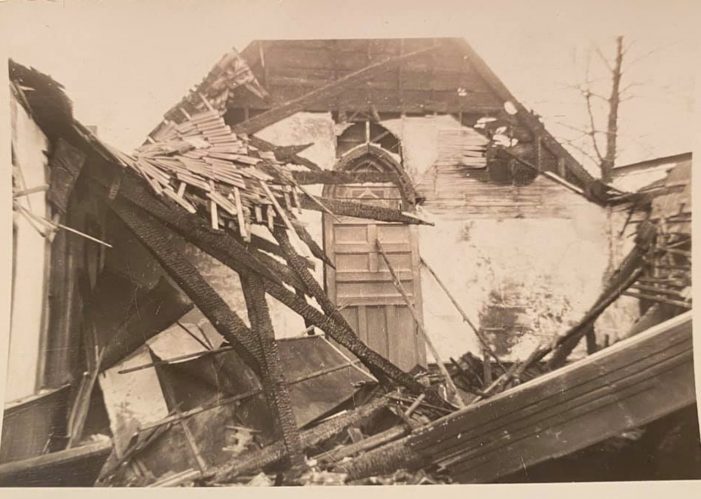 The original chapel destroyed by fire in 1942 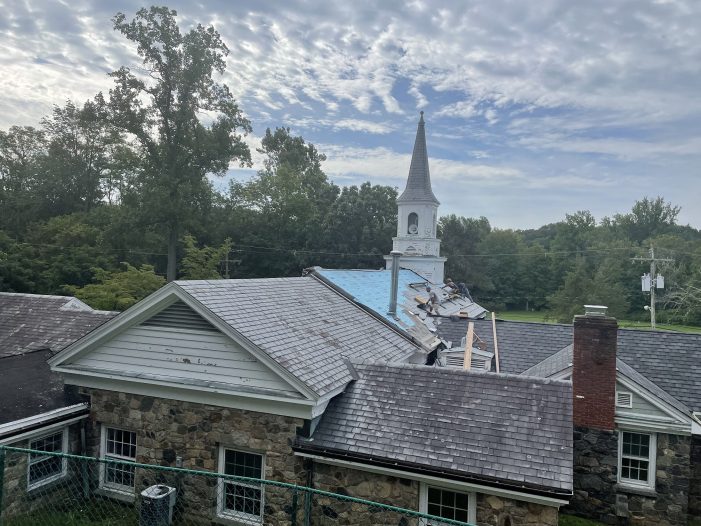 The repair project in progress 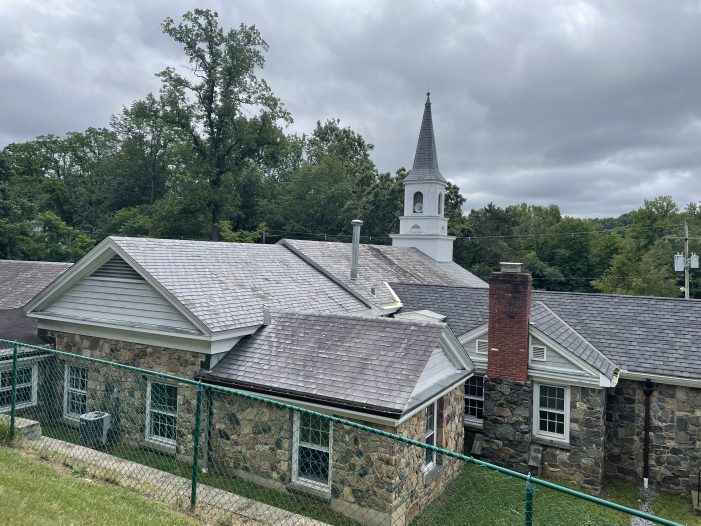 Brookside Community Church prior to its roof repair

community presence since 1947, to get an upgrade.

The congregation recently embraced a “Raise the Roof” campaign, seeking to replace the Pennsylvania Slate Roof that had protected the sanctuary for almost 75 years. The original goal was to have funds in the amount of $130,000 raised for the project, and that goal was almost met as of late October.

The campaign’s success was a great relief to Trustee President Catherine Pierson, who spearheaded the project. “We are so pleased that we have been able to maintain the historic character and look of the church by replacing the sanctuary roof with slate and refurbishing the copper snow guards and gutters. For more than 70 years, the church has served as an anchor in the Brookside Historic District of colonial-era homes.”

However, further issues were discovered. Next to the actual church building, the attached McKinnell Center’s roof was also in peril, and an estimated $40,000 was needed to fund that project.

Rev. Nicolette L. Siragusa has been Pastor of Brookside Community Church for two years. “We thought that it was a simple gutter repair,” she says of the McKinnell Center, “and in the process of repairing the gutter discovered that the entire roof needed to be replaced. You can’t wait on that with winter coming; you can’t put that off until spring without risking further damage to the building. So, I have a really great team who is concerned, and they’re willing to spend money now to preserve and protect so that it doesn’t end up being a greater cost later. Not every team is willing to do that, but they want to make sure that these buildings – they’re one of our primary tools for ministry – that we use them to reach out to the community and welcome the community in. We need to make sure that we’re taking care of them and keeping them safe as well.”

Brookside Community Church started as a Sunday school and church services that met in the town schoolhouse in the 1860s. “It wasn’t until 1895 that they drew up plans to build a chapel,” Rev. Siragusa says. “We had our building done at the beginning of 1899.” The chapel was destroyed by a fire in 1942, and was rebuilt in 1947.

During the period where Covid-19 reigned and the buildings, especially the church, had been under repair, there

has been a sense of quiet inside the sanctuary. “I think that it was a time of rest for the building,” Rev. Siragusa says in reflection. “I think about field farmers, knowing that the soil needs to rest, letting a field fallow so that it will be more fruitful the next season. And that’s how I think of what was happening with the building and grounds during this time. It allowed us to reach back, to think and to discern what this building means to us and has meant to us.” The congregation returned indoors full-time for services the first weekend in November.

For more information about the church and donating, visit www.brooksidechurch.org.