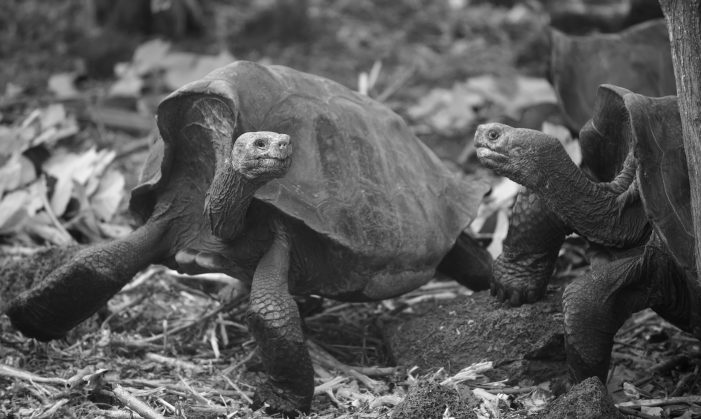 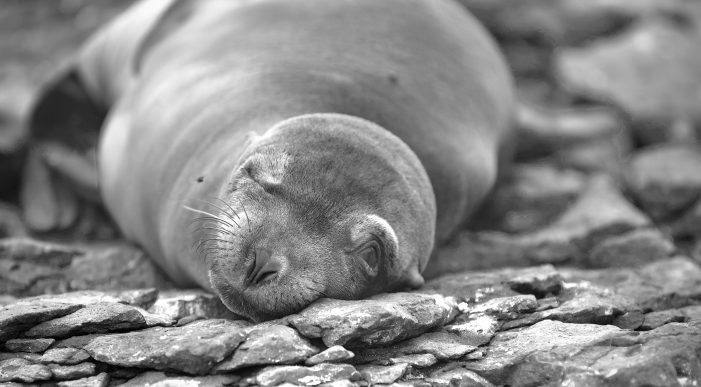 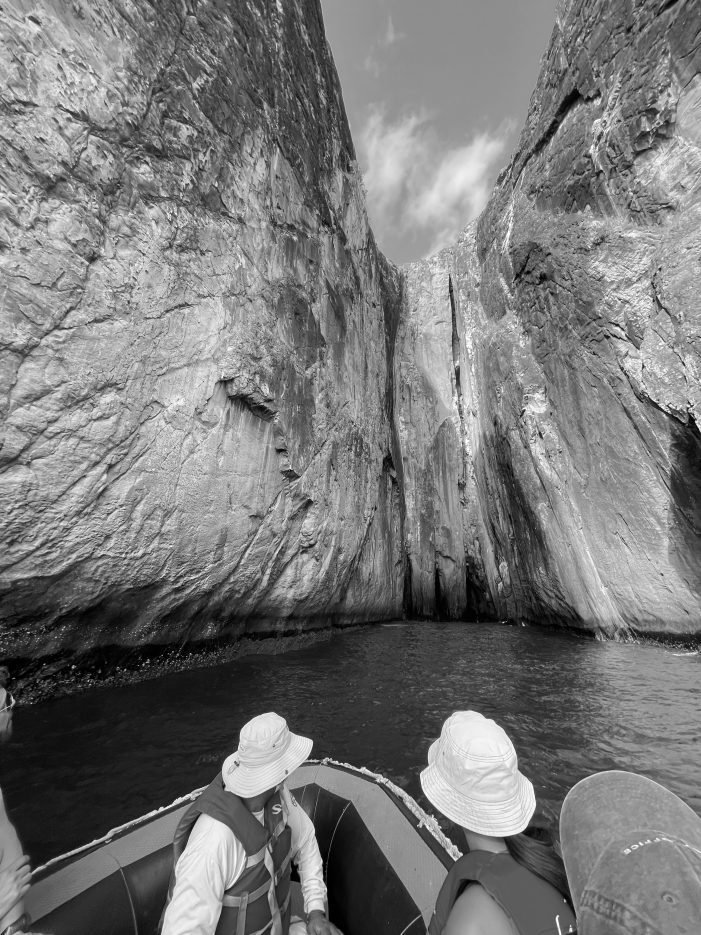 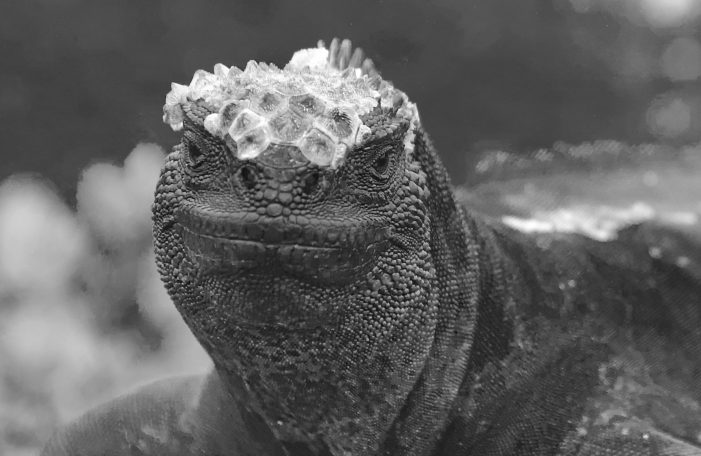 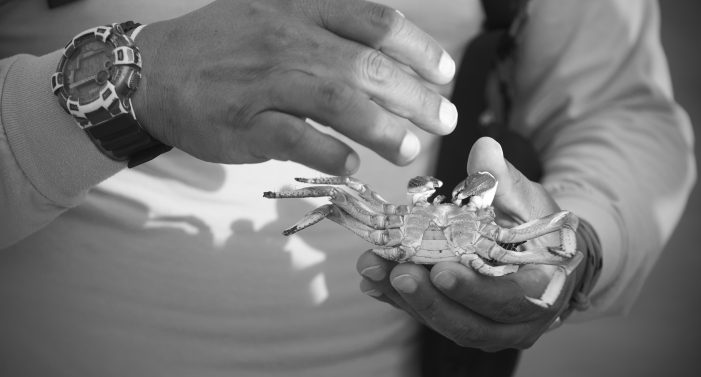 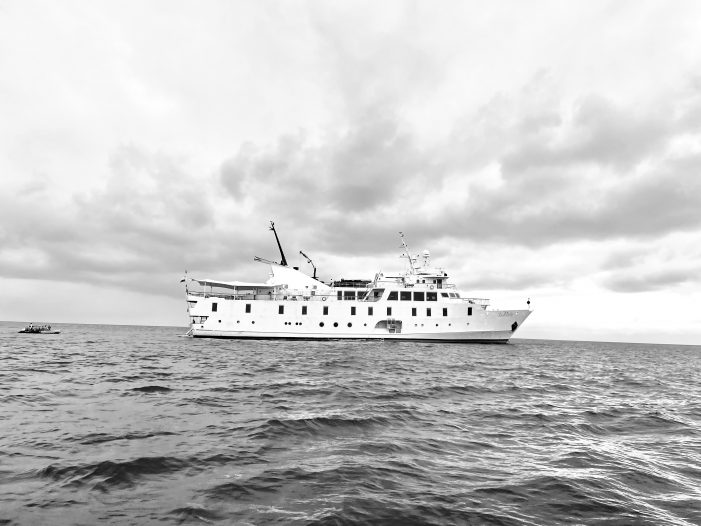 La Pinta, our home for the week.

Morristown resident Paul Partridge has been building a travel bucket list for years. Now he’s diving in – near and far – and shares his adventures in this column.

The Galápagos Islands were everything I expected – and even more that was unexpected.

Text and photos by Paul Partridge

vA sunrise flight from Ecuador’s capitol city Quito brings us to Baltra Island and the waiting cruise ship La Pinta. With only 24 total cabins, La Pinta is an ideal size – big enough to have all the amenities you need/want and small enough to provide lots of personal attention. The cabins are larger than typical cruise lines.

Within hours we’re into our first island expedition – exploring South Plaza Island. Ten eager passengers leap into a Zodiac boat a la Jacques Cousteau (the locals prefer the name panga boat). Approaching the island, I’m expecting to see exotic wildlife, and I’m not disappointed. Sea lions, iguanas, fiery-red crabs, sea turtles, albatrosses – they’re all here in abundance. But what I’m not prepared for is the strange landscape they inhabit:

A cross between an Arizona desert, a Dali painting, and the surface of Mars – stunning . . . spectacular . . . otherworldly. Seeing the Galapagos in person vs. in books is like seeing Bruce Springsteen in concert vs. reading the liner notes on his album.

I suspected it yesterday but now I’m convinced: there’s some sort of inter-galactic transformation that happens in the panga ride from La Pinta to the island. Because once again, we’ve landed on another planet. This one is called Santa Fe Island. It looks nothing like South Plaza Island – or anything else on earth. More like something created by Dr. Seuss.

We’re greeted by a welcoming committee of sea lions and Santa Fe iguanas. Like my wife’s Italian aunts, these iguanas never leave their neighborhood throughout their life.

After the hike, it’s time for snorkeling. We’re swimming alongside so many fish and sea turtles that it makes breathing difficult. Not because our snorkels don’t work, but because we’re stopping to laugh out loud at the shear spectacle of the show.

Shrieks of, “Did you see that?!” echo across the bay.

The La Pinta guides are impressive in their knowledge of and respect for the Galapagos ecosystem. They’re happy to share as much information as we can absorb. The crew, likewise, is first-rate. They take care of everything from our wetsuits to our favorite cocktails.

Today our guide Dries takes us for a rigorous morning hike on the eastern tip of San Cristobal Island. We’re negotiating boulders and climbing cliffs. The effort is worth it. San Cristobal evokes Utah, Nevada and Colorado crossed with Catalina Island. Around each corner is a more spectacular view.

After the hike we paddle kayaks for a bit, then go for a swim. What starts off as a cooling dip turns into frolicking fun with sea lions. Curious and puppy-like, they seem as fascinated with us as we are with them. Their favorite trick is to swim right up to your face and peel away at the last second.

As my wife is snorkeling, two sea lions swim alongside and a third one jumps clear over her as if performing at Sea World. I put on my mask for an underwater view. The jumping one comes at me so fast that I leap up, startled. He glides over and sticks his head above the water. Wait – is he laughing at me? Then he playfully nibbles my leg as if to say, “Hey, don’t worry – I’m just having fun.” I’ve swum with dolphins before, but nothing matches this experience.

In the afternoon we’re back in the panga for a coastal expedition of Cerro Brujo. Then some r&r on Cerro Brujo’s gorgeous white coral beach. I hear one woman – a very experienced world traveler – say this is the prettiest beach she’s ever seen. Difficult to disagree.

As La Pinta sets sail for Isla Espanola, it’s happy hour on deck. Look off the stern. There’s an orca whale breaching. Look west and there’s a jaw-dropping sunset over Sleeping Lion Rock. The sunset has 3 acts: Wow!… Glory be!!… and, Are you kidding me!!! as the colors intensify and burst across the sky like fireworks.

Today we explore Punta Suarez on Espanola, the southernmost of the Galapagos Islands. Its flat, lava/boulder terrain is home to many bird colonies and iguana – including the Christmas Iguana, named for its green and red coloring. So far we’ve seen mockingbirds, frigatebirds, albatrosses, red-billed Tropicbirds, three kinds of boobies (red-footed, blue-footed and Nazca), the Galapagos hawk, doves, gulls, and the legendary finches of Darwin fame. A blue-footed booby calling all the single boobies with a left-foot-in, left-foot-out hokey pokey mating dance gives us a chuckle. Albatrosses doing beak-fencing is also a hoot.

Fatima, our guide, leads us to a cliff on the southern side of the island. “Wait for it!” she says. We watch in anticipation as a large wave rolls in. A loud whoosh, then a geyser of water blasts through a lava blowhole, spraying water 70 feet into the air.

More great snorkeling in the afternoon, and another chance to swim with happy-go-lucky sea lions. Schools of fish are everywhere, including yellow-tailed surgeon fish, king angelfish, sergeant majors, parrotfish, and sea turtles. 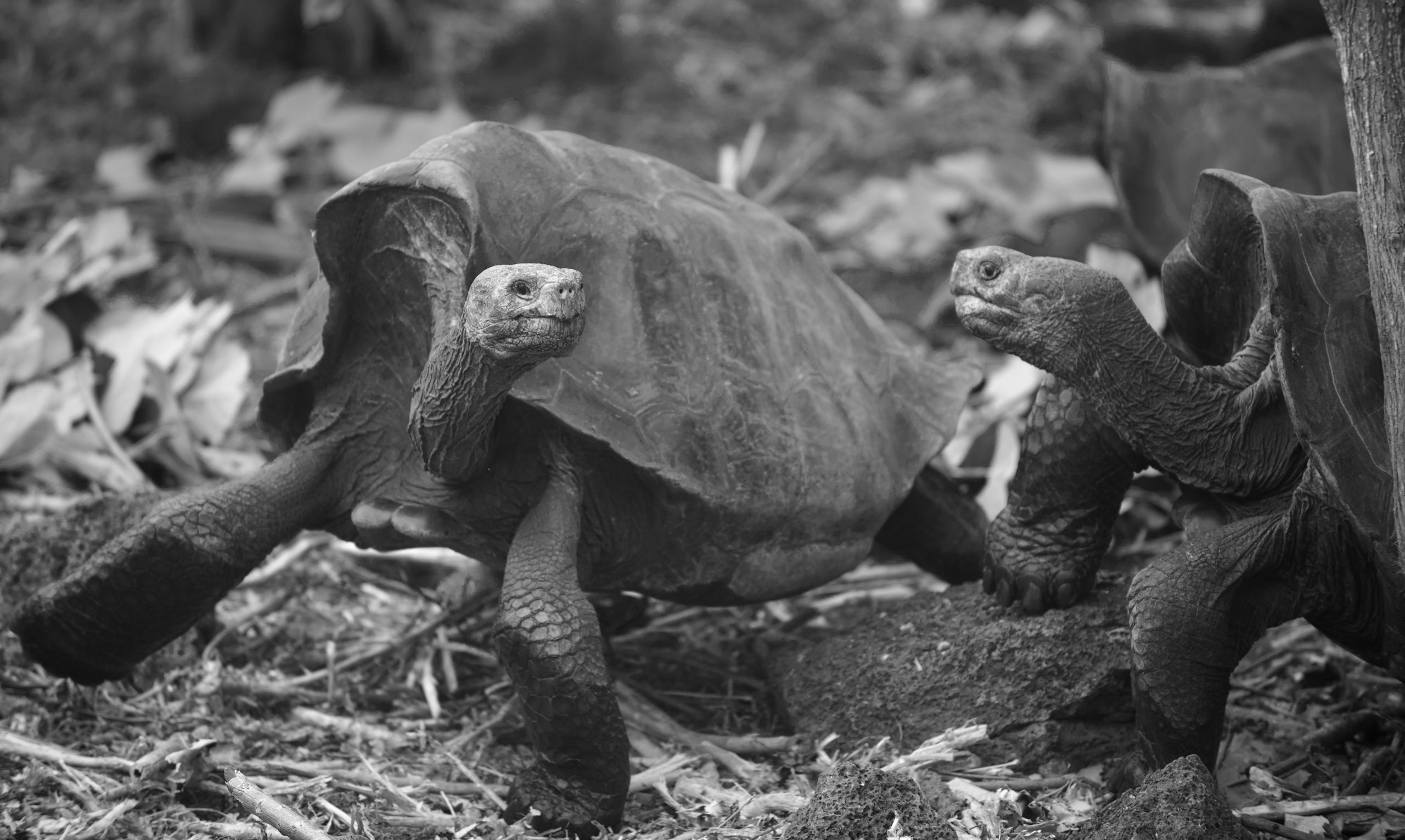 The last day is giant tortoise day. Weighing up to 550 lbs., their huge size led 16th century Spanish explorers to apply their Spanish name to the whole archipelago. We visit the Charles Darwin Research Station, the captive rearing grogram for giant tortoises, and see these impressive creatures up close. Young tortoises are protected here until they have grown large enough to be safely released into the wild.

When septuagenarians get together, they talk about their aches and pains. I wonder what tortoise groups talk about when they reach 90 and 100 years old.

Maybe their great-great-great grandchildren. Or how fast time goes by.