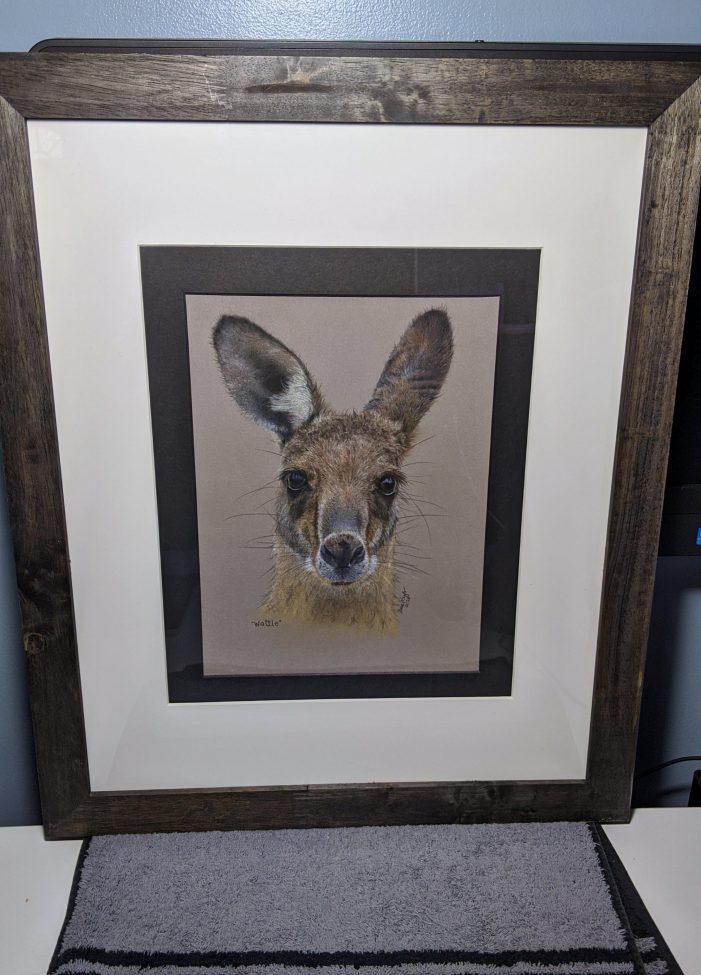 When Budd Lake artist and animal lover Tina Bernabe-Reyes heard about the countless animals perishing in the recent wildfires plaguing Australia, she was not only deeply troubled but energized to help.

“I kept watching the news about the awful fires in Australia and when I saw the injured koala’s trying to escape… it broke my heart,” Reyes says. “Images of kangaroos fleeing for their lives was a lot to take in. So many needed care to hopefully return to the wild again.”

She immediately thought of Wildlife Warriors, a non-profit organization dedicated to protecting and championing animals.

“My son loved watching Steve Irwin growing up and they have done so much for wildlife over the years,” she shares.  “Now these terrible wildfires over there…. what better way to give back. They are an inspiring group of people,” Reyes enthuses.

Turning to her artistic talents and passion for art, Reyes decided to sell her work on eBay as a kind of raffle to raise funds for Wildlife Warriors and animal protection. Ultimately, she decided to transfer her efforts to GoFundMe instead when she had no response with eBay.

In just a matter of weeks, she created a unique drawing done in pastels of one of Australia’s signature animals–the kangaroo.  Fully framed and matted, Reyes calls her creation “Wattle” after Australia’s national flower.

Reyes’ drawing captures the realistic and emotional mood of these animals. This 9×12 picture of Wattle is bordered in a 16×20 inch frame.

50% of all proceeds from the money raised from her prints will go to the Wildlife Warriors. Reyes explains that since she plans to continue in her quest to help these animals, the other 50% of monies raised will go towards art materials so she can create another drawing for another raffle.

So far, in the time that “Wattle” has been on GoFundMe, the drawing has raised approximately $120 of Reyes’ $500 goal.

Reyes discloses that she discovered her passion for art during her childhood. “Most of my childhood was spent at Shriners Hospital in Philadelphia because I was born with multiple disabilities. Being in the hospital for a week to maybe a month at a time I just started drawing to pass the time,” she shares.

Studying art, entering contests, even selling pieces, Reyes explains that she has explored all mediums of art in its various forms, but it’s pictures of animals that she enjoys creating the most. “It’s when people wanted me to draw their dogs because they passed away is where I thought I could bring a smile back to their faces,” she says.

It was a sentiment that she tries to capture in all of her artwork. Reyes explains that she had been inspired to create “Wattle” upon seeing other artist’s drawings of Koala Bears in their own efforts to raise money for this worthwhile cause.

She decided to go her own way, drawing a kangaroo.

In this donation with a twist event, Reyes explains that for every person that donates, their names will be entered in a random name generator to win this drawing.

I hope a lot of the animals will get the care they need and rebuild some of the habitats that were lost,” Reyes asserts.

When asked if she plans to do more for charities, the answer was a resounding yes.

“I’m planning to draw more wildlife and sell prints to which I’ll donate part of those to different charities here as well and around the world, every little bit helps. I just hope that people will buy my prints and pay it forward. I just love drawing and if I can create something that people love and give a little back, why not?”

Founded in 2002 by Crocodile Hunter Steve Irwin and his wife Terri, Wildlife Warriors seeks to include and involve caring people to support the protection of injured, threatened or endangered wildlife. The organization not only seeks to protect individual animals but also entire species of them.