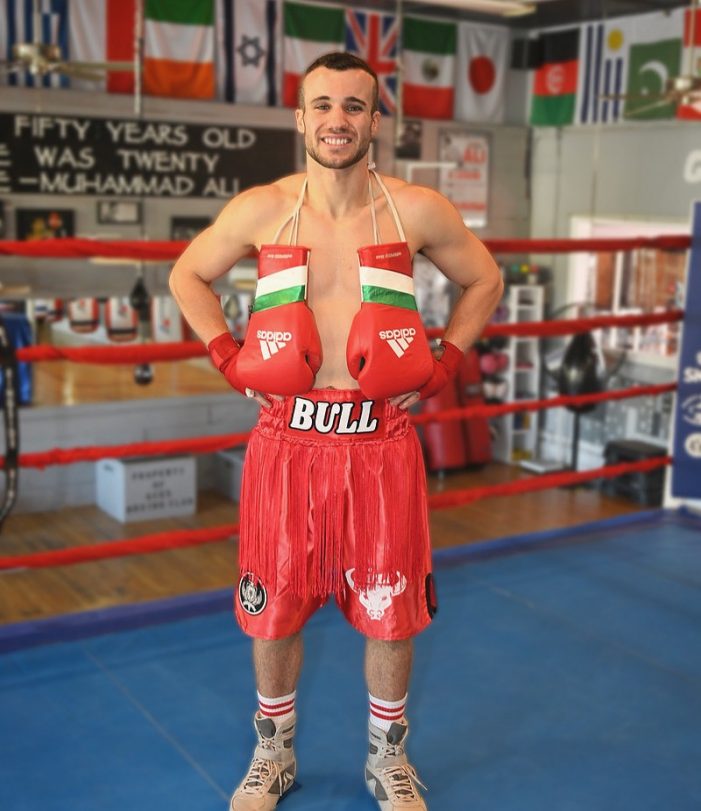 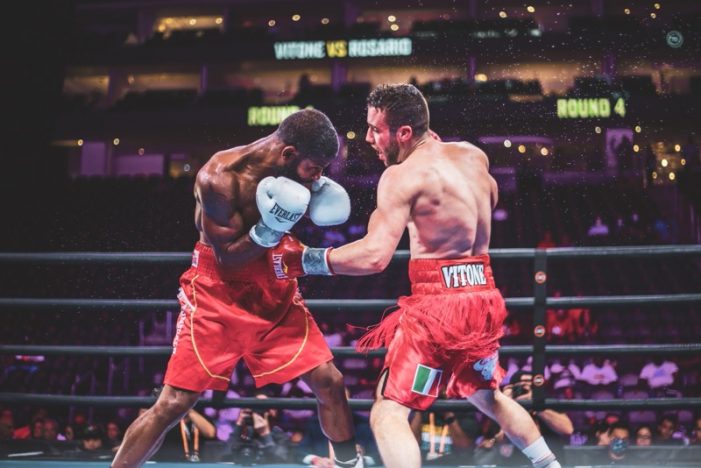 On a recent chilly February morning, Caldwell boxer Nicolas “The Bull” Vitone was in Sussex County, preparing to head to Ace’s Boxing Club in Boonton. There he would train once again with his coach, Joe Zabry, the same coach he’s had since he first laced on boxing gloves 12 years ago.

“I’m growing and getting better,” Vitone says. “I believe it’s just the beginning, and that I can do something great in this sport.”

Vitone’s current record as a professional boxer is 6 wins, 1 loss, and 1 draw, and those 6 wins for the super lightweight have all been by knockout.

Vitone, who was born in Denville and grew up in Montville, had his first amateur fight at age 16. He won that fight, and he’ll be 26 soon, and his ninth professional fight is this April. In addition to his successful win-loss record, another highlight is that he has boxed at the Prudential Center in Newark as part of the Premiere Boxing Champions Boxing Fight Night.  “I’m living my dream right now,” Vitone says.

Vitone, whose grandfather was a former Golden Gloves boxer, considers himself a “throwback fighter.” “I work the body well. I really do consider myself a bull. I do come forward, and I have great defense and offense. I believe I’m an all-around fighter,” he says. He counts among his favorite boxers Sugar Ray Leonard, Arturo Gatti, and Roberto Duran.

Vitone’s pathway to the sport of boxing was forged, in a way, via the gridiron. He played football his entire life and loved it, but when he entered his freshman year of high school, he was a lot smaller than the other players. “I thought I was pretty good when I was younger, and then I stopped growing,” Vitone recalls. “I went to every practice, worked hard, but didn’t get much playing time.”

That lack of playing time, coupled with Vitone’s fascination and interest with boxing, as well as the desire to stay in shape, was the start of his own path to the ring. He was also encouraged by his older sister’s friend to join Ace’s Boxing Club, which at that time was located in Pine Brook. “I stopped in and basically fell in love, and was hooked after that,” he says. “Just honestly, I was just so fascinated by everything about it.” For the rest of that first day, he tried to edge his way towards the speed bag when he saw others pounding it.

Vitone, whose early bouts were all four-rounders, won his first four professional fights, the initial victory coming in August 2020 with first round knockout of his opponent, Kire Lucas. After then suffering a controversial draw and loss in his fifth and sixth bouts respectively, Vitone came back on November 20 of last year with a second round TKO of Quadarrius Hopkins, and then scored another second round TKO in his first six-round bout against Jared Glenn on Saturday, February 5, in Rock Hill, South Carolina.

However, it’s not just about the wins and the successful record for Vitone. It’s also the education in the ring. “I’m never perfect and I’m most critical of myself, and I grow from every fight, win, lose, or draw,” Vitone says. And as he approaches his next fight on April 2 at The Terrace in Paramus, that maturation as a boxer continues with confidence. “That includes my training, just being comfortable in the ring, and just growing and getting better with each fight. I consider myself the hardest working boxer out there, and I believe I’m going to earn everything I want in this sport.”

For more information about Vitone and his boxing career thus far, visit his Instagram page @thebull.vitone. Tickets for his upcoming fight in April are available at Ace’s Boxing Club in Boonton, or via email at thebullvitone@gmail.com.