Campbell Jackson Seeks to “kick out” COVID-19 With Unique Fundraiser 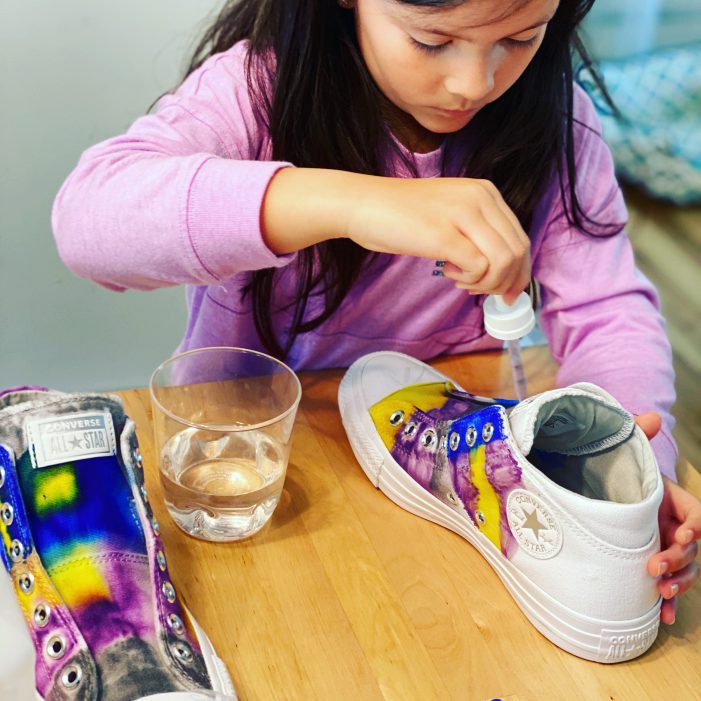 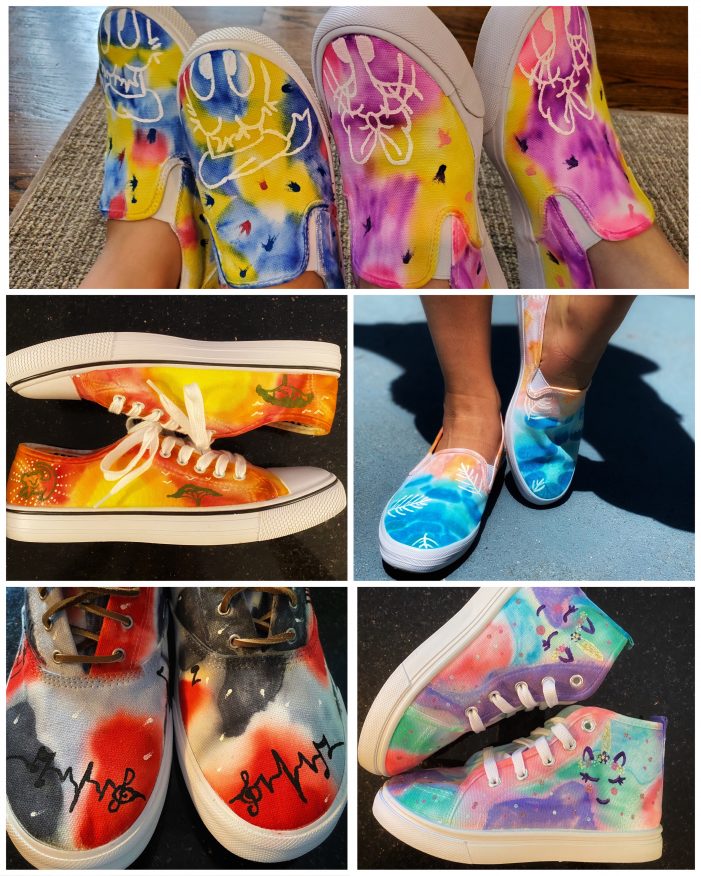 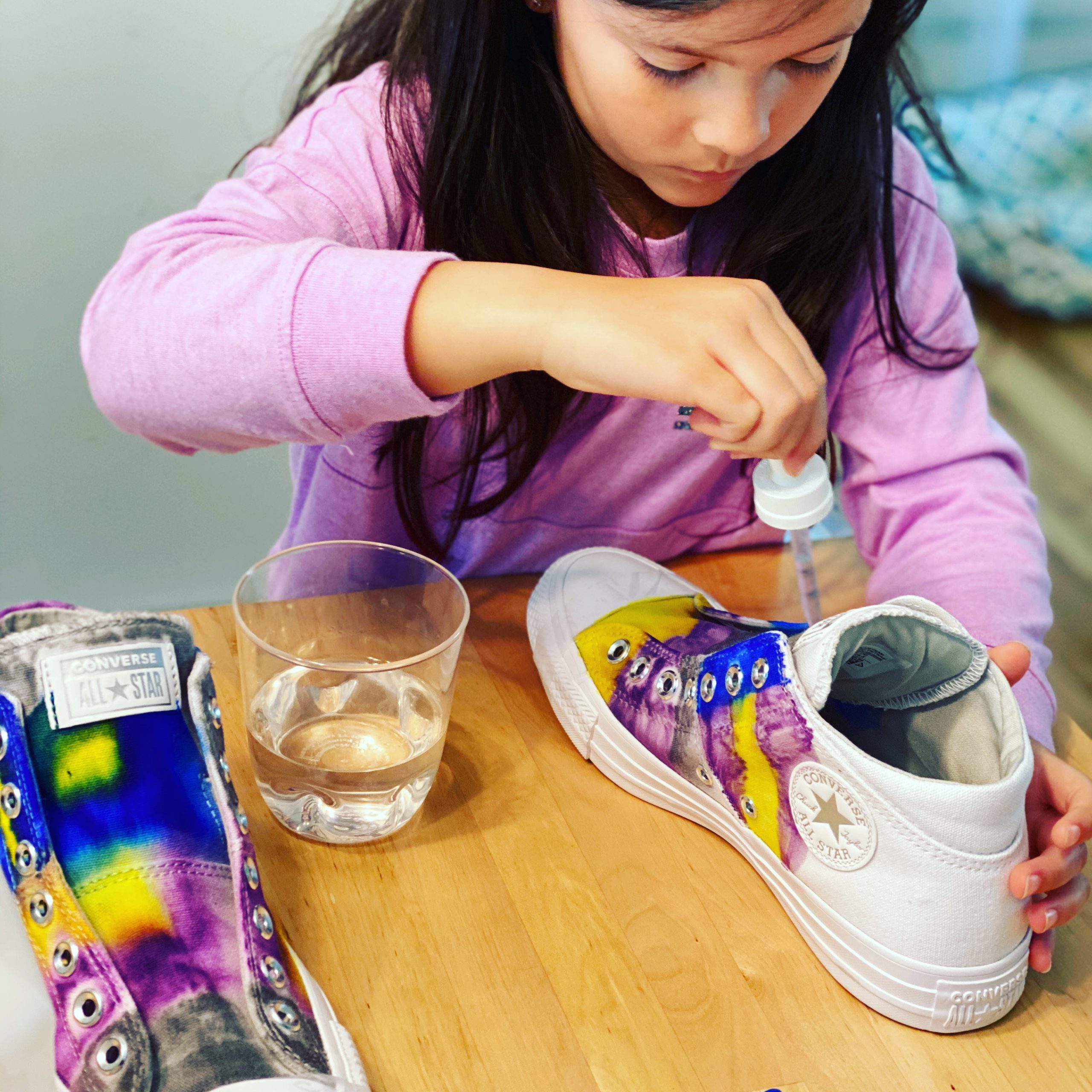 And hers is a unique, thoughtful way of doing so. She has created Campbell’s Kicks, where she creates colorful artwork on white canvas sneakers for donations.

For Campbell, who attends Ironia Elementary School, it was a fondness for a performer that encouraged her fundraiser. “When I was decorating shoes, I was watching my video of my favorite artist, Jordan Fisher, and he was doing a concert to help raise money for charity. I said to myself, ‘Maybe I can make a difference in the world, too.’ So, I decided to start my own business, Campbell’s Kicks.” Each time she decorates a pair of sneakers, she gets the money and delivers it to charity.

Here’s the process. Once someone drops off a pair of sneakers, Campbell uses Sharpie markers and colors them, then gets rubbing alcohol “to bleed it and make it nice and smooth. And then I paint them, and then I vinegar them, so they don’t bleed onto your socks.”

Primarily Campbell does sneakers, but has done a few ballet slippers as well for dance teachers, and for aching brides’ feet for their receptions. Thus far, Campbell’s completed workload tally is at 80, and she has raised about $1,200, which has been donated to the New Jersey Pandemic Relief Fund. Campbell has also been focusing on donating to Feeding America, and since October has raised almost $700 for that worthy organization. She also made an appearance on “Good Morning America”, and Barbara’s Bakery donated $50,000 worth of products to Feeding America in Campbell’s Kicks name.

The GMA virtual appearance was towards the end of the summer when producers saw Campbell’s Facebook page. “Someone shared it with a friend of a friend,” says Kristen Jackson, Campbell’s mom, “and she reached out to me towards the end of the summer and said, ‘Hey, someone forwarded me Campbell’s Facebook page, and I started reading her website and all the stories and watched her video,’ and it happened to be a talent producer for GMA. It kind of just snowballed from there.”

Prior to the GMA episode, 90% of the orders came from the Garden State. Afterwards, orders have come in from California, Georgia, South Carolina, Virginia. “(From) all over now,” says Kristen, happily. “It kind of changes the model a little bit, because we have (locally, at her home) a drop off bin, but now people are shipping them to a P.O. box in Morristown, so we can get sneakers from all over now.”

Per Campbell, she accepts footwear donations, as well as Sharpie markers and rubbing alcohol, but she also says that spreading the word is most important.

Expanding has been discussed. “She (Campbell) has talked a little bit about this,” says Kristen. Since the style that Campbell does tends to appear like it’s been tie dyed, there has been discussion about the potential for tie dyed socks to go with the footwear. “But other than that, we haven’t quite gotten there yet,” says Kristen. “We are still trying to catch up on orders that are coming in from all around the country.”

Campbell, whose favorite subject in school is (surprise) Art, closes by saying, “I love giving back to other people.”