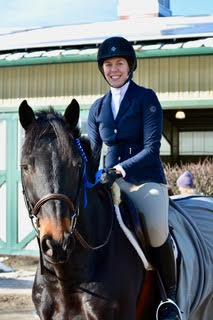 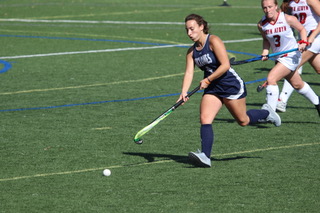 Two Centenary University students recently had articles published in professional media outlets, a testament to the University’s strong emphasis on writing within Centenary’s core curriculum and beyond. The students—sophomore Michaela Thiessen of Augusta, N.J., and junior Haylie Kerstetter of Coatsville, Penn.—both said Centenary’s core curriculum prepared them to accept invitations to write for the USA Field Hockey website and The Plaid Horse and Horse Nation, respectively.

“The ability to communicate, verbally and in writing, is critical to success in every career,” said Amy D’Olivo, Ph.D., vice president for academic affairs at Centenary. In addition to incorporating writing within Centenary’s core curriculum and in major fields of study, the University now offers a Bachelor of Arts in Writing to prepare graduates for careers in journalism, public relations, marketing, and other fields that require effective communication skills. “Our core curriculum is rooted in the humanities, emphasizing practical skills that are sought-after by employers.”

A high school field hockey player, Thiessen chose to attend Centenary after the University re-instated its field hockey program. Once enrolled, she decided to major in film studies, with minors in dance and theatre. Thanks to Centenary’s extensive core curriculum, which emphasizes communication skills, Thiessen has formed strong bonds with several of the University’s English and writing professors, as well as those in her major field of study.

When USA Field Hockey sought a Centenary player to write about experiences with a first-year program, Thiessen jumped at the invitation. “First, I was excited. Then, I became a little nervous,” recalled Thiessen, adding that Centenary faculty have encouraged her to pursue several internship opportunities. “My professors are phenomenal. They’ve taught me that if you have talent, you can accomplish things you didn’t think you were qualified to do.”

Thiessen’s piece for US Field Hockey discusses what it’s like to be a student-athlete in a fledgling varsity program. A first-year leader at Centenary, she also plays on the lacrosse team and participates in Centenary Stage Company productions—on-stage and backstage, as well as working in the theatre box office and filming and editing the company’s productions. Read her US Field Hockey story.

Co-captain of Centenary’s hunter/jumper team and a member of the University’s IHSA team, Kerstetter is majoring in Equine Studies: Communications for the Equine Industry, with a minor in social media marketing. In September, she began an internship handling social media posts for clients at Meraki Creative Group.

At around the same time, she merged her love for horses with her interest in writing to begin pitching stories to The Plaid Horse and Horse Nation. To date, Kerstetter has published three articles: “Understanding Kissing Spines” and “Breaking Down the Prepurchase Exam,” both in The Plaid Horse, and “Why Everyone Should Compete at the Thoroughbred Makeover at Least Once” in Horse Nation.

“I chose Centenary because I believe this program is one of the best if you want to have a career in the equine industry,” said Kerstetter, who has also served as a volunteer with Centenary’s therapeutic riding program. “When I visited Centenary, I really loved the riding program and knew that I would be able to learn from it. Each of the professors in the Equine Studies Department has their own business and connections in the industry, so anytime students are looking for a job or internship, the professors are there to provide options almost immediately.”