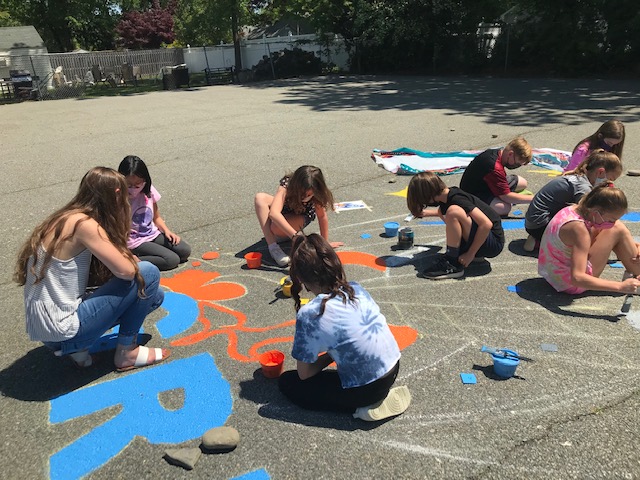 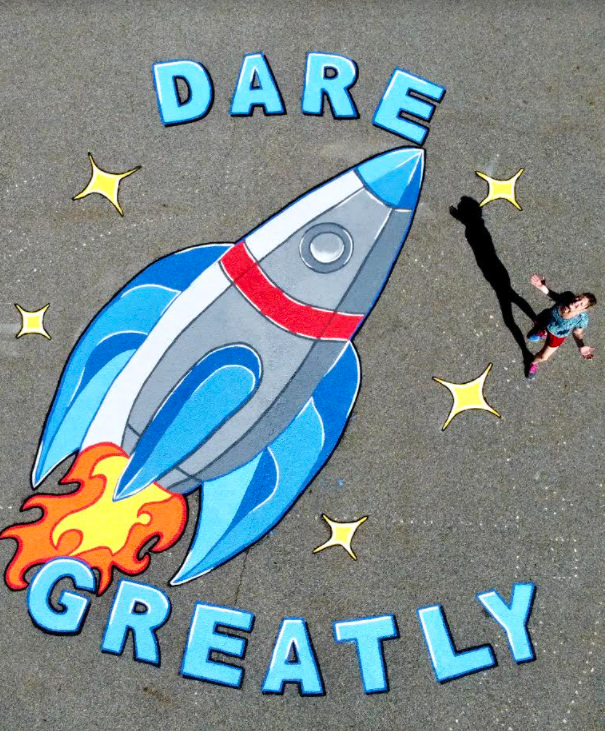 Sue Sylvester, in her 6th year as an art teacher at Denville’s Riverview Elementary School, was formerly a corporate graphic designer.

Then she headed to Montclair State University to get her certification to teach what she loves. “Here I am,” she says happily, “and it’s all good.”

Sylvester, a College of New Jersey graduate, explains. “My Principal, Tina Theodoropoulos, had approached me and said, ‘Sue, I would love to have a mural done, because this past pandemic year was so challenging, but also just to show we have all dared greatly.’”

Coincidentally, a few years back Theodoropoulos had required reading of author Brene Brown’s book, Daring Greatly: How the Courage to Be Vulnerable Transforms the Way We Live, Love, Parent, and Lead. “Making yourself vulnerable, putting yourself out there, kind of like taking the leap out of your own comfort box and doing something really fantastic, which we all we’re very proud of surviving this pandemic,” says Sylvester. “And, in general, how we dare greatly into the future.”

The colorfully created mural – an aloft rocket ship powered by flames and surrounded by yellow stars and the words “Dare Greatly” – is on display on the playground itself at the Riverview Annex property. Sylvester’s son, Stephen, an aerial drone photographer, also used his talent to get a super shot of the work.

“I have never been approached about a project of this size and dimension,” says Sylvester. “In fact, I dared greatly on this, and I told the students that. I never did a blacktop mural, let alone something of that scale. It’s rather large and it took a lot of effort and a lot of planning. This wasn’t like, ‘Okay, let me just whip this up.’ I want to say that they (the students) were almost the ‘Founding Fathers’ of possible projects to come in the future.”

It was decided that the mural project would be a farewell project for the 5th grade, something they could reflect on as they headed to middle school and their future. Sylvester coordinated it with the 5th grade staff and students, she sketched and laid it out for them, and did some Home Depot color shopping. “They (the students) literally sat down and they kind of did shift work; they kind of worked themselves in and out so every student had an opportunity to paint.” Sylvester went in at mural conclusion and added a few details, but she praises the great effort. “For the most part they did a beautiful job. They just had such excitement in their minds. One little boy he said to me, ‘Ms. Sylvester, when I come back when I’m 90, I’m going to look at that and say, ‘I painted that star.’ It was a really great project to be part of.”

Due to the types of materials and paint used, the mural won’t disappear anywhere anytime soon. Future students will enjoy and be inspired by it. “I might have to probably touch it up here and there over the years,” says Sylvester, “but for the most part, it will kind of stick around for a while.”

The mural can be seen at the Riverview Elementary School Annex located at St. Mary’s Place in Denville.