Diary of a Scout Leader: My Week as Mayor of Lincoln Park 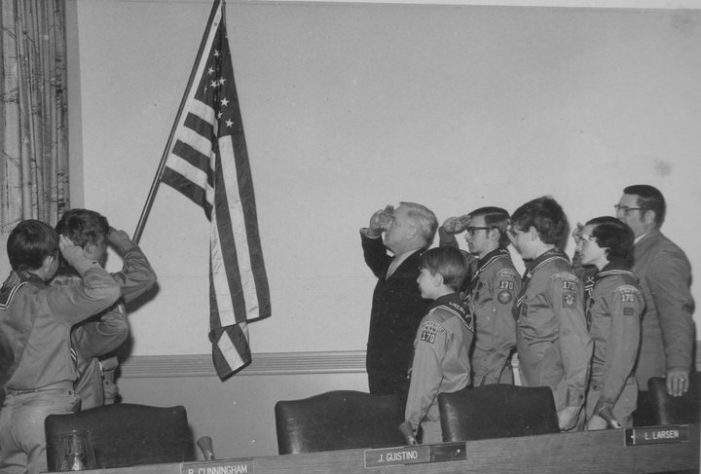 A rare photograph of the flag salute ceremony that began the Town Council Meeting, at which I served as Scout Mayor. Yours truly is standing directly behind Mayor William A. Dixon. 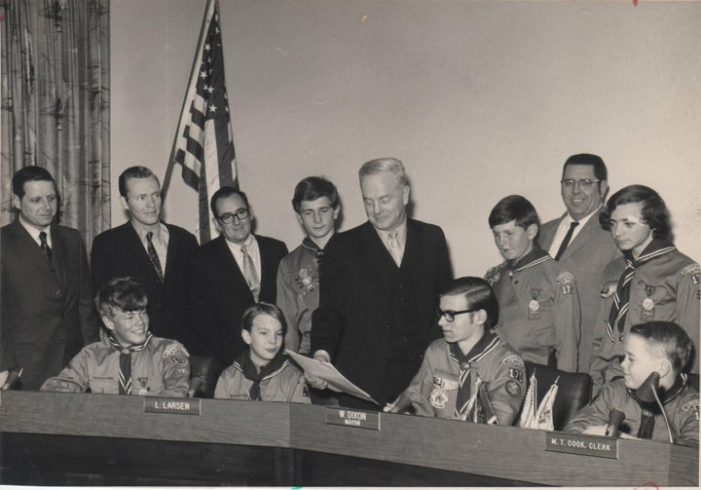 Yours truly presenting the recommendations for town improvements to Mayor William A. Dixon, surrounded by Town Councilmen and the Scout Town Councilmen.

February eighth of 1971 was a day that would forever change my life. From that point on, my life would never be the same. For it was on that Monday evening, that I addressed the Town Council and residents of Lincoln Park as their Mayor. This was not a joke. Back in 1971, there were four Boy Scout Troops in Lincoln Park: Troops 70, 76, 170 and 216. Every scout in all four of these Boy Scout Troops casted a vote for the scout who would serve as Scout Mayor during Boy Scout Week, which began on Sunday, February seventh and ended on Saturday, February thirteenth.

The Honorable William A. Dixon was Mayor of Lincoln Park at the time. I had the high honor to spend that Monday, February eighth, with Mayor Dixon from early morning till the close of the Town Council meeting that evening. A lot of my friends at school thought this was a big joke. A lot of my relatives thought that it was cute. But, I assure you, this was very real. It was very, very real.

I sat behind the Mayor’s desk that day. Mayor Dixon sat beside me at that desk and guided me through the day. I took all the Mayor’s telephone calls that day. In the course of the day, Mayor Dixon explained in detail the duties and responsibilities entailed in being the Mayor of Lincoln Park. I learned more in that one day, about small-town government, than I did in taking two years of United States history at Boonton High School. It was truly a very high honor and a golden opportunity to learn about the governmental procedures of my dear old hometown.

I am proud to say that my fellow scouts, who were serving as Town Councilmen and myself made some recommendations, which were enacted upon, in the Borough of Lincoln Park. Some of them I still remember. They may seem like small potatoes now, but the fact that a group of Boy Scouts were actually allowed to have a very real say in local town government was quite a phenomenon.

At the baseball field at Chapel Hill School, there was no garbage can along side the bleachers behind the first base line. We put in a recommendation to have a garbage can, with a swiveling top, placed there, and it was so enacted upon.

Also, the big swing set in the old park where Chapel Hill School met Boonton Avenue needed to be anchored down. At the time, there were six swings on that large swing set apparatus and if children and young people were on all six swings at one time, the rear bars would slightly rise up, creating a bit of a safety hazard. I am proud to say that due to our recommendation, all the bars on the big swing set were anchored down with cement.

I remember, oh so well, those 15 minutes or so before the Town Council meeting began. I was a nervous wreck. I trembled within. I made Barney Fife look cool, calm and collected. The Borough Chambers were filled to standing room only, with a lot of people standing in the back of the room. My mom and dad and my sister, Patti, were among the townspeople present. I remember that my hands actually shook, I was so nervous. But Mayor Dixon told me to relax and to just be myself and everything would be okay.

So, at the age of 17, I was running the entire Town Council Meeting. This was no joke. This was the real thing. I remember when the meeting first began, I stuttered a bit. Then, about 10 minutes into the meeting, I was in full command. This was my moment and I had worked very hard to earn this glorious moment.

In order to have the day off from school, I was required to write a report about my day as Mayor for my U. S. History II class. I remember that I got an A on that report. Mr. Winters, my history teacher wrote in red pen, on the last page of my report, that he actually learned some things about small town government, from reading my report. I remember how deeply honored I was that he wrote that.

It wasn’t all peaches and cream. My picture made the front page of the old Lincoln Park Herald. A lot of my fair weathered friends at school, mocked and ridiculed me. They said things like “here comes the boy sprout mayor,” and other cruel and crude remarks. It hurt me deeply. I think that when all was said and done, that they were just a little bit jealous of my accomplishment. High school kids can be very cruel.

I am immensely grateful to Mayor Dixon for all he taught me about small town government that day in February, nearly 50 years ago. Mayor Dixon is in Heaven now. At 66, I now recognize a debt I can never repay. I do my best to be true to the values of selfless service to others that Mayor Dixon lived all his life. He was truly a good man.