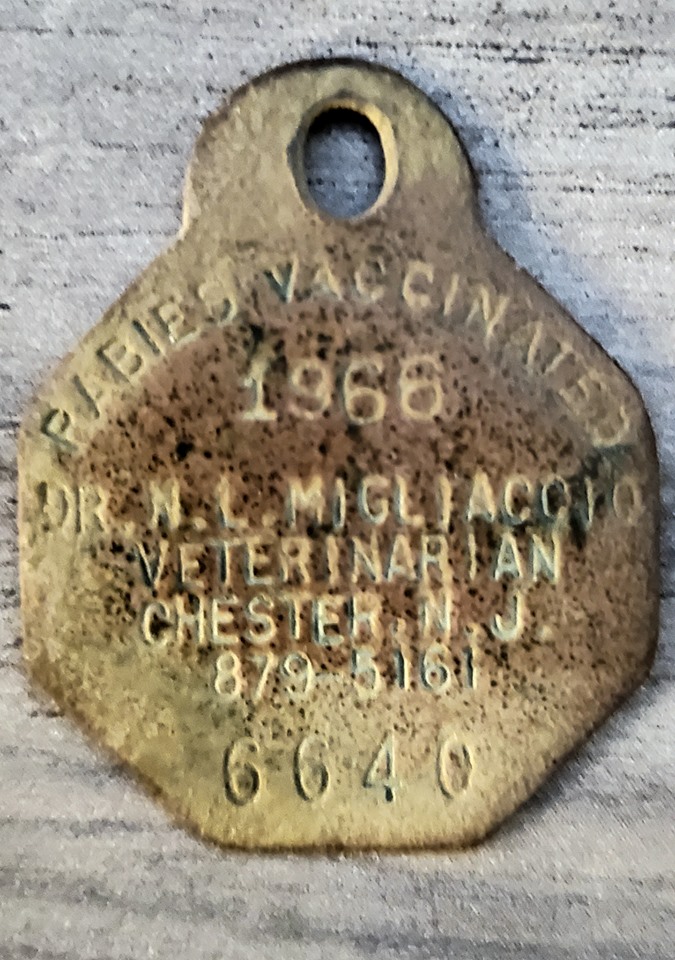 A local veterinarian received a blast from the past recently from a team of young metal detecting buffs on a mission to recover and preserve local history, one dig at a time.

David Migliaccio, DVM, owner of Chester Animal Hospital on West Main St., was excited to hear that a group called Copper Heads Metal Detecting had uncovered a relic of his father’s old veterinary clinic during a dig last summer: a rabies vaccination tag dated 1966, engraved with his dad’s business name and address.

It all started when Copper Heads founder Trey Crawford, of Mt. Arlington, and member Julian Viciente, of Parsippany, got permission to dig around a property near the old Cooper Mill in August, on some 2.5 acres dating back to pre-Revolutionary War times: a digger’s dream.

In the day before landfills, most people would bury broken or used items somewhere on their property, creating an underground timeline of life during different eras. It’s one of the best things about metal detecting around old homes, Crawford said.

“We get excited when we find an old trash dump from the 1800s,” he said. “These guys were throwing it in their backyards.”

Which is why he and his crew – co-founder Clay Kemple and his wife, Trish, of Holland Twp.; Viciente, and Greg Wolf, both of Parsippany; Christopher Kelly of Long Island, N.Y.; and Mike Meehan, of Millburn – are motivated by the imagined stories behind their treasures.

“When we find things, it builds a story about the age and what was happening at the time,” Crawford says. The Chester dig revealed old metal toys and coins from the mid-1900s, “So there were definitely kids there at one time, in the back yard.”

“But then I found a coin that’s possibly from the 1700s in the same yard,” he added. “It’s the progression of history that’s happening at that place.”

“We call it a hobby, but it’s also our passion; we love doing it,” Crawford explained. “It’s about saving history.”

Crawford started his hobby as a kid, fossil hunting with family in his native Kansas City, MO. “The thrill of the hunt sort of thing,” he says. “As I got older, I got into metal detecting.”

Moving to New Jersey four years ago, he found that hunting grounds on the East Coast can often date back to the Revolutionary War.

“Out here… everywhere you go you’re seeing things from the 1700s and 1800s,” he says. It’s not the same in the Midwest, where bounty tends to be from more recent eras. “They have history too, but out here it’s so rich.”

Local homeowners are often friendly and interested in the process, he adds: “When they’re living in a house that’s 200 years old, they have some sort of interest in preserving the history. That’s our hobby and our mission.”

The owner of the property they were excavating near the Cooper Mill had actually discovered a cache of 1800s bottles stored under their kitchen floorboards, Crawford said. And he and Viciente had yielded a good day’s dig from their yard: assorted copper and silver coins, horse shoes, wheat pennies, an old Ford Model T engine part, some old metal toys, and the pet tag, clearly engraved “Dr. N.L. Migliaccio.”

They immediately wondered if the veterinarian was still in practice, or if his family was somehow still in the area. It turned out that while his clinic was still thriving, the elder doctor had passed in 1990.

Dr. Nicholas L. Migliaccio had opened Chester Animal Hospital in 1950, and in 1955, bought and moved into the house next door, according to the clinic’s web site.

“Mom and Dad bought the property in 1955, then built the garage. That’s where he had one of his first clinics,” Dr. Dave Migliaccio said.

Half of the garage was used for the waiting area and appointments, while the other half was used for the senior Migliaccio’s traveling business as a “dairy practitioner,” a vet who worked on cows for the area’s multiple farms, he added.

Known better as “Dr. Dave” among clientele, he took over his father’s clinic in 1985. The house has since been sold to Toys With Love.

Migliaccio said he did recall hearing through social media about a rabies tag that had been found, although he said hasn’t yet spoken with the Copper Heads crew. It would be interesting to find out who the pet’s owner was, he said, but that seems unlikely.

“I kept the logs to these tags for many years afterwards,” he said, but just two years ago he cleared out much of the clinic’s old paperwork. “I know I don’t have them now.”

He said he does still have his father’s original medical cabinet, preserved and placed in the clinic’s lobby to display his dad’s old tools of the trade, adding that it would be nice to display the found rabies tag there as well.

“It’s part of our heritage, so to speak,” Migliaccio said.

“We thought it was so cool when we found the tag,” Crawford said. “Then to do a little more research, and find that his son is in the same position and in the same spot” was amazing. “I would love to return it. I hope Dr. Migliaccio would like it back.”

Crawford said the Copper Heads do what they do for the love of discovery, not for monetary gain; he’s never sold anything he’s found and does not plan to in the future.

The group is now partnering with America’s Grow a Row in Pittstown, an award-winning charity dedicated to growing free produce for the needy in New Jersey, New York City and eastern Pennsylvania, and providing information on sustainable farming methods and other food education.