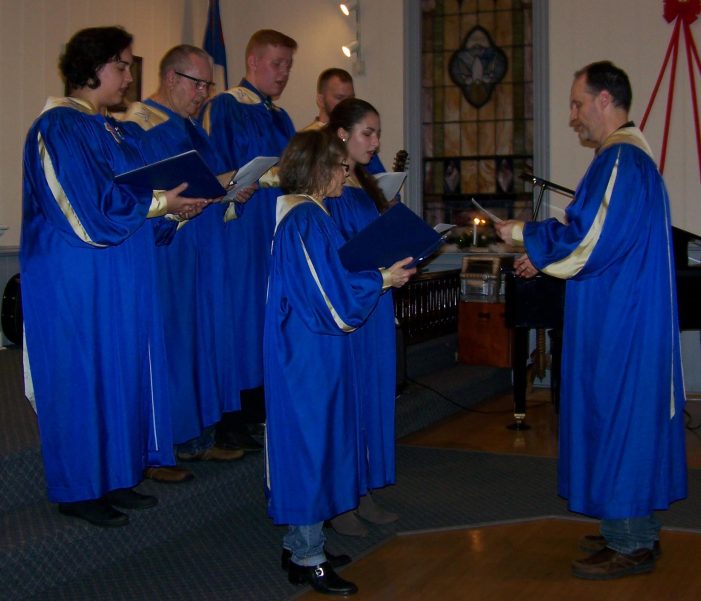 Members of the Port Morris United Methodist Church acapella choir singing at a past ecumenical program. 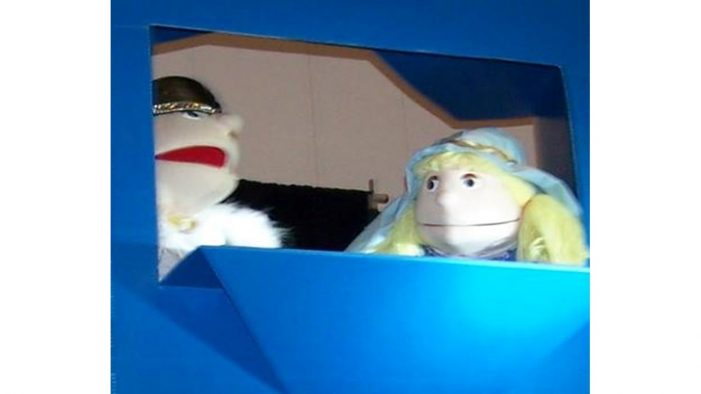 Puppets portray the angel Gabriel coming to Mary in a past scene from the ecumenical nativity program.

Much like the three wisemen who brought their gifts to the baby Jesus, the Port Morris UMC  (United Methodist Church) has hosted a yearly “Christmas Through the Arts” advent program where area churches bring together their gifts to tell the story of the nativity.  This year marks the 20th anniversary of the program through which the scenes of the nativity story are portrayed through song, instrumental music, puppetry, liturgical dance, chancel drama, chancel comedy  and more.  This year’s program is on Sunday, December 4th at 5pm at Port Morris UMC on     296 Center Street in Landing (parking on the street and in the back parking lot on Main Street).

“I am excited to be part of the 20th Annual Christmas Through the Arts program at the Port Morris United Methodist Church. Beginning Advent in a way that brings together not only the members of my own church but members from many different churches and denominations enables an expanded sense of community as we prepare for the Christmas season. It’s always a pleasure to see, hear and feel how each church expresses its excitement and joy as they await Christmas Day,” shared Richard Boyer, Jr. of Budd Lake, director of the Port Morris UMC’s      acapella choir.

The program started in 2002 as the result of a chance “how’s your week been” conversation between a pastor and parishioner at the Port Morris church.   The parishioner had a part time job which brought her in contact with a number of small churches.  She told the pastor, the late Rev. Karen McMartin, of how she’d learned these churches each seemed have a different talent which they utilized to make their worship special, much like the Port Morris church had with its              acapella choir.  The other churches had liturgical dance, mime, chancel drama and bells.  McMartin noted that though the holiday season was many months off, she’d been thinking of having something special one Sunday in Advent.  She seemed to be thinking of asking one of the churches to share its talent.  Before she could say anything, the parishioner started to suggest asking them all!  It could be a nativity program.

However, not every church had nativity costumes.  Thus, it was decided not to use those but at the beginning of each year’s program, the audience was asked to use their imagination as each church performed its scene.  That tradition has been followed since then with only a few costumes being used now and then.  Also, that first year showed it was difficult to get churches from different areas to be able to rehearse at the same time. Thus, each church prepares its scene on its own with narration linking them together during the program.

“I am really looking forward to participating again in this year’s 20th anniversary of Port Morris United Methodist Church’s Christmas Through the Arts service in December. In past years, I have enjoyed this unique and creative ecumenical service which shares the Christmas story through a variety of performing arts with participants from many different churches…. A great memory was when our Stanhope UMC Jazz Trio performed in the service [ playing “We Three Kings”].  This year I will be performing with some of my instrumental music students from Bedminster. We are hoping to put together a jazz duet and a jazz trio. My students and I really enjoy performing together. Last spring, we were fortunate enough to put together a jazz quintet for Stanhope UMC Mardi Gras Jazzy Worship Service,” shared Scott Lefurge of Byram, a music teacher in the Bedminster school system and member of the Stanhope United Methodist Church.

The mix of talents can be different each year and different kinds of “gifts” having been offered, such as singing and signing in American Sign Language done by the St. James Episcopal Church.  However, one recent mainstay of the program has been Camille the camel.  An over-the-top diva, Camille is a puppet that helps introduce the audience to the program each year and would tell you that the camels with the wisemen were the most important part of the story.

In addition to coming together to tell the story, a sense of community and sharing has resulted from the program.  Jack Amato of Landing, known by many in the audience as the “piano man” attends St. Michael’s Roman Catholic Church in Netcong. Amato often brings friends who are singers with him, but also always does a piano solo for the program.  A participant for many years, Amato notes that he loves doing the program and,“I love working with all the other churches, especially Port Morris United Methodist Church.”  As a result of his connection with the program, Amato has also come to the Port Morris church to provide special music a few Sundays a year. Another example of sharing came from the director of the Abiding Peace Lutheran Church’s Messenger Dancers last year.  When they couldn’t attend the program, the director taught someone from another church a liturgical dance so the program would not go without one.

The participants, as well the as audience, look forward to coming together to share the nativity story with each other.  Katie Williver, of Oak Ridge, reflected on the program: “For the past five or six years I have been participating in the annual nativity program at Port Morris UMC. I have enjoyed participating because it has given me the opportunity to sing with my nieces and my son. Furthermore, it is such a beautiful program because people from all denominations come together to celebrate the birth of Christ. There are so many talented people involved in this nativity program; it is a beautiful night of music and storytelling.”