John Mika has seen a lot in his 100 years of life. His family recently gathered in November to celebrate their 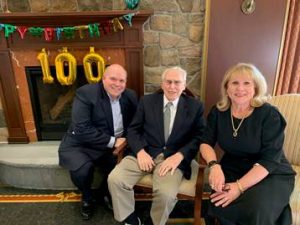 patriarch on his 100th birthday, and boy was it a celebration. Mika was born in Fall River, MA in Nov. 1919 and grew up in Brooklyn, New York as an only child. His first job as a teen was sewing lining for coats for 25 cents an hour in the garment district in New York City.

While his wife, Claire, passed away in 1993, Mika distinctly remembers how and where they met each other for the first time.

“When I first saw my wife as a young girl, I was playing handball and she would watch me with her sister at the window. On my 16th birthday, my mother told me I was going to marry her.” Mika shared.

When Claire and John married in September of 1942, a month later, John was drafted into the Army Air Corp. He spent 39 months making moves around the country and he became a radio communications expert.

While in Washington, DC, John received a radio engineering degree at Capitol Radio Engineering Institute.  His first job after the Army was with the National Bureau of Standards in Washington, DC.  He moved the family to Philadelphia and worked at the Philadelphia Naval Yard on control towers for airplanes and then transferred to Frankfort Arsenal in Philadelphia to work on proximity fuses and power supplies.  He decided to move to the midwest and leave government service and worked in private industry for Avco.  Over the years, he worked his way to become Vice President of Engineering and Manufacturing for the division.  With the downturn of defense spending in the 1970s, Avco closed the plant and John relocated to work for a defense contractor in New Jersey.  After a few years, John started his own company, Mika & Associates providing consulting expertise for various companies and worked with Picatinny Arsenal over the years.  John fully retired at the age of 75 and lived in Morris Plains before moving into Heath Village.

While John’s moving took him all over the country, once he and Claire had children (three girls), he took them to visit 42 different states, all by car. 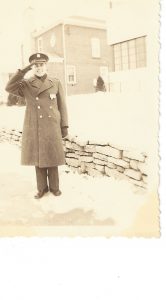 John also earned his private pilot’s license at the age of 51. He has also taken part in over 50 Catholic retreats over the years. He loves clocks and takes care of the grandfather clock at Heath Village today, a clock that is from 1720. When he has downtime, you can find him rooting on his beloved New York Giants, Notre Dame Fighting Irish, and Ohio State Buckeyes.

The day of the party was perfect. All of Mika’s family were present for the big event. Mika’s three daughters, four grandchildren, and six great grandchildren gathered around at Heath Village to enjoy appetizers, share photos, and celebrate John’s big milestone birthday by his side.

“The party was held at Heath Village with many residents attending.  There were hot hors d’oeuvres, cocktails and two cakes.  All of John’s family was in attendance.  There was a poster about what happened in 1919, decorations for the birthday and 100 years, a few pictures of key moments in John’s life, First Communion, Wedding, 25th wedding anniversary, 50th wedding anniversary, service picture, pilot picture and a picture of John in Patagonia with the penguins.  There was also a private dinner afterwards for the immediate family.” Denise Mika shared.

Over his 100 years, John has lived through many key moments in our nation’s history. He commented that he vividly remembers a few different dates.

“Pearl Harbor, I was in a bakery on the lower eastside, when I saw Sputnik flying over Washington, DC when I lived there, when President Kennedy got shot, and 9/11.”  Mika shared.

With 100 years of life experience under his belt, it’s no surprise that John has much to offer in the life advice department. He shares the following words of wisdom with the younger generation.

“Don’t get too upset over the small things, keep active, read the newspaper- keep learning, have a strong faith, and a good family life. Live within your means, education is important, and do what you like to do.”