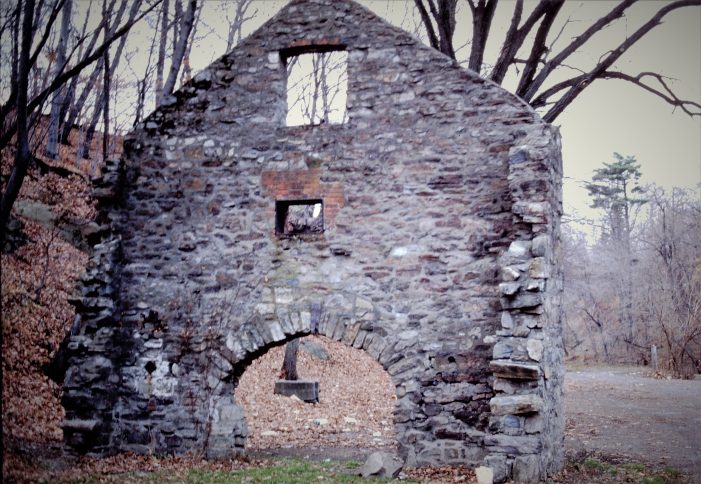 All that is left of the Iron works is this stone wall. The Iron Works is where the design and building of the engine and many of the S.S. Savannah parts took place. (Credit Henry M. Holden) 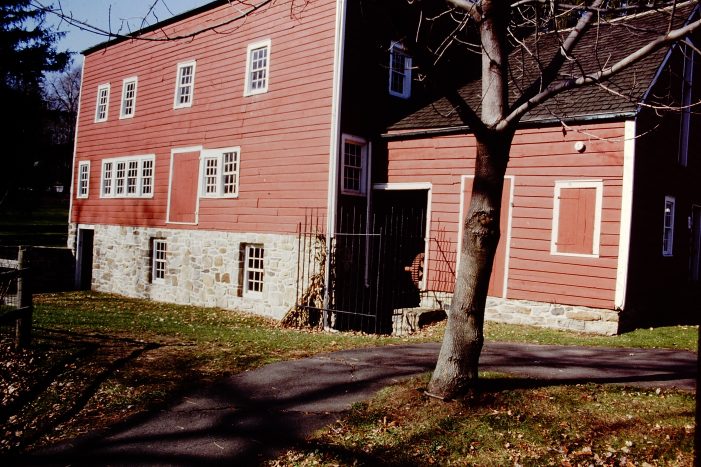 Upon close inspection one can see the gear of the grist mill that was added to the Factory Building around 1859. (Credit Henry M. Holden)

Speedwell Village, a National Historic Landmark is seven acres within Morristown. It has several 18th century buildings, some of which were moved to this site after being saved from demolition.

The most significant building in Historic Speedwell is the Factory Building. It was here that Alfred Vail worked with Samuel F.B. Morse to develop the electro-magnetic telegraph.

Morse and Vail first met in the fall of 1837. “Morse was demonstrating the telegraph to one of his colleagues at NYU, when Vail, who had been looking for Morse walked into the room,” said Maressa McFarlane, Head Educator at Speedwell Village. “At the time the telegraph was unreliable. By the end of the evening the two had become partners. The two men did significant work on the batteries and worked on developing a satisfactory wire to transmit the signals.”

“Eventually they purchased hatmaker’s wire and wrapped it with cotton thread to insulate it. They worked on the project together from the fall of 1837 through the winter and into January 1838.”

The first successful public demonstration of the telegraph occurred on January 11, 1838, in the Factory Building, which is considered “The Birthplace of the Telegraph.”

The perfection of the telegraph is considered the start of the telecommunications revolution.

The three floors of the Factory Building are hands-on, interactive exhibits that take you through the development of the telegraph and to its connections to modern telecommunications,” Said McFarlane.

“We have several exhibits that use turning a crank or pushing a button. You turn the crank and the original sender starts to operate sending a message to the receiver which reacts to the signals with lights or clicking noises.”

The Factory Building is also where the two men demonstrated the first use of the Morse-invented “Morse Code” specifically for the telegraph. Morse, was originally an accomplished portrait painter before becoming an inventor.

Initially, the Morse code, transmitted over the telegraph system, was recorded as marks on a piece of paper that the telegraph operator would then translate into English. However, it soon became apparent that the operators were able to hear and know the code just by listening to the clicking of the receiver, so the paper was replaced by a receiver that created more pronounced beeping sounds.

In 1843, Morse and Vail received government funding to test their telegraph system between Washington, D.C., and Baltimore, Maryland. On May 24, 1844, Morse sent Vail the historic first message: “What hath God wrought?”

The answer was the first step in transforming how people communicated and conducted business. Rather than taking weeks to be delivered by horseback or railroad, pieces of news could be exchanged between telegraph stations almost instantly. The telegraph also had a profound economic influence, allowing “money” to be transmitted across great distances.

By the end of the 19th century, new technologies began to appear, many of them based on the same principles as the telegraph. Eventually, these technologies would render the telegraph obsolete. The telegraph has since been replaced by the even more ubiquitous devices such as the mobile telephone, fax machine, and Internet, that have rendered the telegraph a museum piece. However, its invention stands as a milestone in the way the world communicates.

The Vail House offers a glimpse into the lives of the Vail family from 1844 to 1864. Fully renovated by Stephen Vail in 1844, the home has original furnishings, antiques, and portraits of Stephen and his wife, by Samuel F.B. Morse in 1837, and given to the Vail family as gifts.

Speedwell Village is also where the design and building of the engine and many of the S.S. Savannah parts took place.  The S.S. Savannah was the first steamship to cross the Atlantic in 1819.