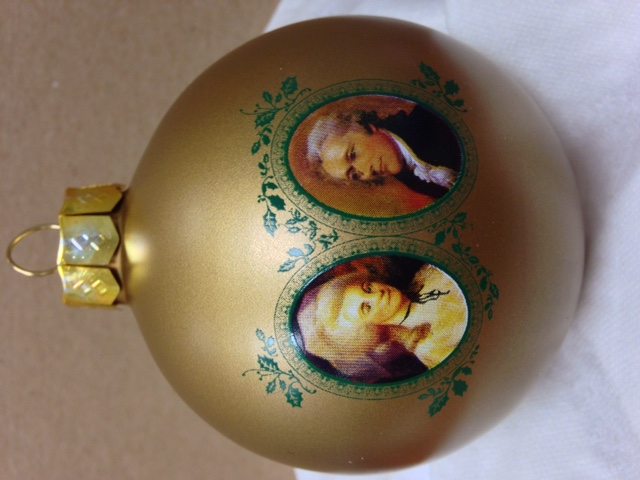 The Morris County Tourism Bureau announced its new ornament for the 2016 holiday season. The ornament celebrates Betsy Schuyler and Alexander Hamilton who met and courted in Morristown in 1780 when Betsy was a houseguest in a home that neighbored the Ford Mansion where Hamilton was billeted that spring. The name of this custom ornament is “Betsy Schuyler-Alexander Hamilton….A Match Made in Morristown.”
The gold and green ornament features portraits of Schuyler and Hamilton on the front, with text on the back of the ornament about their Morristown courtship. There is also a quote from one of Hamilton’s love letters to Betsy. Artist Erica Chinn, a Morristown High School graduate, was commissioned to design the new ornament.
The ornament is on sale now. A donation of $10 per ornament is required. Proceeds will support the work of the Tourism Bureau, the official destination marketing organization of Morris County. To reserve an ornament, call 973-631-5151. The Morris County Tourism Bureau office is in Morristown. For more information, consult morristourism.org.