I Remember Dad: God and Country 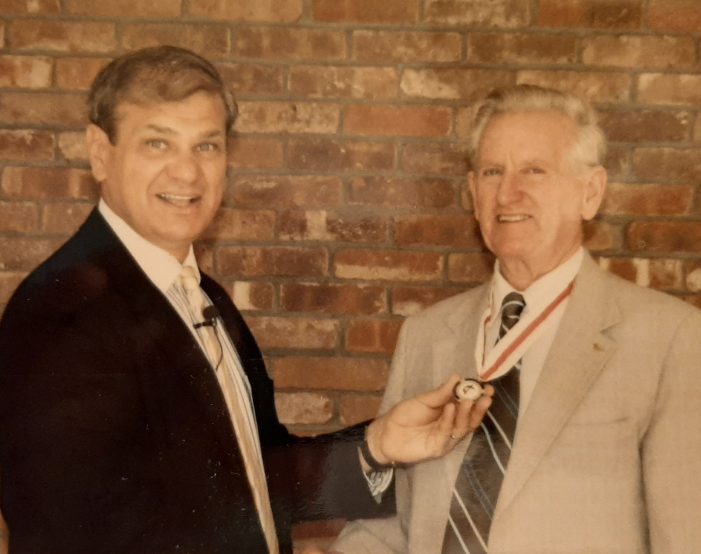 Some of the most endearing memories of my Dad are of the times when he served as a Sexton at the Boonton United Methodist Church. Dad loved his church. He dedicated over a decade of his life to cleaning and maintaining his beloved church.

Dad began serving as the Church Sexton in the Summer of 1981. At the time, Dad was still working as a long distance truck driver. Generally speaking, on Wednesday evenings after supper, Dad would climb into his little Ford Ranger pickup truck and drive off to the church to clean it. I often went with Dad.

I really don’t know how my father did it all. When he started working as a Sexton he was 53 years old. I would often see the fatigue in Dad’s eyes as he drove down Route 202, on his way to the church.

Dad would put in two to three hours of cleaning time on Wednesday nights. Then on Saturday mornings, he would get up early and eat breakfast. I often got up early on Saturday mornings, to help him clean the church. Right after breakfast we would make sandwiches. Then, throw in a couple of apples with a few oatmeal cookies in little brown bags. We would make tea and coffee at the church, for our lunch break.

When we got to the church, Dad and I would start vacuuming and scrubbing. I was always amazed at how hard my Dad worked. Dad was an incredibly hard working man. He truly loved his church. Dad did get paid for being the Church Sexton. I don’t think he reported to the Minister, even half of the hours he worked. It was Dad’s way of giving of himself to the Lord.

Dad retired as a long distance truck driver in June of 1989. To my amazement, Dad then devoted even more time to the cleaning and the upkeep of his church. Thus, donating a lot more hours of labor to the church.

Dad served as Sexton of the Boonton United Methodist Church till the Summer of 1992. His bout with prostate cancer, made it nearly impossible for him to carry on his duties as Church Sexton.

In the Spring of 1987, Reverend Leon Weaver presented Dad with the well earned God and Country Award. This is an award given by both the United Methodist Church and the Boy Scouts of America. Dad served as Scoutmaster of Boy Scout Troop 170 for over 25 years. Dad truly earned this prestigious award.

My memories of my Dad are very near and dear to my heart. I truly cherish them. Dad loved the Lord, he loved his family and he loved people. He had an uncanny belief in young people. Dad firmly believed that it was better to teach a boy morals than to rehabilitate a wayward man. I loved my father very much.