What draws us to the place we call home? Is there some inner calling, deep within the core of our heart centers, that draws us to a specific, pin-point place on the planet? My people were drawn to the land known as Peace Valley, by the Native Americans. They came to this place long before the Revolutionary War, in the early 1600’s. 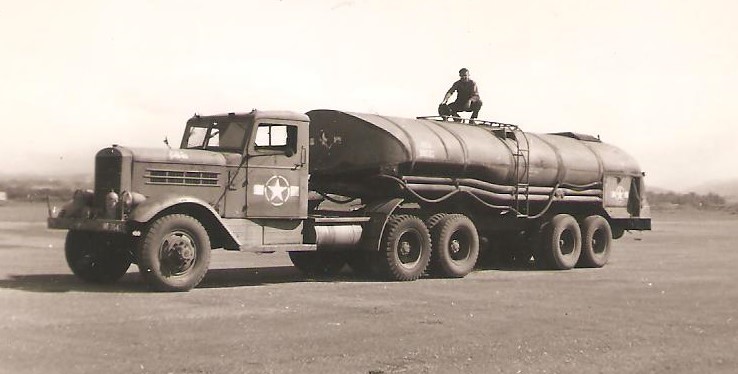 They sought the comfort of the foothills of Hook Mountain. The flowing waters of the Passaic and Pompton Rivers. This land, this parcel of land, of roughly seven square miles, was once known as Beavertown, before being named after the great president, Abraham Lincoln.

My father came into this world in the home that his father had built at the end of Mabey Lane. Dad grew up among the pine, the elm, the oak and the maple. He worked with his father at the family ice house, located along the old Morris Canal, just due east of Incline Plane Ten East.

But now my beloved father was in a strange place, halfway across the globe, living on an airfield in Hawaii. It is the Summer of 1943. Practically the entire world is at war. It’s been a full year now, that Dad has been in the U. S. Army Air Corps.

And as my Grandma Mabey prayed for her two sons, Edward and Richard, to be protected by the good Lord’s grace; Dad was climbing the ladders attached to long fuel tank-trucks, to fuel up the hundreds and hundreds of military planes that filled Hickam Air Field.

There comes a moment in time. A precious moment, it is. A lieutenant rode across Hickam Airfield. He watched this young private, climb the ladder to reach the top of the fuel truck. This lieutenant was watching my dad, working quickly and efficiently, almost with a cadence of overflowing enthusiasm that drew the attention of this young lieutenant.

The lieutenant asked his sergeant, who was driving the jeep, if he knew who this young, enthusiastic, hard-working private was. The sergeant simply answered the lieutenant, saying, “his name is Mabey.”

“Sergeant drive over to Mabey,” the lieutenant ordered.

The story goes that my dad climbed down from atop the fuel truck and saluted his sergeant and his lieutenant.

There was a kind of caustic tone in the lieutenant’s voice. But it was ever-so-slightly filled with a tinge of brotherhood. A brotherhood for the cause to win the war.

“Private, how would you like to work on the planes? Fix them up?”

The lieutenant then looked to his sergeant. “Sergeant have this private begin mechanic’s training, tomorrow morning.”

The lieutenant looked my dad in the eye. Then pointed to a nearby airplane hangar.

“Sergeant, let’s go,” the lieutenant commanded to his jeep driver.

My dad told me that story a few dozen times. Life is so funny at times. Miracles do happen. I doubt if that lieutenant had any idea why he told his sergeant to drive over to my dad that fateful mid-afternoon. I think the good Lord had something to do with it.