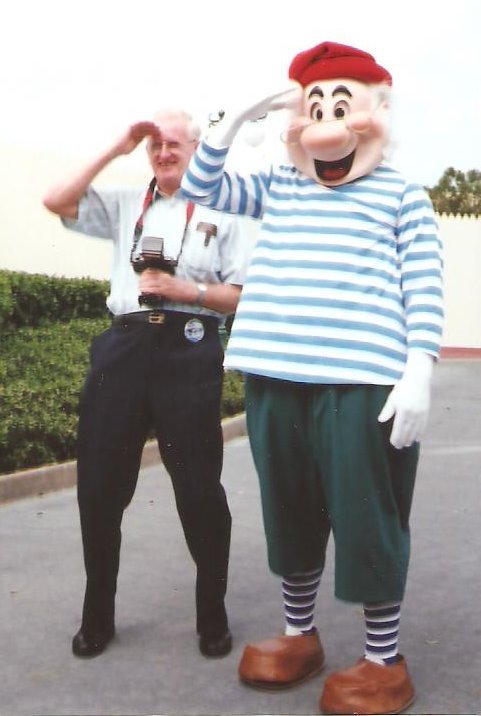 My father kept a part of his boyish spirit tucked into the chambers of his heart, all of his life. He saw opportunities for joy, splendor, fun and child-like wonder, in places where a thousand other people simply passed by or ignored the golden opportunity to bring a moment of joy and splendor to the lives of others.

One such classic example, came during one of our visits to Disney World in Florida. It was in the Summer of 1995 and Dad had just been diagnosed with prostate cancer. Dad was in the midst of radiation treatments. He asked his doctor if it would be okay to take four days to visit Disney World. Dad’s doctor gave my father the green light to go to Disney World. I remember that Dad told me that his doctor told him that it might do him a world of good to get away for a few days.

So, my mom and dad, my sister Patti and I visited Disney World for a few days. I remember this moment so very well. There was a person dressed in a cartoon-like character, pirate outfit. This pirate character wore a blue-striped shirt and a bright red hat. He was off to the side, away from the flow of people moving from one ride to another. He simply walked around in a small radius of about 10 feet. This pirate character would wave to people, salute them, or simply act silly.

Well, I think it would be safe to say that well over a thousand people passed by this pirate character. Many of them probably never even noticed the pirate’s silly antics. Some did see the pirate, but just simply glanced over for a second or two and then carried on, briskly walking to the next amusement ride. Some did stop for a moment to wave at the funny, pirate character.

Well, within a few seconds a small crowd gathered in front of Dad and the pirate character. They began saluting back to Dad and the pirate character. Children stopped, stood at attention and saluted the pirate and his newly adopted assistant. Then, the parents of the children joined in. Smiles abounded. Laughter began filling the air. People suddenly stopped their mad dash to the next ride and found joy, wonder, laughter and splendor in the moment.

My father had the uncanny gift to find joy and upliftment in the simplest things of life. To some extent, for those few minutes, my dad’s childlike joy even brought a certain joy to the pirate character himself.

I try my best to emulate my father’s love for life. To bring joy and happiness to others. In these days of political differences and highly opinionated perspectives, it is not easy. But from time to time, I think of how my dad could take the simplest things in life and breathe a certain joy into them.

From serving as a Scoutmaster, to his work as a long-distance truck driver, to his later-life service a crossing guard, Dad found splendor and joy in places where all so many people would simply walk past.