I Remember Dad: Sacred Be Thy Holy Bible 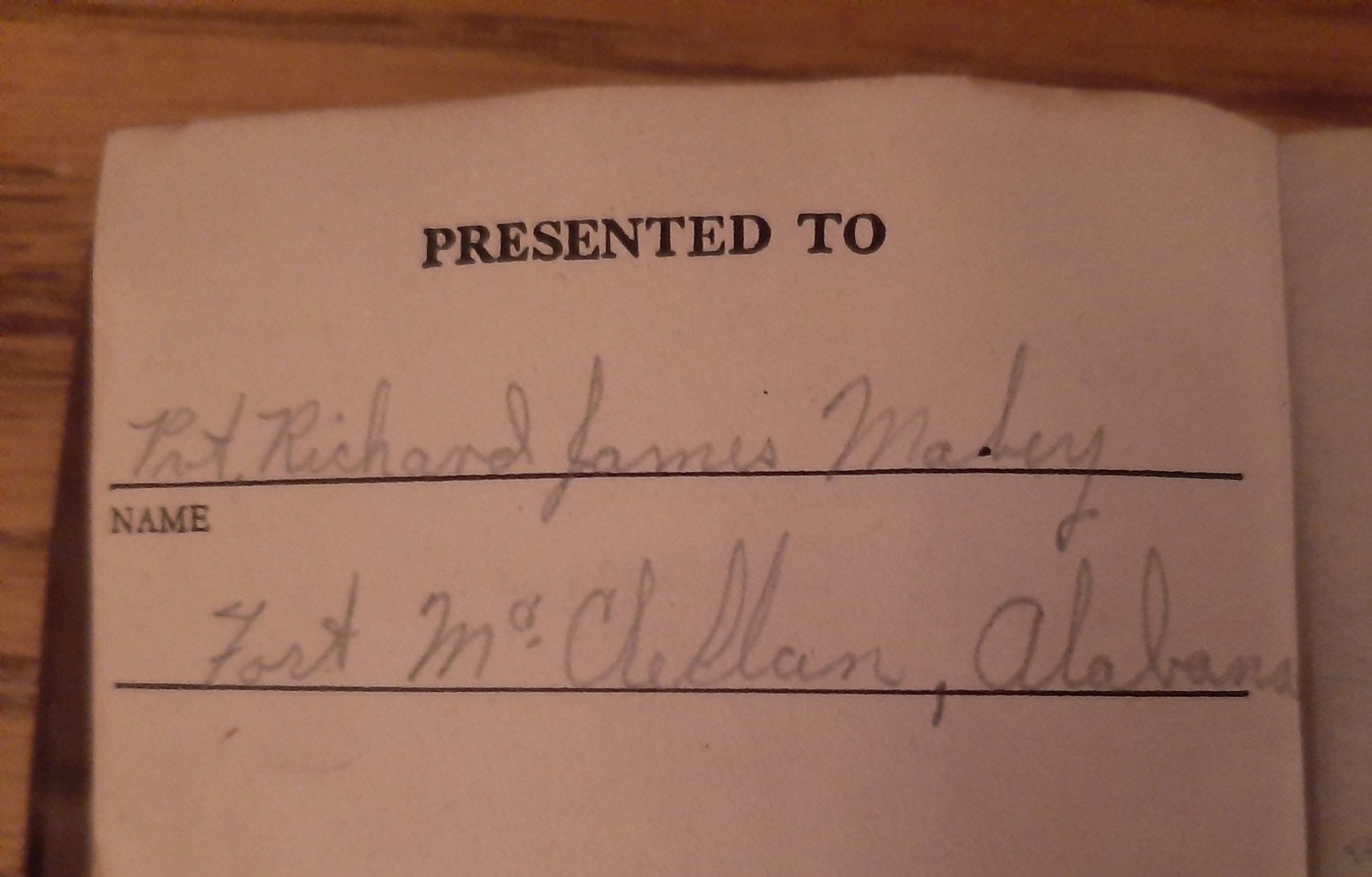 I hold my father’s Holy Bible with sacred trust. This the very same Holy Bible that my dad carried with him all throughout his time of service in the Seventh Army Air Corps, during the Second World War. It is a pocket-size Bible. Dad wrote his name on the inside of this Bible, when he was going through basic training at Fort McClellan in Anniston, Alabama.

The church that my dad most likely attended at Fort McClellan is still standing. From looking at pictures of it, as it looks now, it has a most eerie and haunting quality. It stirs my imagination that my dad stepped into this church, at the age of 17, when he was enduring his eight weeks of basic training at this landmark army base.

After Dad completed his basic training, he was given a time of a short leave to return home to Lincoln Park, to spend a few days with his family. During his leave, he brought his pocket-size Holy Bible with him. On the one and only Sunday that he had on his time of leave, he visited his brother Earl and Earl’s wife, Eleanor, for lunch. Before lunch, Uncle Earl and Dad took a walk outside across the front lawn. It was then that my dad saw my mom for the first time. She was sitting on the rock wall in front of her house, just across the street from Uncle Earl’s home on Boonton Avenue in Boonton.

My dad often told this story to my sister, Patti, and I. He told how he read his little Bible every chance he got, when he was home on that short leave. For Dad really did not know, at that point in time, where he was destined to be sent. He often confided in me that yes, he was a bit frightened, but he was proud to serve his country.

When Dad was flown to Hickam Air Field, in Hawaii, he told me that he read his little Bible every night before going to sleep. There were rumors that the Japanese were planning another air attack upon Pearl Harbor and neighboring Hickam Field. Dad told me that every night, after he read his Bible, he earnestly prayed that peace would remain at Pearl Harbor and Hickam Air Field.

Sometimes, when I hold my father’s Bible, that he read at Fort McClellan and then at Hickam Air Field, the tears fall down my cheeks. At best, I can only conjure up some idea of what my dad went through at age 18. When I was 18, I was attending college, dating my old girlfriend Penny, and my biggest fear was not being able to get a good grade in Biology class.

My father worked on airplanes at Hickam Air Field. Specifically, the P-51 Mustang Fighter Plane. Mostly, he changed the spark plugs on these mighty little fighting planes. Dad always called them “knuckle busters” because there was such little room to work in, on the engine of the old P-51.

Now, at 67, I hold my father’s little Holy Bible with earnest reverence. I so dearly cherish my father’s Bible. The golden truth of the sacred scripture gave my father the courage and the strength to see through some tough times, both at Fort McClellan and Hickam Air Field. For, truly, it was not a bed of roses.

Whatever religion you hold to your heart, be faithful to the sacred scriptures of that faith. Try your very best to read even just a few passages every day. Sacred writings are a great source of inspiration and inner strength. Hold true to the sacred writings of your faith.