I Remember Dad: The Front Page 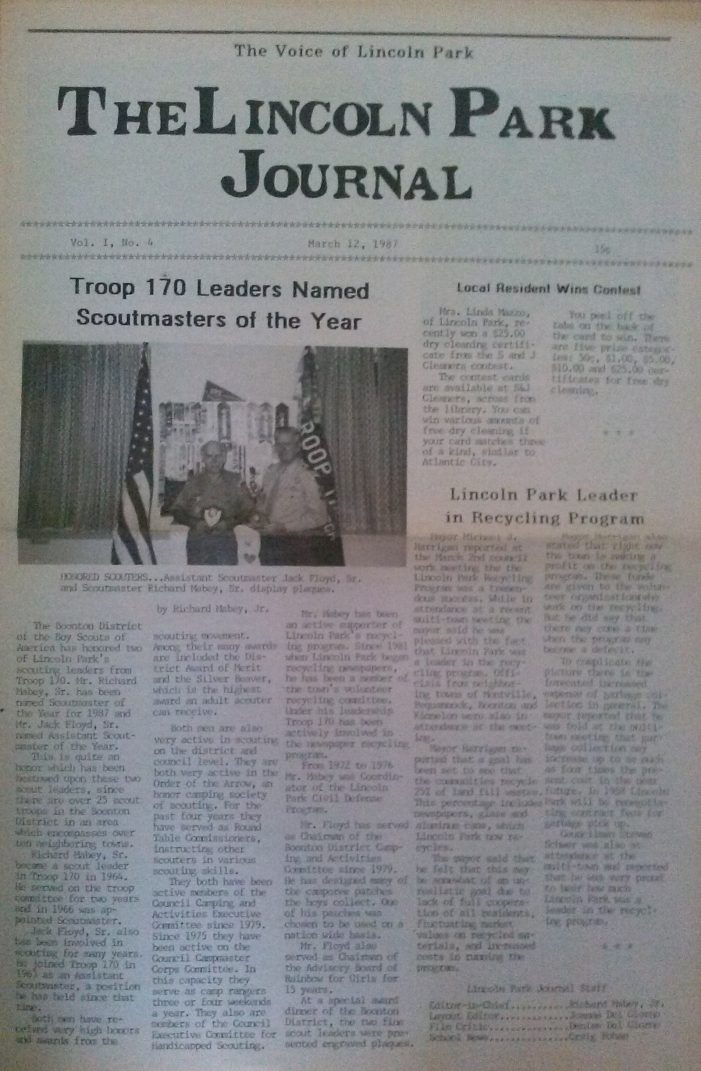 My front-page story, from the pages of the old Lincoln Park Journal, that told of my dad and Jack Floyd receiving the coveted Scoutmasters of the Year Awards. 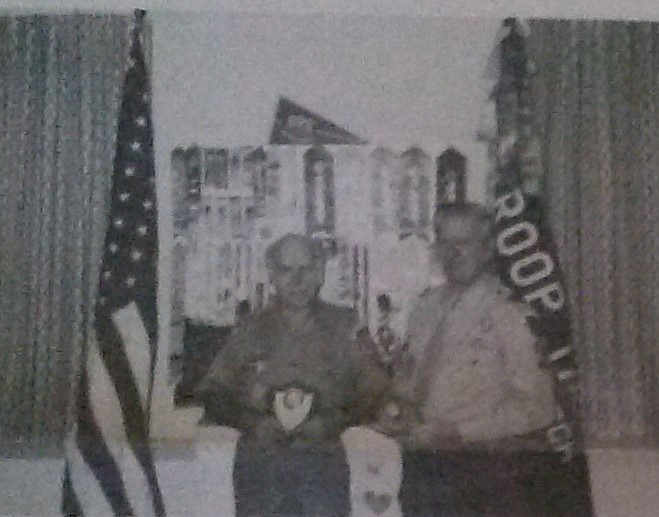 Dad and Jack showing their Scoutmasters of the Year Awards. The quality of this photo is blurred, regretfully the original was lost in time.

One of the greatest honors that was ever bestowed upon me, was when I was presented the golden opportunity to write the front page story for the old Lincoln Park Journal about my dad and Jack Floyd receiving the Scoutmasters of they Year Award. This was back in early 1987. Dad received the Scoutmaster of the Year for the Boonton District. And Jack Floyd received the Assistant Scoutmaster of the Year Award for the Boonton District.

I was the one who took the picture of my dad and Jack Floyd standing in front of the “Scout Awards Wall” of Saint Andrew’s Episcopal Church’s Thorpe Hall. It is a most strange and bewildering thing, because I was the very person who created the Scout Awards Wall, back in the Summer of 1969, when I painted Thorpe Hall for my Eagle Scout Project.

Dad and Jack were as close as brothers. After Jack’s first wife passed away, Jack remarried quite a few years later. Jack asked Dad to be his Best Man when he and Lee married. My dad was deeply honored.

Jack was like an adopted uncle to me. Dad, Jack and I, and the scouts of Boy Scout Troop 170 shared 10,000 memories together. We went on several week-long, rugged hikes of the Appalachian Trail. We went on dozens and dozens of scout campouts. We survived the rapids of the Delaware River on quite a few, week-long canoe trips.

When I received my Eagle Scout, Dad told me that he just wanted to be my dad and not my Scoutmaster for the important event. So, I asked Jack to honor me, by presenting my Eagle Scout medal to me. Jack told me that he was honored that I asked him. And, I hold the historic record in Boy Scout Troop 170 of being the only scout to have received the highest rank of scouting from Assistant Scoutmaster Jack Floyd.

Both Dad and Jack lost their battles with cancer. At times, I can feel their spiritual presence so strong. When I am faced with making a hard decision, going through rough times, or just struggling with my writing; I can hear the gentle echo of both Dad and Jack’s voices sharing words of assurance with me.

In so many ways, I have been very blessed to have had so many positive role models in my life. Things were not always honey and roses. There were times when I had to learn the hard lessons of being disciplined.

Like when I got a D on my first chemistry test in high school. Dad’s answer to the problem was very simple. “Richie, you need to study more,” was all Dad said about the subject. And, my father was right, he was all so very right. I really had not put my best foot forward in chemistry class. I am glad to say that I earned a B as my final year-end grade in that chemistry class.

I think that love is the key that unlocks the door to most every problem that we could ever face in life. Love melts away the ugly wall of prejudice. Love inspires. Love can take us to another dimension, to find hidden talents sleeping deep within our inner selves. For love truly is the key to life.