I Remember Dad: The Miracle 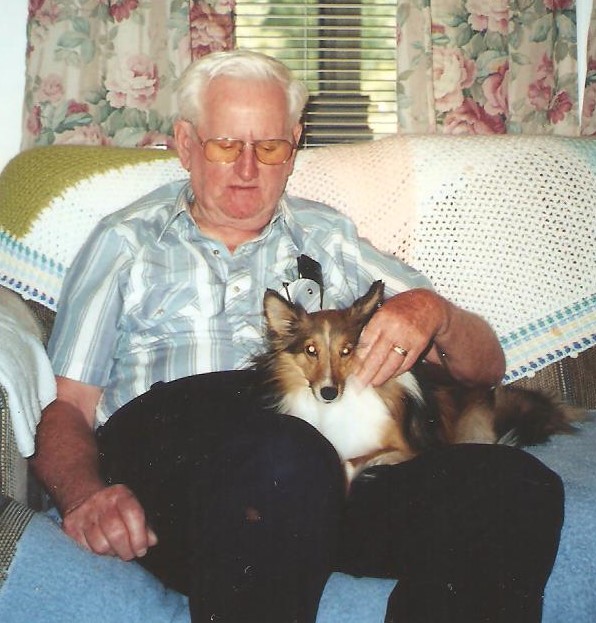 In the early Summer of Year 2000, my sister Patti adopted a cute little Shetland Sheepdog from the Rescue Sheltie organization. Foxy was very frail, very frightened of people, very shy and would spend day and night hidden behind the living room couch. She was as cute as any puppy that you ever saw. But she deeply feared people. We would bring her food to her, behind the couch, every morning and evening.

Then, in the Autumn of Year 2000, my dad was diagnosed with kidney cancer in his right kidney. It was in late November of that year that Dad’s doctor gave him the sad news that his right kidney needed to be removed. About two months before my mom went Home to be with the Lord, Mom told me that Dad so very much dreaded the thought of that operation.

Mom also told me that Dad would spend his afternoons, sitting on the living room couch, in quiet solitude, contemplating his upcoming operation of having his right kidney removed. At the time, I was working in the Editorial Department of a large advertising agency. My sister Patti was serving as a Pastor in a Reformed Church in Bergen County. So, neither one of us had the time, during the day, to minister to Dad’s anxieties and fears of his upcoming surgery.

As Mom and I talked at our dining room table in our home in Florida, about two months before Mom passed away, my mother told me of the miracle that she witnessed before her. Mom told me that she was working on one of her craft projects, in the living room. Dad was sitting on the couch, with his Bible open, but not really reading the Bible. All of a sudden, Foxy came out from behind the couch. She jumped onto the couch beside my father and sat upon my father’s lap.

My mom told me that it was as if the good Lord brought Foxy into our home, so that my dad and Foxy could minister to each other, in a way that was beyond words. Mom told me that all through the month of December of Year 2000, Dad would sit on the couch, thinking about his upcoming operation that had been set for early January. And, Foxy would jump on the couch and onto my father’s lap. The two would spend their mornings together and then after lunch, spend the afternoon, ministering to each other.

When my sister took Foxy out of the canvas bag that she had carried Foxy into the hospital in, Foxy quickly hopped to my father’s side and began wagging her tail with abounding joy and happiness.

Sadly, we lost my father to pancreatic cancer in May of 2006. Foxy lost her own fight with liver disease in March of 2015. I am sure that somewhere in the vast fields of Heaven, Dad and Foxy are walking together in a beautiful, open field. Perhaps, resting upon green grass, bringing joy and comfort to each other’s hearts.