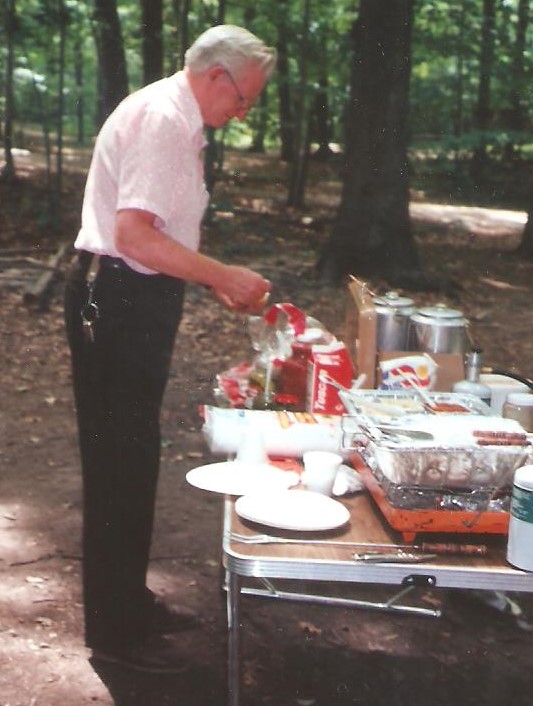 From the time I was six years old, I remember all through the Spring, Summer and early Fall, there always being two or three picnics a month in the big open field behind my house. The back field was well over an acre in size. It was the very land where my Great Uncle Earl had planned to build a home for himself and his beloved, when he came home from World War I. Sadly, Great Uncle Earl was killed in battle in France.

There was a big, tall crab apple tree in the southeast corner of Earl’s Meadow. My Grandpa Mabey would sit beneath the old tree apple on his favorite rocking chair. Grandpa would eat the crab apples while one of his eight sons would be cooking the hot dogs and hamburgers. Grandma would get so upset at Grandpa for eating the crab apples.

In May of 1968, my grandfather went Home to be with the Lord. My Dad, as a tribute to his beloved father, kept the tradition of the Saturday afternoon picnics alive and well. I remember that Grandpa asked Dad to keep the picnic tradition alive, just a few weeks before Grandpa journeyed to Heaven’s Gate.

My father thoroughly loved the Saturday afternoon picnics. Dad would call his mother on a Wednesday evening and ask her to tell all his brothers that there would be a picnic Saturday at Earl’s Meadow. Grandma lived just down the road from us, on Route 202 with her daughter Violet. My Aunt Violet owned the infamous Towaco Hill Kennel.

To this day, I don’t know how the word got out. But there would be at least 50 people at Dad’s Saturday picnics at Earl’s Meadow. It was the perfect setting for a picnic. To the east was a most beautiful, scenic woods filled with maples, elms, oaks and pines. To the north stood the very home that Grandpa built when he was a young man. To the west was a bountiful cluster of maples and oaks that bordered Mabey Lane. And up the sloped hill, to the north stood the old Mabey Homestead, the very home I grew up in.

My dad was the fifth of nine children. My mom was the nineth of nine children. So, along with my grandparents, my aunts and uncles and my cousins; the nine or ten long, folding tables would be filled with family, church members, friends and neighbors. It was a joyous time, a wonderful time, a time overflowing with warmth and care.

The food table would be set up like a buffet. There would be big bowls of potato salad, macaroni salad, cole slaw, baked beans, and potato chips all lined up on the long food table. Dad, or one of his brothers, would cook hamburgers and hot dogs on the old-fashioned charcoal grill. Often times, I remember that there would be two grills, one lined with hot dogs, the other filled with hamburgers cooking.

It was truly the golden era of innocence. Mostly everyone still had only one black and white television in their home, a radio on the kitchen cabinet and maybe a stereophonic victrola in a corner of one of the rooms in the home. That was the full extent of technological communication with the outside world. There were no microwave ovens, juicers, food processors in the kitchens. In the kitchen was simply a stove and an oven for cooking purposes.

I so very much miss those precious and endearing Saturday afternoon picnics. Now, living in Florida, I hardly ever see my cousins. Sadly, my parents and grandparents have passed away, along with most of my aunts and uncles. In memory, I return to Earl’s Meadow and reflect upon those glorious times. It was a simpler time. As my good friend, Joe Manicone coined it, it was truly the romantic era.

One Response to "I Remember Dad: The Old Saturday Afternoon Picnics"