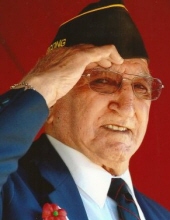 Joseph (Joe) Anthony De Lois, 95, of Youngsville, N.C., passed away peacefully in his home just after midnight on January 24th. He was surrounded by love.

Joseph was born in Binghamton, NY on December 5, 1924 the son of Anthony and Antoinette De Lousia. He was predeceased by five sisters, Josephine, Rose, Julia, Elizabeth and Lucy his brother, Dominic and his daughter, Anita.

At the age of 16 Joe enlisted in the Navy. On December 7, 1941 he found himself right in the middle of the attack on Pearl Harbor at the age of 17. After the war he received an appointment as a police officer for the city of Binghamton, NY. When the Korean War broke out he was called to active duty again where he enlisted in the US Army. He left active service in 1958 but continued as First Sergeant in the National Guard Tank Company, part of the 44th Division, a position he held until he retired in 1984. Joseph served his country in uniform for 43 years.