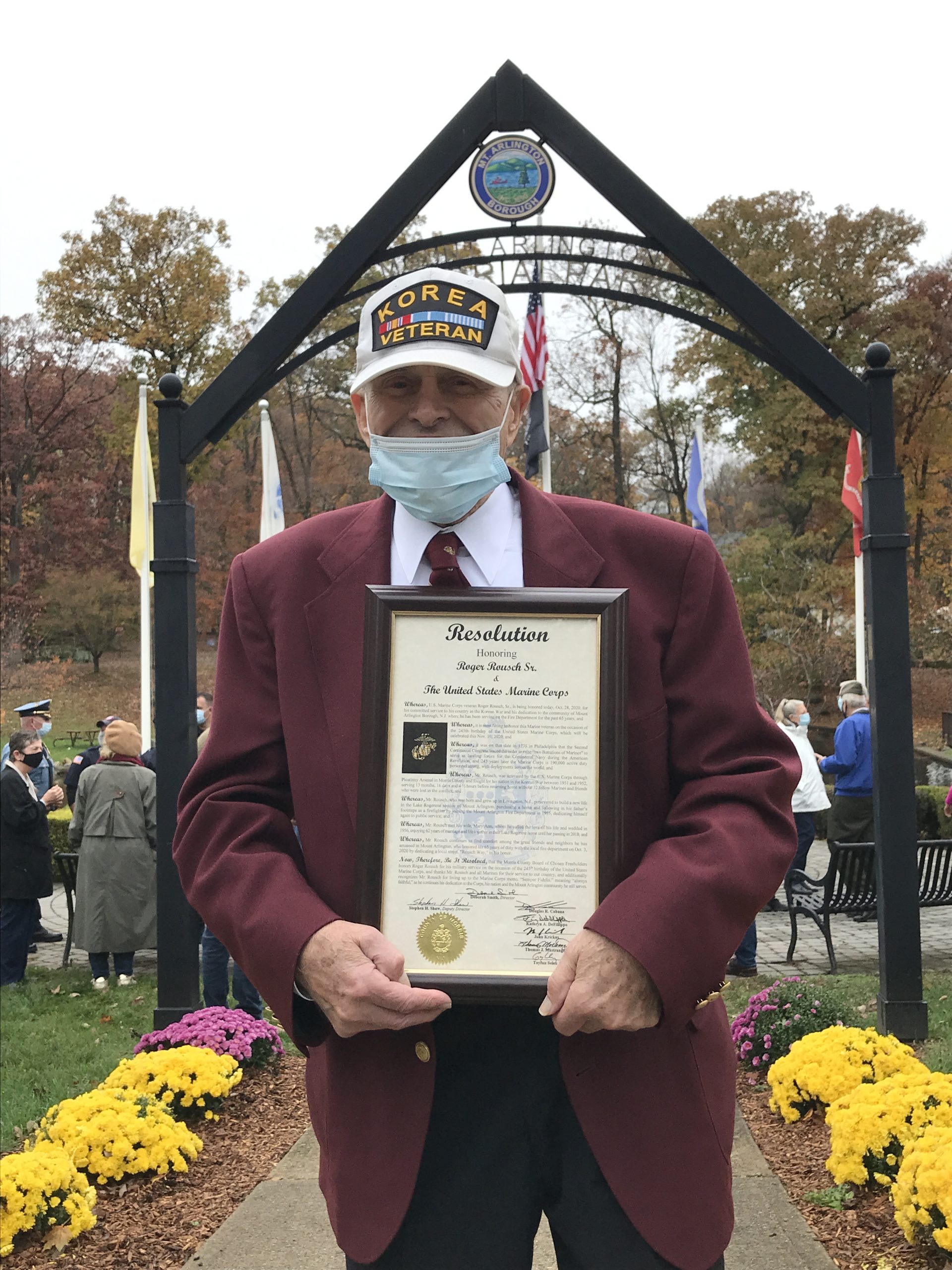 The 89-year-old veteran was presented with an official Morris County resolution honoring his military and public service at Memorial Park in Mt. Arlington, where Mayor Michael Stanzilis and a contingent of firefighters, police and residents also joined him.

“Mr. Rousch, you served honorably in the Korean War and endured the loss of many fellow Marines and friends. Yet, you did not lose your fighting spirit or optimism,” Freeholder Director Deborah Smith said at the ceremony. “You established a new life in Mt. Arlington and you continued to dedicate yourself to public service. You have spent 65 years on the Mt. Arlington Fire Department – 65 years and counting – and with this resolution, we thank you.”

Mr. Rousch, who grew up in Livingston, was activated by the U.S. Marine Corps through Picatinny Arsenal in Morris County and served in the Korean War between 1951 and 1952.  As he explains it, he spent 13 months, 16 days and 4 ½ hours before returning home, leaving behind 32 fellow Marines and friends who were lost in the conflict.

“I watched the planes come in once to shoot up the hills, and I didn’t want to get anywhere near it,” he somberly recalled of his experience.

When he returned, he created a new life in the Lake Rogerene

section of Mt. Arlington, purchasing a home and following in his father’s footsteps as a firefighter by joining the Mt. Arlington Fire Department in 1955 – dedicating himself again to public service. He met his wife, Mary Ann, whom he called the love of his life, and they wedded in 1956. The couple enjoyed 62 years of marriage and life together until her death in 2018.

“I had a great wife and a great life. She grew up in Livingston too. It took her a while to break-in Lake Rogerene, but she did,” Rousch said, while also talking of his son, Roger Jr., who lives in nearby Byram Township, and his grandchildren.

Freeholder John Krickus, a fellow Marine, read the resolution during the ceremony, noting Rousch was being honored in conjunction with the 245th birthday of the United States Marine Corps, which will be celebrated this Nov. 10, 2020.

“It was on that date in 1775 in Philadelphia that the Second Continental Congress issued the order to raise “two Battalions of Marines” to serve as landing forces for the Continental Navy during the American Revolution,” Krickus said, before saluting Rousch.

Rousch also was recently honored by Mt. Arlington for his 65 years on the local fire department. They dedicated a street in his name on Oct. 3.

“Roger is one of our great citizens and veterans, and it really means a lot to us to have him here and to have the Morris County freeholders come up here to honor him,” said Mayor Stanzilis. “Guys like Roger are what make this nation great, and we’re glad to have him here in Mt. Arlington.”