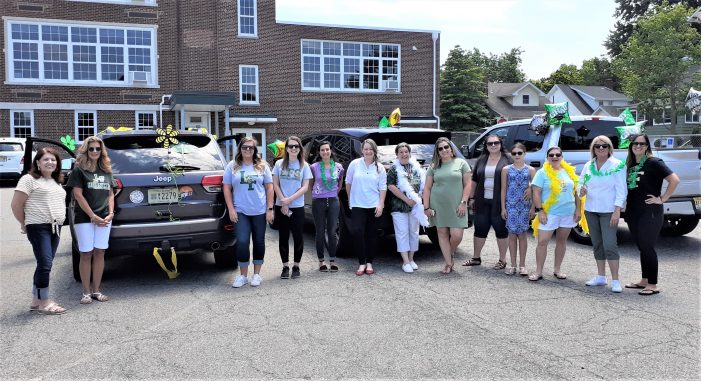 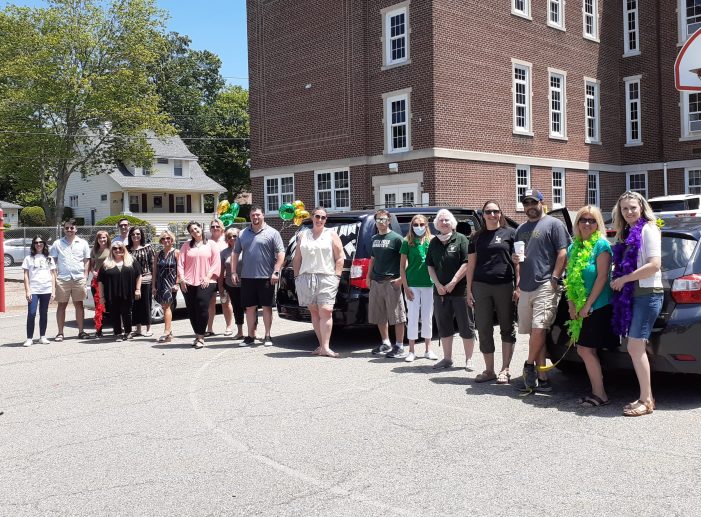 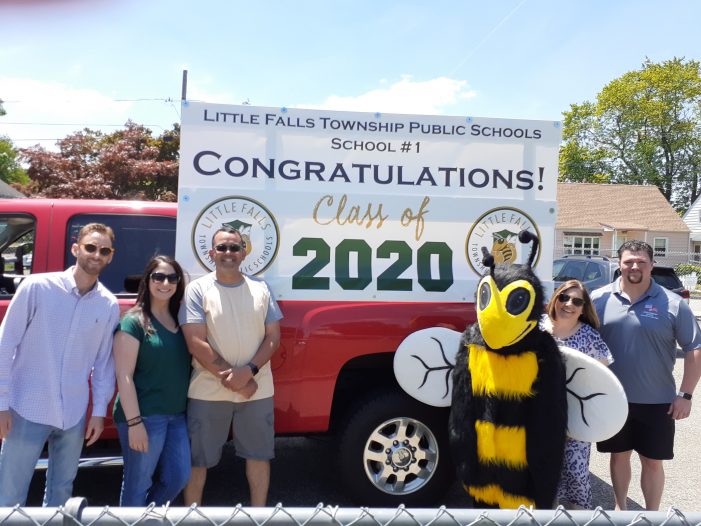 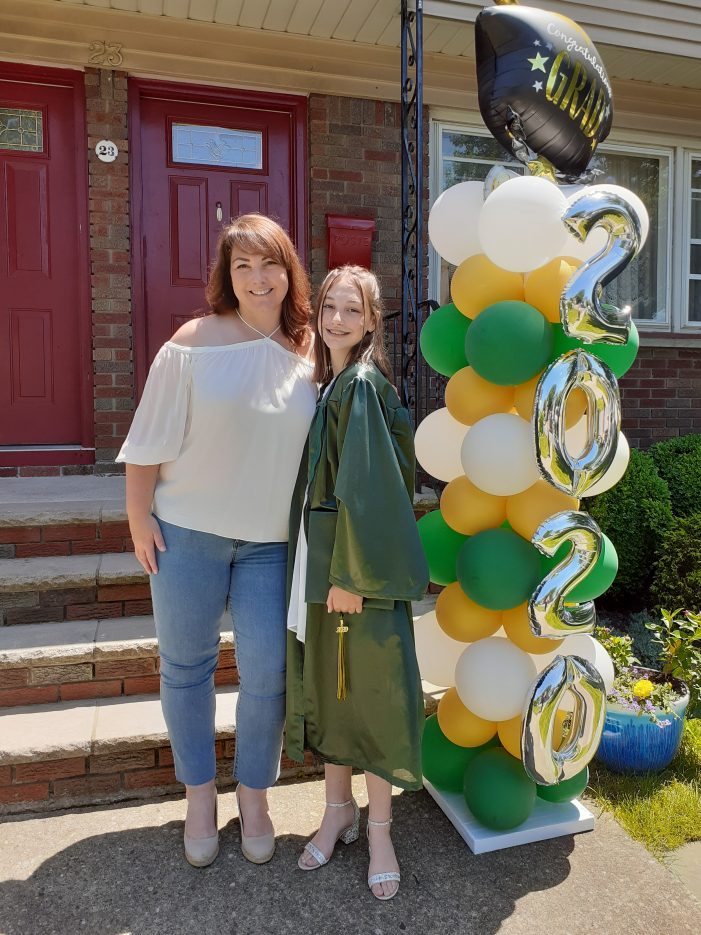 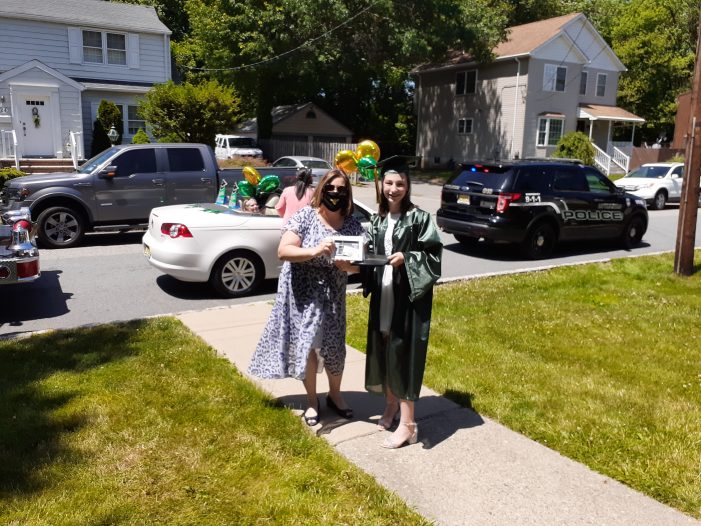 The Little Falls Township Public School District held a graduation ceremony for its eighth grade graduation class on June 16, that was moving in both the literal and figurative sense. Due to state restrictions on the size of gatherings due to the coronavirus pandemic, a traditional ceremony was not allowed, so a drive-thru motorcade celebration was conducted for this year’s commencement.

Under sunny skies, educators, administrators, staff, and parents from the district came together in the parking lot of School No. 3, which houses third and fourth grades, to dress up their vehicles with the school district’s colors. With an upbeat attitude, the atmosphere was positive as they proceeded to line up their decorated vehicles for the parade in order to give a special send-off for those in the Class of 2020.

The festivities kicked off as the students were invited to watch the graduation video on YouTube with their friends and families that included a photo montage of the class set to the “Pomp and Circumstance” graduation march theme performed by music teacher Owen Davitt, who played eight different instruments in a symphony. Also featured in the video were speeches from students, elected officials, and school administrators.  Choral Director Matthew Schmidt oversaw the student choir performing the National Anthem. The Pledge of Allegiance was open to any eighth grader who wanted to take part in the video.  The graduates, along with their family and friends, were able to watch the video prior to the drive-thru ceremony. The graduates were also shown saying thank you to the school district to show their appreciation in the video.

The event was a group effort led by Superintendent Tracey Marinelli who brought in help from district staff, 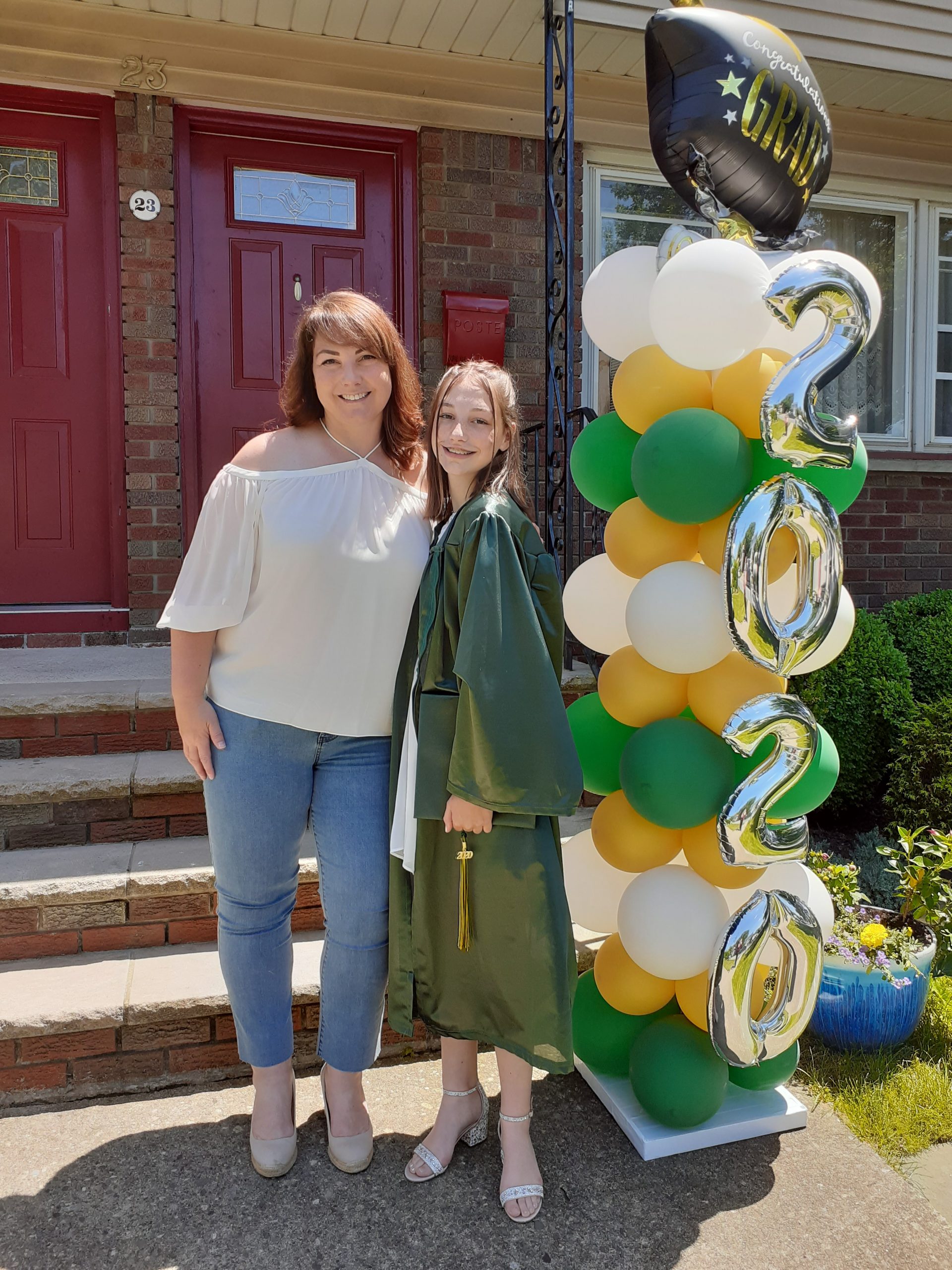 administrators, parents and township residents to make the day a success. Councilman Al Kahwaty put together the video with contributions from students and teachers. Mike Schiff from the Little Falls Education Foundation drove his convertible in the parade with the Little Falls Hornet mascot, and local resident Steve Baskinger donated his time driving the fire engine truck.

At the start of the parade, Marinelli declared “Let the motorcade begin!” and the vehicles set out on their four-hour journey to the students’ individual homes.  The vehicles lined-up to greet the graduates as they wore their caps and gowns in front of their homes, where their diplomas were handed to them by first-year principal Dana Sprague, along with a fanfare send-off. Confetti bombs were triggered by eighth grade advisors James Delfino and Vincent Plateroti from the top of the Fire Party Patrol fire engine truck as the graduates accepted their diplomas. Pencilworks Studio donated s pencil-drawn picture of the School No. 1 sign that Marinelli had framed and hand delivered to each graduate, along with their diploma, as a graduation favor. Earlier in the day, the graduates also had the opportunity to take formal pictures in front of School No. 1, which houses fifth through eighth grades. by the district’s art and photography teacher, Kelly Henneberry.

According to Marinelli, the district aimed to create as many special moment as possible for the graduates. One of those special moments was to have celebrities sending personalized video messages featured in the graduation video. 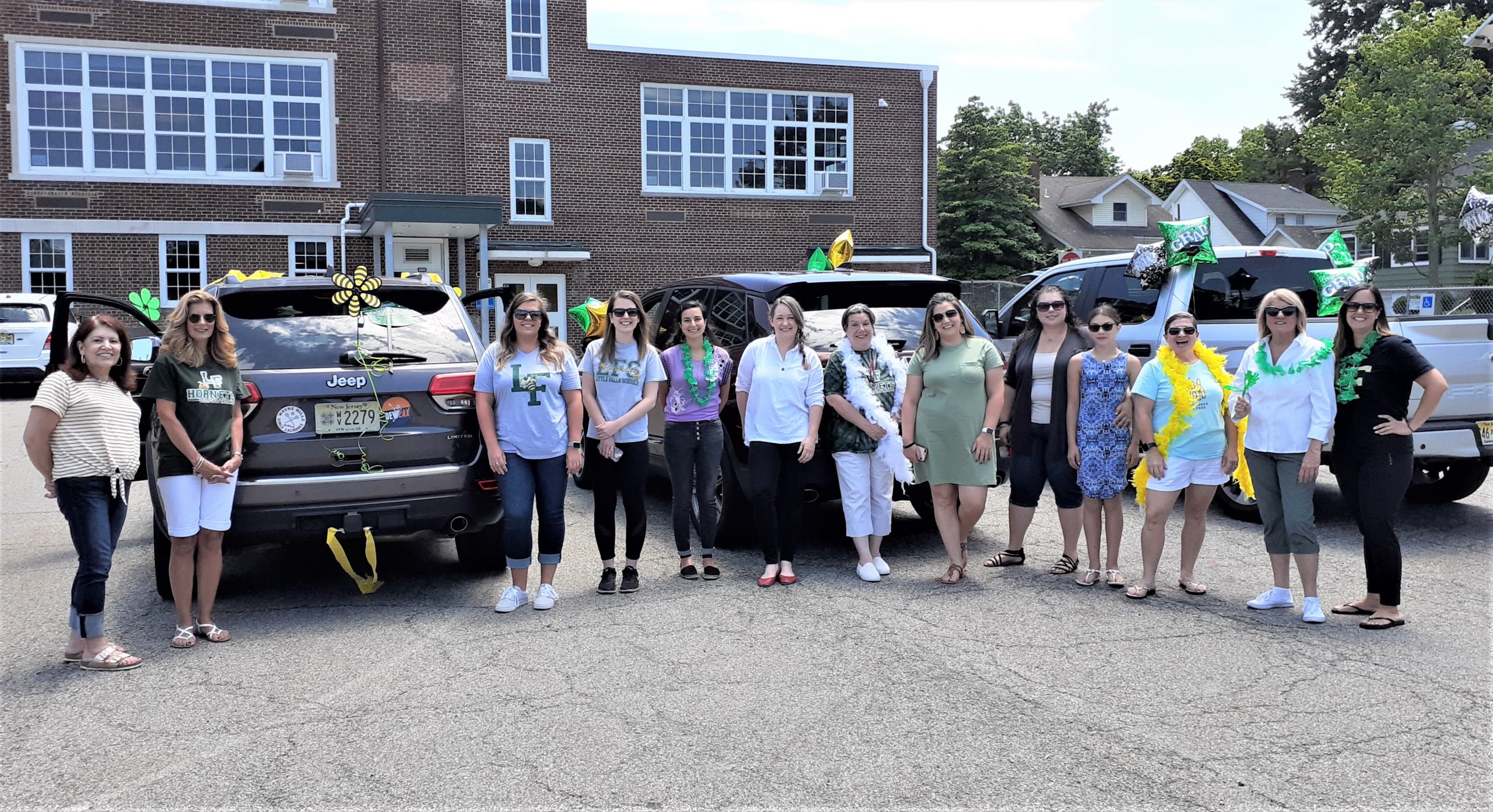 “We have approximately 27 video messages from famous people and politicians, completely personalized for our district, that was included in the graduation video,” Marinelli said. “A bunch of us jumped on the computer and into Twitter and Instagram accounts to ask these celebrities. They were more than willing to do the messages. It was really exciting and overwhelming.”

The video messages were released each week and every day this week, Marinelli added.

“It was really emotional to see the video,” Marinelli noted. “Our motto this year is ‘Everyone Counts.'”

Marinelli also said giving the graduates some happy memories, after they finished off the year in an unconventional way, was the goal of district. They took into into account the last few months of what would be their final days in the district that consisted of being quarantined and participating in remote learning. She said she also feels a special connection with the Class of 2020.

“I knew this was going to be an emotional graduation for everyone, but it’s especially emotional for me,” she explained. “These kids were in fourth grade when I first came onboard as district superintendent and as principal at School No. 3. We all wish them the best of luck and hope they can have special memories of their graduation to look back on.”

Councilwoman Tanya Seber, whose daughter Amy is an eighth grade graduate, said the ceremony was heartwarming and was very personalized, unlike a traditional graduation ceremony.

“It was so personal and touching. The Little Falls School District made it very personalized with this parade,” she said. “My family and friends really enjoyed the experience. It moved me to tears.”

Seber’s daughter Amy, 14, said she and her fellow graduates were very happy with the district’s efforts to make the ceremony special. She will be entering Passaic Valley High School this fall as a freshman. 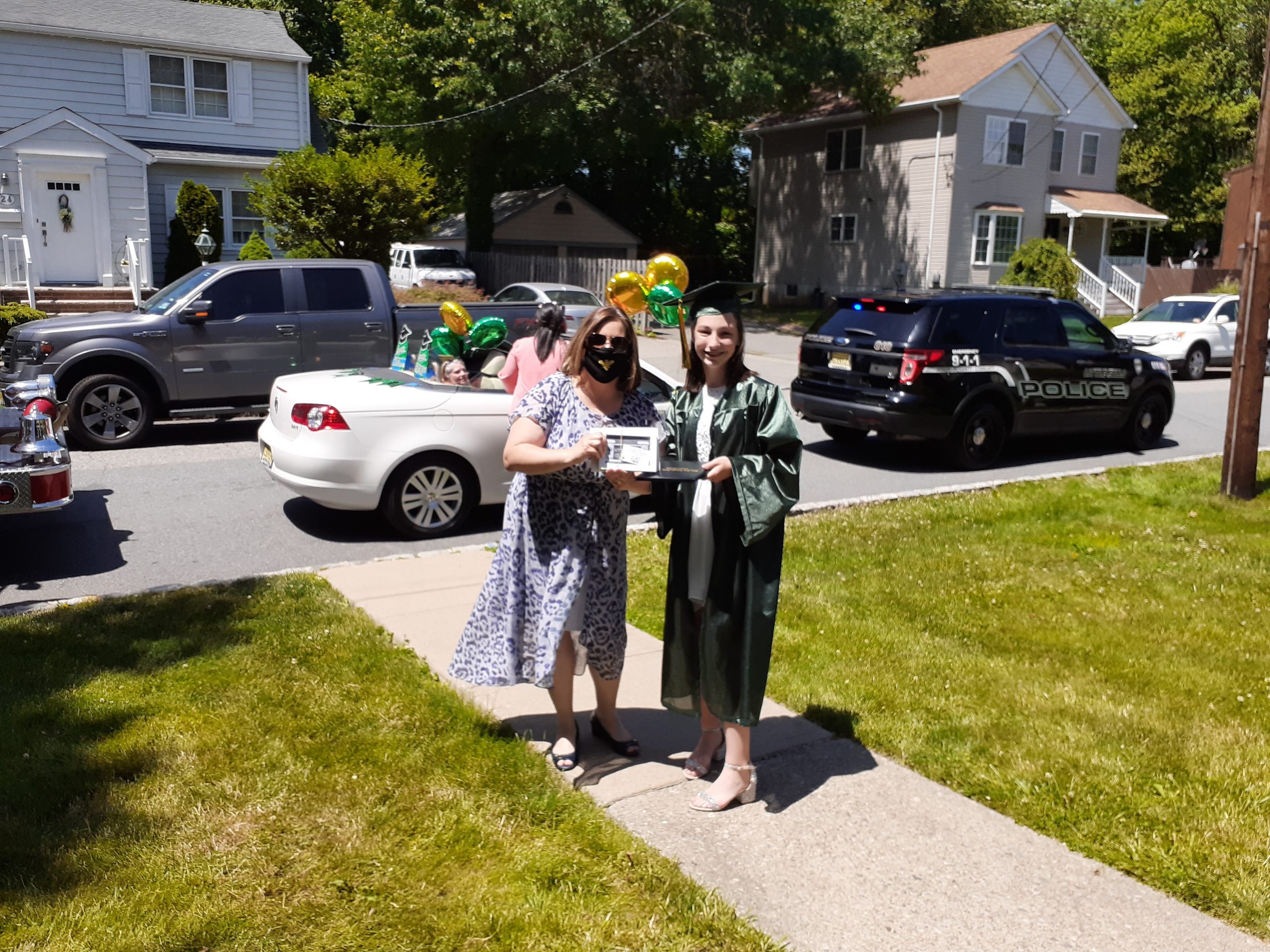 all of us,” Amy explained. “It wasn’t a whole group celebration like traditionally, but instead was individualized. This will be very memorable for us.”

“I feel very ready overall, attending in-person or online,” she added. “I feel confident going into PV,  I do want to go back to school in-person.”

Dan Gulak, Seber’s father, said it was an experience that he, his family, his granddaughter Amy, and all the graduates will always remember.

“This is the kind of experience that will be talked about in future generations because it wasn’t your regular graduation,” he said. “This definitely was different and it was made very special.”

Marinelli also she has received positive feedback after the drive-thru ceremony and that many educators and parents are pushing to have it done each year.

“It’s amazing that despite the difficult time everyone has gone through these last few months, something so beautiful and positive can come from it.”