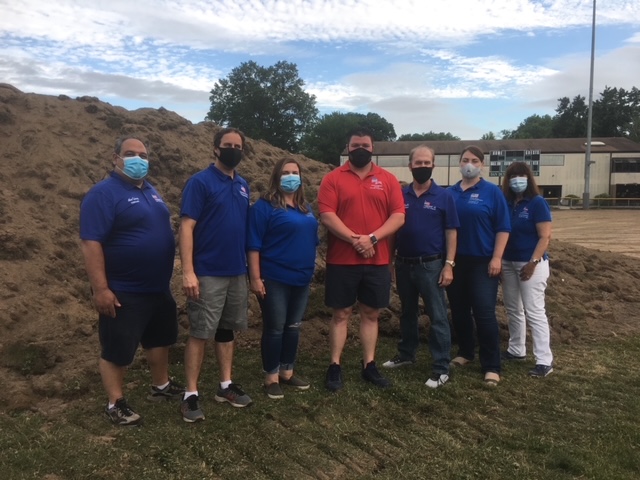 Pictured is Little Falls Mayor James Damiano and the Township Council in front of the renovation site at the Sports and Recreation Complex, which is one of the major recent upgrades in town. 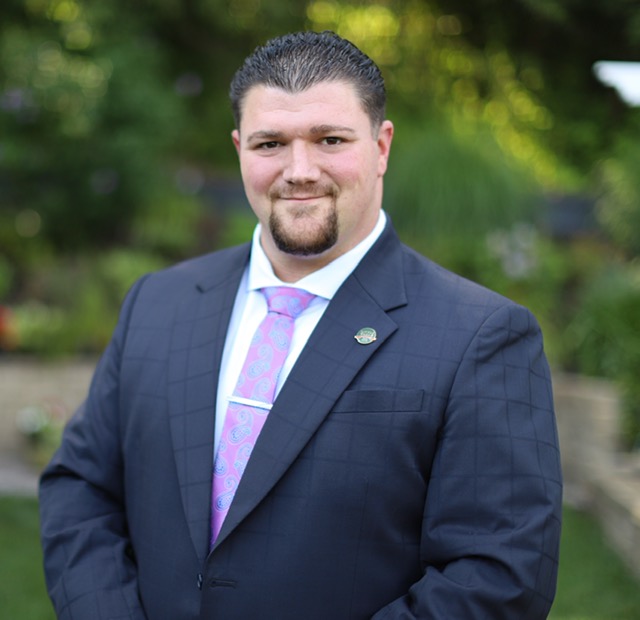 Mayor James Damiano held his State of the Township address at the recent Little Falls Township Council meeting on Jan. 25. Damiano thanked residents for reelecting him and congratulated Council President Anthony Sgobba for his reelection, as well as Councilwoman Christine Hablitz on her election to the Township Council.

Despite COVID-19’s unprecedented impact on lives and the economy over the past year, Damiano highlighted accomplishments made by the Township and looked forward to the coming year. He said the pandemic “registered historically low revenues to the Township” but that it was not unique to Little Falls. He emphasized that every town, as well as the country, would need to prepare for these impacts to the 2021 budget. Substantial shortfalls in the amount of $2 million would need to be addressed over the course of the next several years by the Township but added the Council would ensure that there would be little impact to residents.

Improvements to the town were made with no local tax increase, Damiano added. Among some of the strides he highlighted include the new Farmers Market, Concerts in the Park series and its outdoor movie nights. He also acknowledged the Little Falls Public Library is continuing with virtual events until it can finally allow in person attendees.

“These events will continue to grow as we make Little Falls better each day,” he said. He thanked Councilwoman Tanya Seber and Councilwoman Christine Hablitz for coordinating the Farmers Market. He also acknowledged  the Little Falls CERT Team for ensuring that masks were worn and attendees remained safe at all major events in town and the Alliance for a Better Community (ABC) for their diligence at the Concerts in the Park.

Damiano discussed the Township’s “substantial facelift” over the past year with the Sports and Recreation Complex’s upgrades and improvements, particularly the addition of a synthetic turf field, improved viewing areas, new storage facility, air-conditioned recreation center, and Pickleball courts all made possible through grant funding.

“I am thrilled that the costs of these improvements were offset by over $1 million in grant funding,” he explained. “These facilities will be utilized over the years by children and adults of all ages in our constantly expanding adult and youth sports programs.”

Damiano thanked Recreation Director John Pace and Assistant Recreation Director Tyler Passero for overseeing the Recreation Department during its expansion of programs. In adapting to the pandemic, he said the department implemented a virtual recreation program for residents of all ages to remain active from the safety of their homes. The addition of a newly installed Pixellot Camera System would allow parents, family and friends to watch their children play indoor sports while limiting the number of people in the building.

“It’s a system that can be used to years to come, allowing loved ones who can’t make the game in person to watch from anywhere on the new app based system,” he added. He thanked Councilman Al Kahwaty for spearheading the project and getting the Township up and running for the onset of the indoor sports season.

Damiano said the Township has continued to work with developers towards “revitalizing, upgrading and enhancing the Township in a positive direction,” adding that the efforts are simultaneous in helping ensure the financial future of the Township by taking it in a positive direction. He emphasized that the Singac Redevelopment along Main Street and other developments, such as Autumn Point and the former Paul O. Abbe, Inc. site, have had no impact on the schools, which he felt was a concern to many residents.

“These two projects totaling 74 units, each unit with an average value in excess of $450,000, have added only two children in total to our school district,” Damiano noted.

Some line item improvements Damiano discussed was the authorization of funding for road reconstruction, improvements to the sanitary sewer system and municipal facilities, including various upgrades for all departments. He said the Township was able to spend roughly $750,000 via the CARES Act, all of which was reimbursed by the Federal Government for purchasing sanitizing machines, UV Lighting systems to kill viruses and bacteria inside public buildings, and the addition of glass to keep the public and Township employees safer. The addition of a new Computerized Dispatch System to local police and fire departments was also added in order to make responses to home and businesses as safe as possible. He emphasized that all the improvements to the town were made with no local tax increase to the Township.

Damiano touted the LFPD as a model for surrounding towns on officer safety and ‘COVID-Shifts” which kept officers safe, preventing the spread of COVID throughout the department while keep residents of the Township safe. He also said the LFPD, led by Chief Steven Post, continues to maintain its accreditation as a department due to the policies and procedures that have ensured the safety of the department and residents. He thanked all the employees of the Township who ensured that the Township remained up and running throughout the entirety of the pandemic.

The Peckman River Project also reached historic progress regarding funding this past year, he said.

“I have continued to work closely with the Army Corps and our Congresswoman Mikie Sherrill to finalize and fund the plan that will address and hopefully eliminate flooding caused by the Peckman River,” he explained.  “This is relief that many Little Falls residents need to help them sleep better at night, knowing that their home is not one torrential downpour away from flooding.”

The Township plans to break ground on the start of its Streetscape Improvement Project, which Damiano hopes will span the entire the length of the town in the coming years.

“I am thrilled to get this project underway, which will begin to bring curb appeal back to the Township that had been slowly vanishing over the years with its outdated curbs and sidewalks along Main Street and surrounding streets,” he said. “I am excited to see the progress on these projects over the next year.”

A used ladder truck was also purchased, which will be housed at Company 1 on Wilmore Road.

“Company 1 is in the process of remodeling their garage bay to house this truck, which will provide a tremendous benefit and a second ladder truck to the Township’s fleet of fire vehicles,” he explained.

Damiano added that the LFFD and EMS squads now have one full year of shared services being provided to Elmwood Park, in what could be the most challenging year ever for EMS squads.

“The LFFD has continued its full-time paid EMS Service, which has substantially reduced response times for our emergency medical responders. That was particularly important in these unprecedented times,” Damiano said, adding that the service continues to generate revenue while employing individuals for the Township. “The men and women of our Little Falls Fire Department and EMS Squad deserve the recognition of the residents of Little Falls more than ever, and there has been no worse time in recent history to work in this capacity while providing this incredible service for all residents here in town.”

Damiano said there have been no cases of COVID-19 having been spread to any EMT employed in the Township while on duty and working in their professional role. He commended Fire Chief Jack Sweezy for implementing safety policies for the Department and keeping the men and women of the LFFD safe. He also thanked the Clifton Health Department for guidance throughout the pandemic and continuing to provide services to the Township with the initiative of getting residents vaccinated.

Damiano said he has continued to meet with the DOT on traffic issues caused by the Route 46/3 construction project to ensure the project continues with little delay and that substantial progress is being made through the pandemic.

Additionally, the installation of the first speed humps as a pilot initiative is planned, along with continuing to update ordinances to ensure that stop signs are appropriately placed throughout the town wherever necessary. Damiano thanked Councilman Chris Vancheri for his continued dedication to the transportation related issues in the municipality.

Damiano assured that he remains dedicated to the Township’s promise of transparency with numerous virtual Town Hall-style meetings on Facebook Live.

“I hope to continue these into the future as we work to keep the residents abreast of all the incredible things happening here in town,” he said.

Damiano said afterwards that he looks forward to delivering the State of the Township to the residents in Little Falls every year because it gives him the opportunity to really sit down and think about the accomplishments, as well as the shortfalls, of the year prior.

“More importantly, it really forces me to sit down and think about the years to come, and what I envision this Township looking like in one year, five years, and twenty years down the road,” he said.

Damiano also said reflecting on the past year has made him especially proud of what was accomplished in the Township in light of the pandemic that “has consumed so many of our lives, many for the worst.”

“The support of the residents of Little Falls and the Township Council has made my tenure here as Mayor something I can look back on and say that I had a very positive first term, and really look forward to what the next four years have in store.”