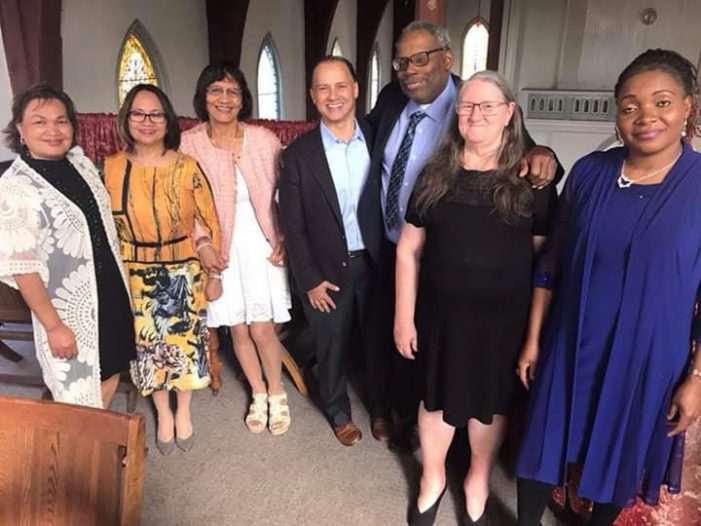 Keith Hines has been a local fixture in Livingston for nearly half a century. Through his work as Co-chair of the Livingston Committee for Diversity and Inclusion (LCDI) and 40 years at Carnevale’s Gulf Service Center Station on South Livingston Avenue, Hines is known as someone dedicated to service.

At the LCDI Hines sometimes donned a shirt and tie and put his head together with politicians and other local leaders to identify and fix problems in the community. By day, at Carnevale’s, Hines put his skilled hands to work. Through volunteer work and a career as a mechanic, he was able to do two things he loved to do, help people and work on cars.

“I grew up around cars, working at a gas station. I first learned how to help with little things,” says Hines. “Bleed the brakes, change the tires, stuff like that, and then I started to get more interested. No school, no college, I learned on my own.”

Hines and the LCDI recently announced that he is retiring from his post at the community organization. Predictably, he has already found a new way to serve the people in his orbit. He was recently named a deacon at First Baptist Church in Milburn.

Keith Hines joins Richard Hines, pastor at First Baptist Church, a man who shares his last name and commitment to ministry. Pastor Richard Hines and Deacon Keith Hines, no familial relation, both report that they are brothers in Christ.

Altruism is a defining trait of Keith Hines. That is why he spent years at the LCDI, working on projects that both celebrate diversity and help bring the local community together. He wants to be in a position where he can affect change. That is part of what led him to First Baptist Church.

“On December 17th, 2017, it was the first time I visited First Baptist. My wife, Carol, and I fell in love. I didn’t grow up Baptist, but I felt like I had a place there,” says Hines.

Over the last two years Hines has become indispensable to First Baptist Church. If there is a problem, Keith Hines, the man who spent years attacking issues both in the community and under the hood, will lend a hand.

Pastor Hines knows what he has in Deacon Hines. He is thrilled to have a problem solver like Keith join him at First Baptist.

“I’ve been here for 44 years,” said Pastor Richard Hines. “And we’ve fought water for all 44 years. Keith is supervising the fix and trying to make a functional classroom.”

Getting to know each other over the last couple years, Pastor Hines is still consistently astonished by the things Keith Hines can do.

“He’s a master at seeing things that need to be done, and he knows how to fix them,” says Pastor Hines. “Keith has a knowledge of every technical subject.”

Deacon Hines helped identify a problem with the aging sound system, and according to Pastor Hines he helped modernize the church’s microphones and amplifier.

“We now have roving mics that were useful at a recent memorial service. People passing the microphone to say a few words, Keith helped make that happen.”

Hines helped fix plumbing and electrical issues that have given Pastor Hines problems for years.

“He does it all,” says Pastor Hines. “Keith even did some masonry work for us.”

Deacon Hines does not only focus on the physical church. He also dedicates himself to the members of the congregation.

“There’s a veteran who was having difficulty getting to work. Keith helped him get his car repaired. That’s the kind of thing that Keith is happy to do.”

When asked about some of the things he has done to help others, Hines responds like only a true altruist can, “They treated me very well in Livingston. And being a deacon is truly rewarding. I’m lucky. I am blessed.”