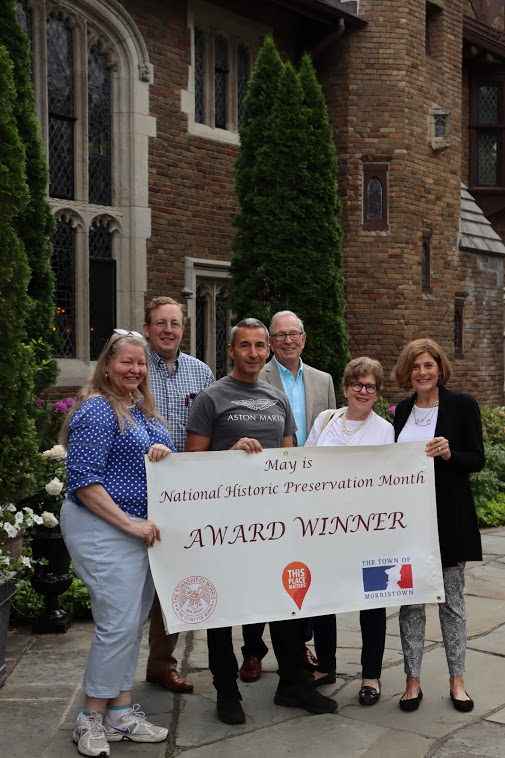 Located in Morris Township’s Convent Station, Glynallyn has withstood more than a few tests of time, and this award is commendation for the painstaking restoration done by current homeowners and “current conservators,” Joseph and Cathy Cetrulo. Longtime residents of the area know Glynallyn was once home to General Drafting Corporation and was also a Mansion in May in 2012. But the home was originally built by the George Marshall Allens.

George Marshall and Grace Fanshawe Allen lived during Morristown’s Gilded Age (1895-1929), along with another 100 families of equal fortunes and means. Born into a wealthy family, Allen made additional treasure in a combination of enterprises including color printing (a newly created art form) and developing the electrical grid of Bermuda–playground for the rich and famous.

In 1914 Allen embarked on one of the most massive single-family residential projects in New Jersey’s history. Like many of his social class he was enamored of English gentry life and in his travels found a pristine 15th century Tudor castle in Northumberland – Compton Wynyates – that became the template for his 32,000 square foot home.

Allen hired New York-based architect, Charles I. Berg, better known for his skyscrapers. Allen took several trips abroad to collect artifacts to weave into the new home. Among his many finds were paneling from Compton Wynyates and a 16th century family crest from his wife’s British family. The Allens’ daughter Loraine was married here at one of Morristown’s most elaborate and memorable weddings in 1917 just as the mansion was completed.

The Cetrulos sourced materials worldwide to replace or replicate the original architectural features and hired craftsmen capable of restoring plaster ceiling designs and brickwork to original form. They also, wherever possible, returned doors and gates to their former places and repaired dumbwaiters and other pulley systems to make them functional again. Many other features like lighting, statuary and the sundial remain in place and the Allens would be familiar with the home were they to visit Glynallyn today!

The Gilded Age of Morristown ended around 1930. A newly enforced income tax in 1917 and the Stock Market Crash of 1929 strained fortunes of the wealthy in America. By 1935 almost half of Morristown/Morris Township’s 100 mansions were razed. Today, just 26 exist and that is only been because of adaptive re-use of these opulent residences.

With the 2021 award, the Morristown and Morris Township Historic Preservation Commissions honor and thank the Cetrulos for restoring Glynallyn according to the highest standards, and the building to its original function as a single-family residence. Due to their efforts Glynallyn will remain an important part of our rich local history.