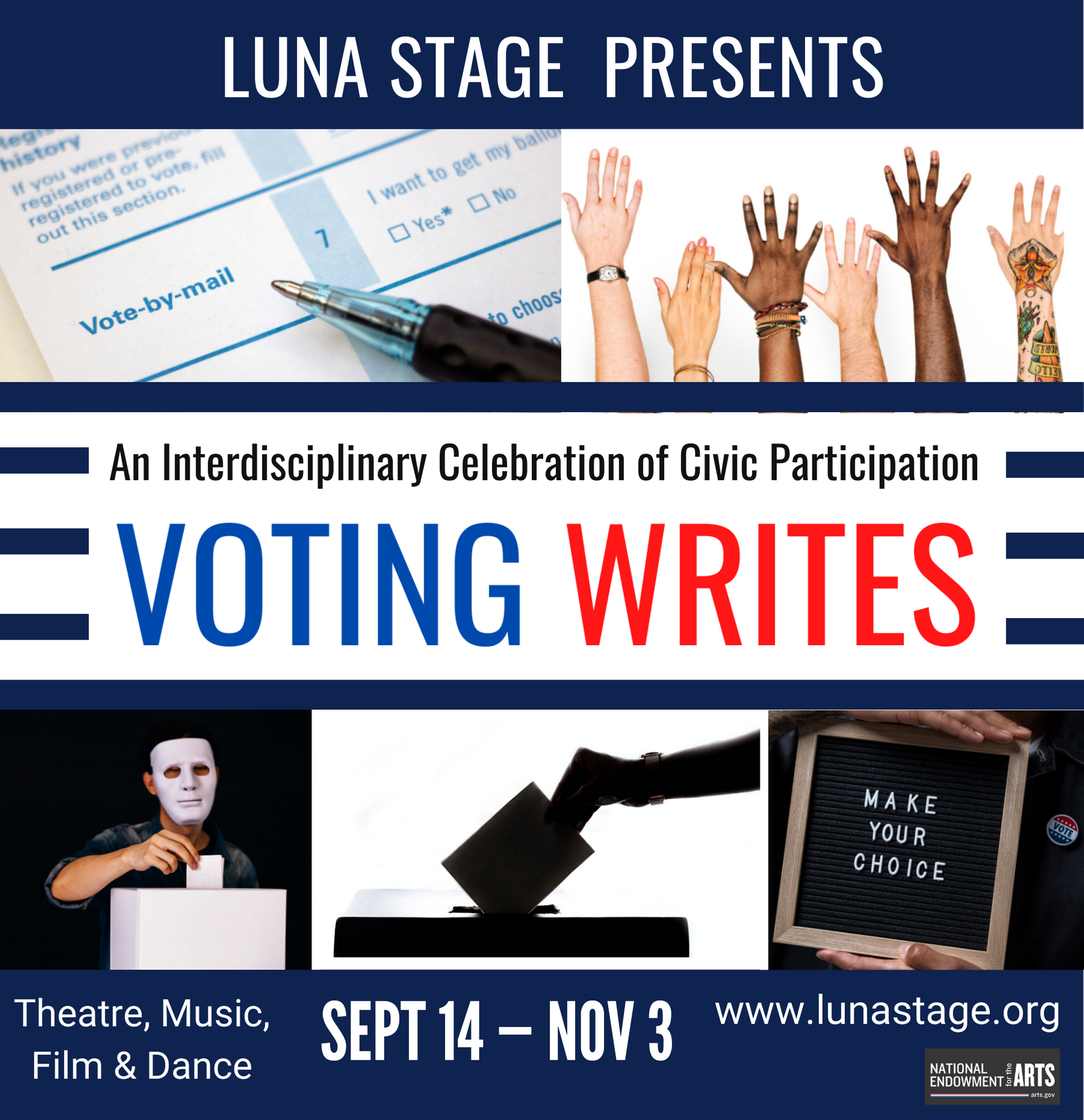 Luna Stage debuts its ambitious, two-month-long Voting Writes Project, a series of interdisciplinary performance events celebrating civic participation. This multimedia experience celebrates democratic participation in advance of the November 2020 election. The Voting Writes Project was created in collaboration with the Andrew Goodman Foundation with support from the National Endowment for the Arts.

“We’re telling stories of single women losing the right to vote in New Jersey in 1807, of the Masked Election during the pandemic of 1918, of voter suppression in the past three months, and of the challenges and glories of vote-by-mail,” says Artistic Director Ari Laura Kreith. “At this pivotal moment in our country’s history, we are honored to collaborate with so many extraordinary artists and activists to highlight the importance of voting and the power of democracy.”

The original 9-song cycle concept album Songs of Suffrage will serve as the musical soundtrack to Voting Writes. Modeled after Woody Guthrie’s Dust Bowl Ballads, these songs share short history lessons about voting rights and repression alongside songwriter Jim Knable’s personal exploration of his own relationship with voting. Starting September 8, Luna will showcase a new track each Tuesday leading up to the election, and the entire album will be available for streaming and downloading in October.

On September 17, Luna Stage will present The Breakout Room by Bernardo Cubria, the first in a series of world premiere plays. In The Breakout Room’s dystopian reality, people who don’t register to vote are condemned to a Zoom breakout room where all they can do is wait. Other works will premiere on Thursdays throughout the fall months. In My First Time by Jenny Lyn Bader, three generations of women face personal milestones in the sweep of political history. Kaela Mei-Shing Garvin’s Count Me In will be an interactive, live Zoom event examining votes that ultimately weren’t counted, inviting audience members to dream up solutions together. Playwright Rachel Shapiro Cooper’s Another Number in the Pool, based on collected interviews, aims to answer why people vote and why they don’t.

Luna begins its short film premieres with filmmaker Maggie Borgen’s Teen Voting Writes, an interactive project in which teens and young adults from across the country discuss the importance and meaning of voting. Luna will share Borgen’s short on September 14, with other films to follow on subsequent Mondays including Mail-in Ballot Breakdown, made in partnership with the League of Women Voters of the Montclair Area; and The Power to Vote, a short documentary about Boris Franklin registering to vote for the first time after incarceration and reflecting on what voting means to him.

Fifty days before the November election, Luna will host the 50 Days/50 States Virtual Social DisDance Party on September 15 at 8pm EST, in conjunction with St. Louis-based activist arts collective Dance The Vote. This Zoom celebration will welcome guests from all fifty states dancing together while physically apart. Attendees can cut a rug with people from across the country as they learn how to check voter registration and get information on key dates for voting in every state. Dancers can dress up to represent their state, create a Zoom background that highlights why voting matters to them, or come as they are for the socially-conscious, custom DJ mix. Social DisDance is hosted by The Dance Cartel veterans Sunny Hitt and Ani Taj, and producer Jenny Gersten.

The Voting Writes Project is supported in part by The National Endowment for the Arts and is created in partnership with The Andrew Goodman Foundation, a nationwide philanthropic group dedicated to promoting voting rights and encouraging civic participation.

Luna Stage will unveil Voting Writes offerings on its website and social media platforms from September 1 through November 2, with Speak On It’s live performances slated for October 2-4. For the full calendar or more information, visit lunastage.org/voting-writes.