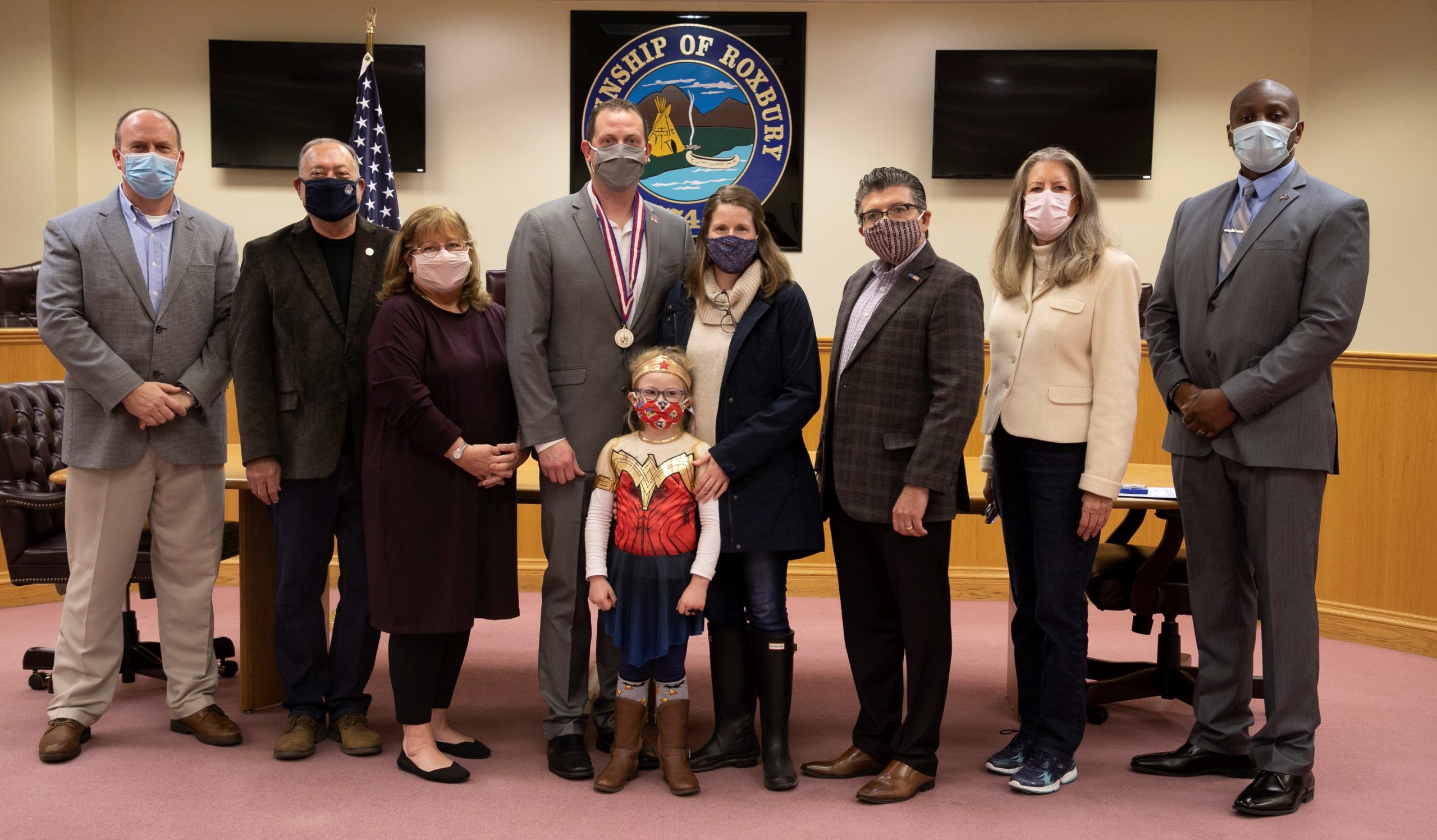 The Morris County Freeholders joined state Senator Anthony Bucco and Roxbury Mayor Robert DeFillippo in bestowing honors on Veteran Jonathan Snyder of Succasunna, a cyber-security and cyber warfare expert whose talents were applied during his 15 years in the U.S. Marine Corps and his continuing service with the New Jersey Army National Guard.

Snyder, already decorated numerous times by the military, received the new honors at a small ceremony inside the township council chambers at the Roxbury Township Municipal Building, where he was joined by his wife, Lauren, and their daughter, Scarlett, 5 years old. They also have a 1-year-old son, Sean, who remained home with his grandmother.

“Less than one percent of our American population puts on the uniform of our country to protect us, and you chose to wear that uniform and join that small group of men and women,” said Senator Bucco. “I’m here to today to say thank you for your service and to present to you a Joint Senate and Assembly Citation recognizing your years of service of protecting our country and keeping it safe. God Bless you.”

Snyder, who has been working in cyber security since leaving the Marines in 2015, is now a Senior Director for a leading cyber-security and consulting firm. He joined the Marines in January 2001, and he was deployed to Iraq in support of Operation Iraqi Freedom in June 2005, serving in combat operations until May 2006. He was later deployed to Afghanistan in support of Operation Enduring Freedom in June 2011, serving until July 2012.

“You served 15 years in the United States Marine Corps participating in combat operations in Afghanistan and Iraq. You also spent three years of that service working on Counter-terrorism probes, as well as National Security and Criminal Cyber intrusions,” said Freeholder Kathryn DeFillippo, a Roxbury resident. “You also have continued your service by remaining in the New Jersey Army National Guard.  For that dedication to protecting our nation, we present you with the Morris County Distinguished Military Service Medal.”

Snyder’s service in the Marines also included three years as an Intelligence Analyst in the FBI’s New York Field Office from, working on both National Security and Criminal Cyber intrusions, in addition to Counterterrorism investigations. After leaving the Marine Corps, he enlisted in the New Jersey Army National Guard, where he still serves.

“I think it is important to note how much of your work involved protecting our nation from cyber terrorism and crime. Your expertise is cyber security, and you remain a Cyber Warfare Technician,” said Freeholder Director Deborah Smith. “I’m also proud to say that you have been an adjunct professor of Information Security at our own County College of Morris – apparently the only two-year New Jersey school designated as a National Center of Academic Excellence in Cyber Defense Education. So congratulations County College of Morris as well as Mr. Snyder.”

Until earlier this year, Snyder was an Adjunct Professor of Information Security at the County College of Morris, which is the only school in New Jersey designated as a National Center of Academic Excellence in Cyber Defense Two-Year Education.

“You bring honor to our town … Thank you, sir, for your service,” said Mayor DeFillippo, after reading a township certificate of recognition and handing Snyder a commemorative coin.