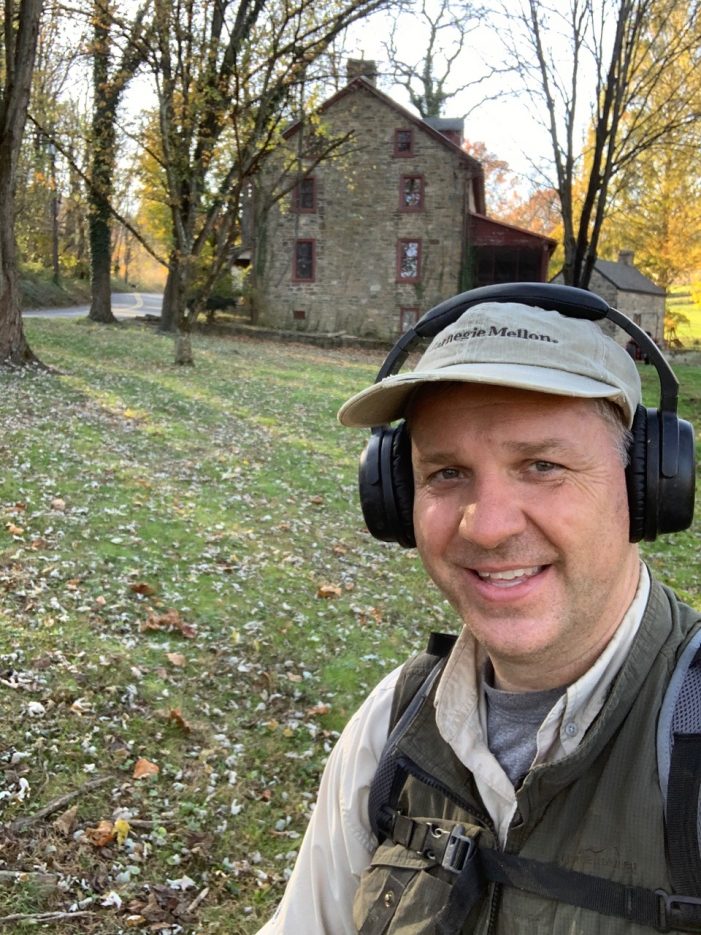 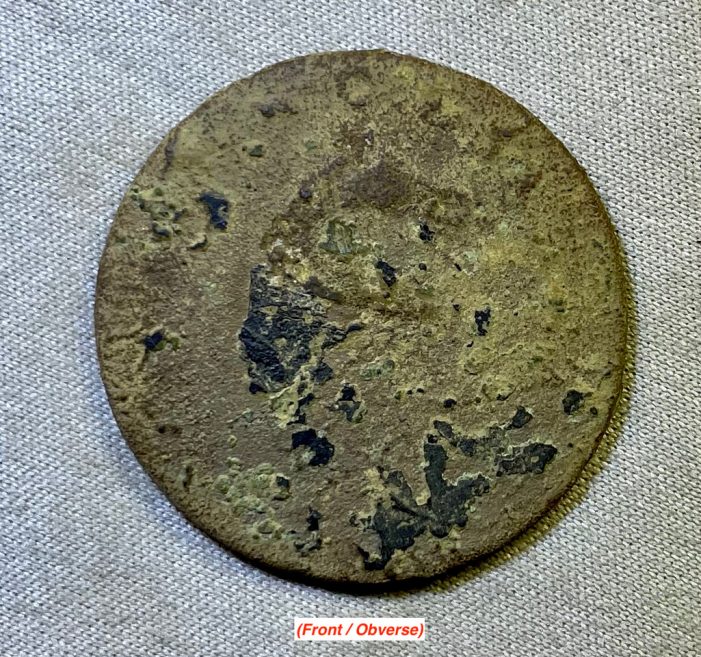 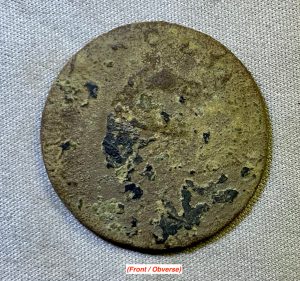 Brian Cox of Mendham has often seen people on the New Jersey beaches walking along the sand with metal detectors. Most of these people are just looking for some loose change.  Though Cox did start this interesting hobby roughly the same way, finding the ultimate treasure is something he does not take lightly.  According to this metal detecting enthusiast, he is not looking to strike it rich but the hunt for unique items is its own reward.

Cox has not recently struck gold, but his latest discovery is gaining the attention from fans of the hobby, local media, and historians.  In a yet to be disclosed location in Long Valley, Cox used all his skills along with his love of research to find a New Jersey Copper Coin from 1787.  The coin is often referred to as a “state copper”, by local history buffs.  As seen in the photos, this large copper coin has gone through much wear and tear due to being in the ground for over 200 years.

Cox said that even though the coin is in “poor condition,” and does not carry any significant monetary value, the “coin is special.”  One of the main reasons Cox knows this coin is unique is because he has studied the history and subject matter of this treasure in great detail.    Cox has admitted he finds the background of the objects he finds such as this one to be “incredibly exciting.”

According to him, there was no U.S. mint in 1783, but some states were granted the right to make such coins.  These states were Vermont, Connecticut, Massachusetts, and of course, New Jersey. Therefore, since only several hundred such coins were manufactured, the probability of finding a coin nearby in Long Valley is incredibly low.  Cox therefore has taken great pride in this recent discovery and concluded that “for me, it (the New Jersey coin) is probably the only one I’ll ever find in my life.”

Cox has not yet disclosed the specific location of his discovery in Long Valley because he operates his activities very ethically.  First off, since he found the coin on private property, he does not wish for any unwanted attention for the property owners.  These owners were gracious enough to give him permission to search the land and Cox wants the public to know he would never trespass in search of any valuable. The same holds true for public parks or national landmarks.  He always makes sure that wherever he goes, permission is granted.

Cox also wants to acknowledge Derrick Backer and his family for always encouraging him to search for items on their beautiful farm in Mendham. They have also supported his postings on social media pages to educate others on local history.

In the past, Cox has found other valuables such as two wedding bands made with 14 Karat gold.  He was also recognized recently for finding a 1983 class ring from Wardlaw + Hartridge School made up of 10 karat gold.  Not only did he find this gem at a sports field in Mendham, but he took the time and diligence to find the rightful owner.  In both cases however, this gentleman from Mendham did not ask for any compensation.  “I don’t sell anything,” said Cox.

According to Cox, he is not looking for any profits or financial gain from his findings. This is simply something he loves to do. Cox began this activity about ten years ago with his child Andrew who was 8 at the time. They would spend much of their summer at Bethany Beach in neighboring Delaware finding different coins.

Though his son is now an adult pursuing his own passions, this family hobby still strikes an emotional chord for Cox.  “The things you could find are amazing,” said Cox. He also wants the residents of Mendham to feel free to reach out to him if they believe there is something valuable on their property.  Cox would love to assist and help discover more aspects of Mendham’s rich history.

Cox is not a teacher or historian as one might guess. Though he loves history and educating himself and others about local memorabilia, his career is in a completely different realm.  He spends his weekdays working in the tech space for a venture capital firm evaluating start-ups and helping those businesses make strides in their respective fields.

Cox is content to keep his metal detecting activities a hobby and realizes there is a lack of certainty as to what he may find next.  However, that doesn’t seem to bother him because he loves the thrill of searching for interesting items. “This is my own little version of treasure hunting.”